In addition to passing more on 1st Down, UGA has a higher success rate on 1st down passes than 1st down runs.

1st Down Success measured where play gains 50% yards to go. Dawgs have a success rate of 57% on first down rushes – which is pretty damn good. But on the 50 passes on 1st downs, UGA has a success rate of 72%!!! 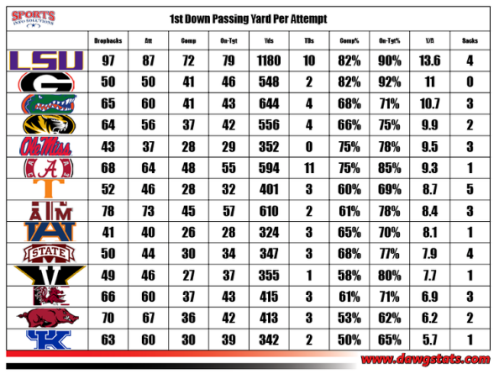 Overall, Georgia is throwing the ball on 38.5% of its first down opportunities through its first four games of 2019, compared with 32.8% last season.  So, Coley has made an effort for Fromm to throw more early, perhaps to take some pressure off from opponents loading the box to stop the run, and been rewarded with a next level effort from Fromm.

If you’re wondering why Coley isn’t even more committed to the pass in that situation, consider that Georgia is rushing for 7.34 yards per carry on first down this season.  When your average rush is setting you up for second and two or three, it’s kind of hard to brush that aside.

But, yeah, when the average yards per pass attempt on first down is over eleven, I’d probably throw the ball more there, if I had my druthers.  Either way, it’s a good problem for Coley to have.

12 responses to “Unleash the hound”