Not with a bang, but with a misread

This really was the perfect end to a day full of whiffs.

And a the last offensive play of the game. Swift was open for a possible TD pic.twitter.com/4XzUleeWgs

Well, by the offense, anyway.  Rodrigo still had his capper to come. 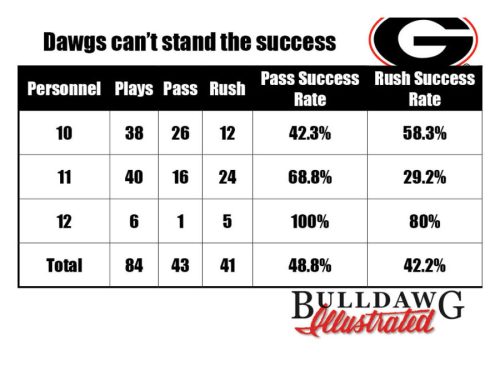 Obviously, there were some issues out of 10 and 11 sets.  My question for you guys is, assuming Coley is getting fed this information in real time up in the booth — and I sure as hell hope he is — shouldn’t some adjustments have been made in favor of what the players were doing better?

If this is what Kirby was referring to with regards to the coaches helping the kids play better, he’s certainly got a point.

Okay, fine if you want, but if your team is that weakened, isn’t that more reason to find something other than the pound and ground game that was sputtering?  (Sarcasm, in case you’re wondering.  Georgia’s problem yesterday wasn’t generating sufficient yardage.)

More relevantly, it still doesn’t excuse losing to a team on its third-string quarterback who was limited to about three play calls.

I’m sure I’m hardly the only one walking out of Sanford Stadium yesterday who felt like Jon Lovitz’ impersonation of Michael Dukakis.  Georgia dominated the raw stats:  outgained SC 468-297; first downs advantage of 30 to 16; held the ball for over 36 minutes; managed a 50% third down conversion rate; etc.  In regulation, South Carolina didn’t run a single play in the red zone.

In short, good ol’ manball worked.  Until it didn’t, that is.

Sure, a lot of that can be chalked up to the four turnovers, three of which were absolutely brutal.  And Kirby was quick after the game to put blame for the loss there:  “You can’t go 4-0 in the turnover margin and expect to win a game. It just doesn’t happen.”  That’s interesting, because I could have sworn I saw his team playing for the win after turnover number four in overtime.  But I digress, somewhat.

My fear, from listening to all the post-game chatter about looking in mirrors and coaching better and playing better, is that Smart is going to ask and try to answer all the wrong questions and ignore the important one.

But manball is merely a means to an end.  So when Kirby utters something like this,

Kirby on running on 1st and 2nd down several times 💬 It’s easy to come in after the fact and say o you shouldn’t have done that. When the strength of your team is your RBs and O Line, you try to pound it. pic.twitter.com/1DRwPtTBQH

… it’s easy to read that as seeing manball as an end in itself.  The problem with that kind of thinking is what happens when you run into the situation Georgia faced in the second half yesterday, down by seven and bleeding the clock while not producing any points.  Muschamp was happy that Kirby wanted to play manball because it helped him manage the lead.

Mike Tyson’s famous line about having a plan until you get smacked in the face is great, but nobody ever mentions how things play out when you’re the one smacking yourself in the face.  Kirby’s team hasn’t had smooth sailing throughout the season, but it’s always had the twin rocks of Fromm and Blankenship to build on and manage through those stretches when it hasn’t subjugated the other team.  Both players’ steadiness deserted them yesterday and there was no answer as third-ranked Georgia went down to an unranked 2-3 team at home.

That leads me to the question I believe Kirby needs to ask himself honestly.  Sure, the o-line needs to block better, the receivers need to catch better, Jake and Rodrigo need to have better days, the coaches need to prepare the players better, yada, yada, yada, but that’s all window dressing for Kirby’s gut feeling that manball can’t fail, it can only be failed.  That may help him sleep at night and keep going on the recruiting trail, but it’s not going to make any difference the next time his team slips and doesn’t put an inferior opponent on the ropes.

No, the question he needs to ask and answer is this:  how can I manage this team to a win in a game we don’t deserve to win?  Coaches steal wins every week; hell, that’s exactly what Boom did yesterday, to his credit.  You’d think a team with Georgia’s talent would have an advantage doing that, too.  But judging from Kirby’s turnover comment, I wonder if his heart or his head was ever in that mindset at crunch time yesterday.

I’m not a coach, and I’ve never been anything more when it comes to Georgia football than an interested observer.  It just seems to me that when your primary strategy flops, you’ve got to come up with a better Plan B than hoping the other guy screws up first.  I can only hope Smart sees things that way, as well.

You’ll find this week’s ballot here.  Note the new security questions and the time question at the end.  Also, just a reminder to carefully review your picks before you submit them.

This week’s results should be interesting, to say the least.