Ballots cast totaled 257, so, once again, there wasn’t a unanimous consensus around any single team this week.  Ballots averaged 9.1 teams this week, which has been consistent through all three polls.

Here’s the breakdown by conference: 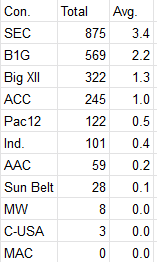 74% of us picked the Astros to win the World Series.