In the first nine games of his college career, Auburn quarterback Bo Nix averaged fewer than six yards per attempt five times. He completed less than 60 percent of his pass attempts four times. He threw at least one interception three times.

That trio of games have two things in common. They all were away from home for Auburn, and they all were against teams that are currently ranked inside the top 11 of the latest College Football Playoff rankings.

This Saturday, a fourth member of that top six, No. 4 Georgia, will play Auburn. Two weeks later, the Tigers will face No. 5 Alabama.

In those games, a crucial question about Nix, Gus Malzahn and Auburn’s 2019 offense as a whole will be answered — were the Tigers’ struggles in those games due to tough environments or tough opponents?

There’s a case to be made for a little of both — Nix says it’s easier to communicate at home and that seems like a safe bet.

But speaking of easier, Nix’ three best performances as measured by passer rating have come against Kent State, Mississippi State and Arkansas.  (The rest of his season falls between 75.85 and 133.09, which ranges from poor to average.)  Nationally, defensive passer ratings for those three teams rank 99th, 94th and 114th, respectively.  Powerhouses they’re not, in other words.

Georgia’s defensive passer rating coming in to the game is 107.94.  That’s ninth-best in the country.  But Nix is playing at home.

Thought this was kind of interesting.

(By the way, Auburn’s defense has only allowed one opponent all season, LSU, to gain more than 450 yards.)

Can Auburn run the ball effectively this Saturday?

You know Gus wants to.

That desire emanates from his bones. It is the essence of who he is as a football coach. Auburn has ranked outside the top 25 nationally in rushing attempts just once in his seven seasons as head coach. It currently ranks 19th nationally averaging nearly 45 per game.

“We’re a run, play-action team,” Malzahn said last month and also countless times before that. “We need to be effective running the football.”

That won’t change in the 124th edition of the Deep South’s Oldest Rivalry on Saturday, no matter how good Georgia’s run defense is.

“You can’t be one-dimensional,” Malzahn said Tuesday. “For us to be successful, we’re going to have to run the football effectively. That’s really how we’re built anyway. That’ll be a really good matchup to watch. And we’ll see what happens.”

Believe it or not — I had to double-check, to be honest — Auburn has more rushing attempts this season (401) than does Georgia (348).  For all that, the Tigers are only rushing for about four more yards per game than the Dawgs, because Georgia’s rushing average is more than half-a-yard per carry higher.

Checking the game log for Auburn’s rushing offense, there’s a noticeable slide over the past few games, interrupted only by moveable object that is Arkansas’ defense.  There might be a reason for that.

… Kerryon Johnson, who torched the Bulldogs for 233 total yards and a touchdown in 2017, was replaced by JaTarvious Whitlow. Whitlow has been dealing with a knee injury and didn’t play against Ole Miss. His absence has been filled by true freshman D.J. Williams…

With a Malzahn offense, you can expect to see the ball being run downhill with two other plays mixed in. With the Tigers missing their lead back as of last weekend, they will presumably rely on yet another true freshman in D.J. Williams. How big of a difference will it make if Whitlow is unable to go?

“A big difference. He’s a stud SEC back,” said Smart. “He’s physical; he’s hard to bring down. He makes their run game tick because their run game is meant to be powerful, downhill and bruising. The young kid has come in and done a good job of that, but Whitlow is a difference-maker for them.”

D. J. Williams has put up great numbers while filling in for Whitlow. The freshman has rushed for 303 yards in four games this season, with 130 and 93 yards coming against LSU and Ole Miss, respectively.

So Auburn comes into the game with a true freshman starter at quarterback and running back.  Nix runs the ball seven or eight times a game, enough to keep defenses honest, but in conference play hasn’t really had much of an impact in that regard, other than against Mississippi State.

Malzahn has had more to work with at times, in other words.

You know Kirby would like nothing more than to make Auburn’s offense one-dimensional, and there’s an argument to be made that he’s got the horses to do that.

That 2.77 yards-per-carry mark actually makes this Georgia defense one of the stoutest against the run that a Malzahn offense has ever gone up against. From 2013-18, Auburn faced only four teams that went on to finish the season holding opponents to fewer than 3 yards per rush — Alabama in 2015, 2016 and 2017, and Mississippi State in 2018. The Tigers ran for 91, 66, 168 (plus two scores) and 90 yards in those games, respectively.

The Advertiser notes that Auburn hopes to have a fully healthy Whitlow back this week, which would help, no doubt.  It will also be interesting to see if Gus has to resort to some of the other schematic wrinkles suggested in the article — throwing more to set up the run as well as attacking the edge to spread out Georgia’s defense.  Should make for an interesting chess match.

Today, in one of these is not like the others

SportsSource Analytics posted strength profiles for the current top four team in the CFP rankings.  Here’s what they look like: 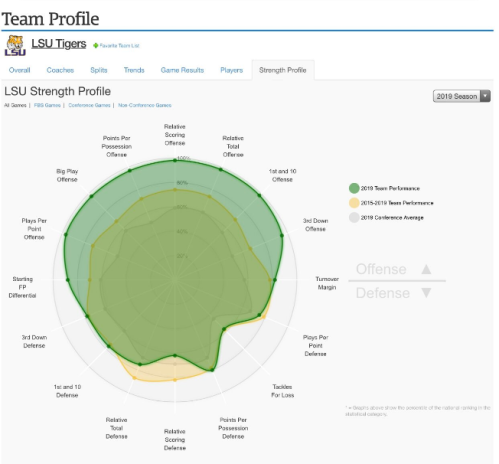 Of those four, it’s pretty obvious there which team’s greatest strengths don’t lie on offense.

I’ve mentioned Max Olsen’s stop rate metric ($$) before.  If you don’t remember, here’s his definition:  the percentage of a defense’s drives that end in punts, turnovers or a turnover on downs.

Week 12, here are the top ten teams in stop rate:

This week’s Georgia game, then, features the number three versus the number ten FBS defenses.  Safe to say that sustained scoring drives are going to be hard to come by for both offenses.

That should put a premium on not turning the ball over.  (Duh.)  The other thing likely to be magnified in a defensive struggle is field position.  Field position starts with special teams.  And special teams when nobody is scoring much means punting.

On paper, Georgia carries a slight advantage over Auburn, believe it or not.  Georgia ranks seventh nationally in punting (46.76 average); Auburn is 44th (43.35 average).  Georgia is tied for first in allowing the fewest punt returns, with only four, while Auburn has given up 11, which is only 55th (and, perhaps more alarmingly, has allowed its opponents a return average of 21.91 ypr).  Auburn has a slight (12.44 vs. 11.67 ypr) advantage over Georgia with regard to its own punt returns.

That’s all nice, but if there’s one characterization of Jake Camarda’s season, it’s that it hasn’t been one of averages.  Here’s what his game log to date looks like:

He has been the proverbial girl with the curl in 2019.  When he’s been on, he’s been terrific, and when’s he’s been off, he’s been off.  What’s most concerning there is that two of his worst games have come against the toughest opposition Georgia’s faced this season, in pressure packed situations.  Auburn surely qualifies as a similar environment, something the team’s veterans have been warning the younger players about.

How Camarda handles that is going to be one of those crucial items that ordinarily might be easy to overlook, but shouldn’t be.