… is something to behold. 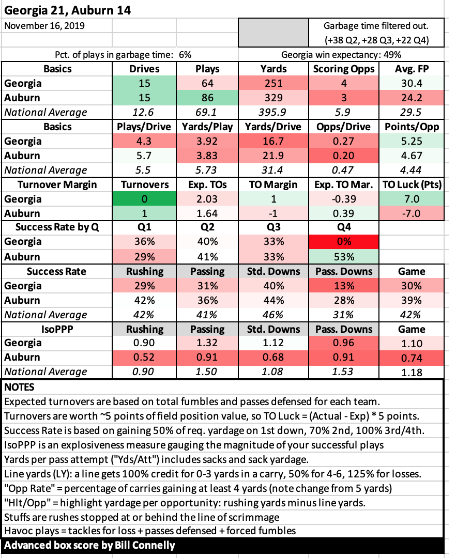 I wonder how often a team wins on the road against a top-15 conference opponent sporting a giant goose egg in fourth quarter success rate.

Kirby Smart also begins his press conference by apologizing for the F-bomb he issued in his postgame press conference. He said his wife wasn't happy about it, and that "it's not what I represent."

Although unnecessary, the “my bad” doesn’t surprise me.  Sadly, neither does a sentiment like this:

Yeah, as a huge Dawg fan, that put a big stain on the W for me. No classier than Gus’ comments from two years ago. Just makes us look Busch League.

Yeah, if you can’t win a big rivalry game without cussing, go home. I’ve come across more than a few folks like Mr. Post.

The Georgia Way has many doors, my friends.

You shouldn’t be surprised to read this.

Georgia Tech will face No. 4 Georgia before a national-television audience in a noon kickoff Saturday, Nov. 30. The annual meeting of in-state rivals will be broadcast on ABC, including Channel 2 Action News in Atlanta.

But you should be amused to read this:

It will be Tech’s first game this season off of cable television.

You know the marketing geniuses on the Flats aren’t going to let an opportunity like that pass them by.

From Kirby’s lips to your chest

Hot off the presses comes this stylish accoutrement. 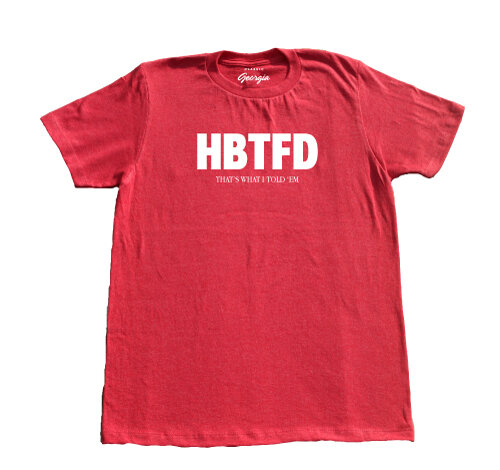 Wear it and be wonderful.

Observations from inside the orbit of Mars, Auburn edition

Why do I always seem to have Roger McGuinn’s guitar intro to “Eight Miles High” running through my head when I finally arrive at my seat at Auburn?  Before the game, we were joking that we could see the Atlanta skyline from our vantage point.

The walk out never seems as long after a win, though.

Bullet points for ‘ya:

Look, it may not have been as pretty as we would have liked, but any time you win a rivalry game on the road against a top-15 opponent, you’re doing a lot more right than you’re doing wrong.  This team is going back to Atlanta, an outcome many were questioning after the South Carolina loss.  It’s also managed to do this without a smoothly functioning offense, which makes you think there’s still room for improvement.  I can live with that.

It’s not easy always being right.

One thing you gotta love about college football — where else can the media grumble about players sitting out meaningless bowl games to protect their pro futures and turn right around and give Saban grief for not taking Tua out in the second quarter of a conference game?

South Carolina football coach Will Muschamp admitted that where his team sits is not where it should be.

The Gamecocks’ history might not include much contending for SEC titles, but missing bowls is never accepted.

“It’s frustrating,” Muschamp said. “It shouldn’t happen — call it like it is — at South Carolina. Never would’ve envisioned this. This is where we are right now. We’ve got to continue to play hard, coach hard, get ready to play Clemson.”

It had been a trying week around South Carolina in terms of public perception and discussion.

New school president Robert Caslen spoke early in the week about Muschamp, saying he was the coach through the season, and then things will be assessed. It led to athletic director Ray Tanner issuing a statement Friday in support of Muschamp.

Some reports even said Board of Trustees members were talking to a potential replacement as USC’s athletic director.

I’m trying to figure out Boom’s best argument for keeping his job.  It’s either “I went 4-8 at Florida and came back for another season” or “who are you gonna get that’s better?”.  While both are true, neither is exactly a ringing endorsement for a triumphant return.

One can only hope that Kirby did Boom enough of a solid with that embarrassing loss in Athens.

Is this good? Asking for a fan base.

Gus Malzahn’s record of 6-15 versus the SEC’s Big Three—Georgia, Alabama, and LSU— is good for a winning percentage of 28.5.

I’m curious.  Back when Richt was in town, there was a consensus from a sizeable group that Auburn’s ups and downs were preferable to Georgia’s steadiness — that an occasional, truly lousy season was worth the price for playing for national championships every so often and beat a regular ten-win trip without the glitter.

In light of Auburn’s current state and Georgia’s, how many of you feel that way now?

Georgia’s in the SECCG and Tua’s out.  Just your normal week in the Southeastern Conference.