I didn’t realize this, but they’ve changed the voting for the Lou Groza award (h/t Tim):

This year, fans can have their part in naming the winner of the Lou Groza Award.  Fans can visit www.lougrozaaward.com and cast a vote for their favorite of the three finalists selected by the national panel of voters. The finalist who receives the greatest total of fan votes will be given one vote on the final ballot. One vote can make a difference in the final outcome so fans are encouraged to participate.

In case you don’t know what that means, here’s someone to explain.

Please go vote (and share) for your favorite banner-busting kicker in th Lou Groza Award poll! I need everybody’s help to take the lead back in the fan vote! (Link is in my bio too!)https://t.co/OX562EAAJB#RespectTheSpecs pic.twitter.com/A793EeZJel

This is how synergy works.

Really, is there a better summary of this year’s Georgia defense than this? 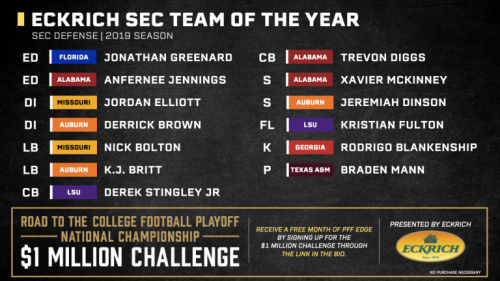 The SEC’s best defense this season doesn’t have a single Georgia player make that list.  What more can you say?

I did watch the replay last night, at least some of it, anyway.  I had two overriding insights from the experience.  One, Georgia’s defensive competence is off the charts.  It’s easy to brush off the end result as being little more than athletic dominance, but that’s not fair.

It was rare to see a gap not being filled correctly by the d-line.  Substitutions were regularly made without missing a beat.  Players knew the exact moment to pull away from a situation without having it escalate into a stupid penalty.  There’s a Tae Crowder pass break up that was literally executed to perfection, and considering what ILB pass coverage has looked like in season’s past, that was almost as exhilarating to watch as a quarterback sack.

If only I could say the same thing about the offense.  And there, indeed, is the rub.  Perhaps you’ve noticed I keep posting Jake Fromm’s comments about how close the offense is as QOTDs.  I don’t do it out of a sense of humor.  They’re not funny, because they’re true.

I just keep shaking my head over blocking, because it’s inconsistent from play to play and from start to finish.  I’m not exaggerating about that, either.  On the very first play of the game, when Fromm almost threw a pick-six (and was blamed on the broadcast for a bad decision), the play was designed as a quick hitter to the receiver.  The problem was, it was also designed for Kindley to get out and block the linebacker in order to clear the passing lane for Fromm.  He never got there.  Maybe that play repped well in practice, but Georgia was lucky it didn’t blow up for real.

That made me appreciate why Jake might not have been completely focused on the two throws that followed.

Another example — on the Dawgs’ first touchdown drive, Swift really got things rolling on a run to the right on his second carry.  Two receivers were out there blocking, Jackson and Landers.  Jackson got his block down, alright, but he blocked the defender whom Landers was supposed to block, leaving Landers standing around uselessly.  The play gained thirteen yards, but should have busted the Tech defense for a lot more than it did, if both guys had gotten their blocks down correctly.

On the next play, naturally, Jackson is lined up on the other side and nails a perfect block to spring Herrien for another nice gain.

You want more?  On that play I noted in yesterday’s Observations post, the one when Hill had to go out of the game because his helmet came off and Coley just loaded the o-line with road graders, leading to a big run by White, Mays is the center and absolutely destroyed the Tech defender he blocked.  On the very next play, Mays is back at right guard, moves opposite the way the play was run, a linebacker shoots the vacated gap and blows White up in the backfield.

Based on what I watched, I saw two noteworthy blockers — one was Hill, who they were actually using as a pulling blocker on occasion (a pulling center is something you don’t see every day) and doing well at it.  The other was Woerner, whom I never saw miss a block and was almost always involved in opening up any big play run to his side.  Maybe that’s why they don’t throw much to Charlie, because he’s too valuable as a blocker.

This stuff drives me crazy, so I can only imagine what it’s doing to Kirby Smart.  But, man, would I love to see a game where the offense plays as consistently as the defense.  Not sure a Georgia team doing that would lose to anybody.

In a sense, this list doesn’t matter, because Orgeron is winning SEC Coach of the Year in a landslide, and deservedly so, but still…

My SEC Coach of the Year rankings:

– 68% of this team is freshman/sophomores (youngest in the SEC).

…yet he still has them playing for a spot in the CFP for the 3rd year in a row. https://t.co/J9c7mf1EwJ

Not too shabby, right?

Very good point Paul.
He should have been on this list ahead of Pruitt now that I've given it more thought.

Has shot to win it all even with the offense not clicking on all cylinders…..(yet)

Should be ahead of Mullen, too, for what that’s worth.

We’re between Thanksgiving and Christmas, so that means we should all be thinking about what to get that special Dawg fan in our lives (all Dawg fans are special in their own way, amirite?).

I’m way past due on updating the Gift Guide page, so let’s get cracking on that right now.  Please give me your best suggestions in the comments and I’ll update the page accordingly.  As a reminder, please follow these instructions:

Make extra sure that anything you want to recommend to readers is still a commercially viable product.

To add your suggestions/endorsements, please compose a one-paragraph description of the item in the comments that includes your personal experience with it, along with a link to buy the item.

I’ll get things going with some recommendations readers have suggested in the past year that look page-worthy.  (I apologize in advance for not giving proper credit for two of them;  if you’re the source of the recommendation, please say so in the comments, so I can properly acknowledge you.)

It wouldn’t be a real Gift Guide update without a new beer recommendation.  You can’t go wrong with anything brewed by Creature Comforts, but the best malty beverage I’ve come across this year that’s an in state production comes from, of all places, Albany.  Pretoria Fields Walkers Station stout is excellent, if you like that style of beer.

Okay, enough from me.  Tempt us in the comments.

I have to admit I’ve found Stingtalk to be less enjoyable over the past couple of years than it was in the glory days, when, basking in the knowledge that Tech had really hired a genius in Paul Johnson, those folks really liked to strut their stuff.  They’ve lost a lot of mojo, sadly for them.

A specific, perfectly nerdy thing the Tech message boards used to specialize in were these convoluted mathematical treatises where they’d bend stats every which way to prove (using that term in its loosest sense) that a Jackets victory was inevitable.  Or, at least, that a Jackets loss wasn’t.  Some of those posts were real classics, even as they wound up being wildly off from reality.  Given the statistics Tech’s been generating of late, it’s no surprise they’ve gone the way of the dinosaurs.  Sigh.

So you can only imagine my delight in discovering this post, in which the author insists that a numerical comparison of this year’s ass whipping to last year’s proves, and I quote, “the improvement and the direction this team is heading”.  I think the dude means that in an entirely unironic sense, too.

They just can’t help themselves.

Based on a conversation with Petersen many months ago, I wouldn't be surprised if he points to the transfer portal as a frustration that pushed him to get out. Right or wrong, he though it taught the wrong lesson

Unlike the lesson taught when he left Boise State, I suppose.

Weirdly enough, it wouldn’t surprise me if he honestly believes there’s a real distinction.  It’s just part of their DNA as coaches.

If it ain’t broke…

Barring an upset in any of their respective conference championship games, that’ll be what my final ballot of this season looks like, too.

The irony of that is obvious:  it’s a good argument for a four-team playoff, even though I don’t find four teams worthy of consideration for being in the top class.  But a BCS-type arrangement would be doing a disservice to one of those three that do belong.

Ah, well.  At least it took me less time to cast my ballot than to type this post.

Michael Barnett on being underdogs to LSU: “Since the beginning of the season, everyone has counted Georgia out. What’s new?”

At the beginning of the season, Georgia was a top-three team in the polls.  The Dawgs have literally been favorites in every single one of their regular season games.  Even after the South Carolina loss, Georgia was still in the top ten, and now sits in the position everyone thought it would be in when the season started.

Sure, you guys may not have compiled the style points some of the other kids have, but nobody — at least nobody who’s unbiased — is dumb enough to dismiss you out of hand.  Let Dabo be the guy showing his ass playing the disrespect card.  You’re better than that.

Filed under Georgia Football, It's All Just Made Up And Flagellant