Looks like somebody threw away a perfectly good offensive strategy.

There is no statistic about Georgia’s offense this season that drives me crazier than this one.

For the love of Gawd, fellas, why do you do this to me?  Is it something I said?

“I don’t know that the adage defense wins championships stands as much as it used to,” Smart said. “When you saw scores from the ’60s and the ’70s and the ’80s and you saw scores of games, it was indicative of defense, compared to now. Now, it’s like I got to play pretty good defense and I got to score a lot of points.”  [Emphasis added.]

Hunker down one more time.

Hear me out.  I know most everyone is laser-focused on whether Georgia’s offense will have enough of a pulse come Saturday to make a real game of it, but I grow more and more convinced that the key matchup will be on the other side of the ball.

To state the obvious, the Georgia defense/LSU offense collision is definitely a strength vs. strength deal.  Check out these advanced stats, in case you need further convincing. 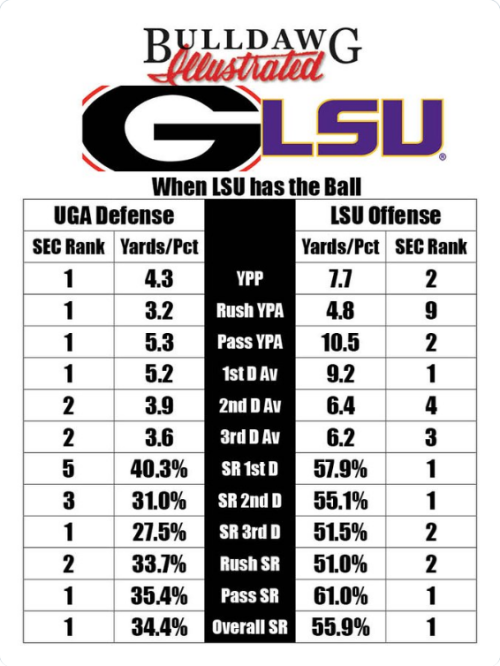 Those stats are real, and they’re spectacular.

Bill Connelly’s SP+ calls for a final score of LSU 29, UGA 26.  My question boils down to whether Georgia can do something to shave that LSU tally south of 26 points.  Maybe, just maybe, that Dawg defense can.

It’s gonna be a daunting task, though.  It’s not just that the LSU offense is hell on wheels.  It’s also that it’s structured by nature to work away from Georgia’s greatest defensive strength, stopping the run.  The Tigers’ offense uses the pass to set up the run.  (With that quarterback and those receivers, who can blame them?)

Burrow will operate out of 4- and 5- receiver sets all game long.  Georgia will likely be forced to counter with its dime package for most of that.  That’s going to keep some key personnel off the field more than Smart and Lanning would like.

Fortunately, there is some depth at cornerback due to Tyson Campbell’s injury situation.  There’s also some additional talent that will have to be relied upon.  For example,

🎬 Room Pt. 2: A thread on why Tyrique Stevenson could be the key to UGAs success Saturday pic.twitter.com/OJPShPllzn

I don’t worry about the ability of Georgia’s defense to prevent the big play.  They’ve been doing that all season.  But what LSU does to attack the middle of the field with its passing game?  Yeah, I worry about that.  The Dawgs are going to have to make adjustments to take away the slant pass that has seemingly been a problem all year.

That’s all well and good, but it’s still not the matchup I referred to at the beginning of this post.  For that, take a look at this video of the SEC Network’s Marcus Spears.  It’s his take on what Georgia is capable of doing to limit Joe Burrow.  He’s bullish about that — and before you dismiss him, he reminds the viewer at the beginning of the clip that Smart dialed up some coverages that Tua had problems with in last year’s SECCG.  Kirby and Lanning may be challenged, but they won’t coach scared.

Anyway, as I watched the video in its entirety, I got to a conclusion I can’t shake.  This game is going to come down to what Georgia’s four-man front can do with LSU’s offensive line.  If the Dawgs can control the line of scrimmage with four, get pressure (with this defense, that doesn’t necessarily mean sacks), keep Burrow contained in the pocket and prevent Edwards-Helaire from having an unchallenged day on the ground, that will enable Smart and Lanning to mix all kind of looks behind them.  That should help greatly limit LSU’s mid-field passing game.

I may even be underestimating what Georgia will be able to do with pressure.  Keep in mind that sacks allowed aren’t something LSU avoids.  The Tigers are next to last in that stat in conference play.

I’m not saying this is a lock for Georgia.  Far from it.  I’m saying that I don’t see a path to victory if Kirby can’t get his defense to play well with a four-man front, because without that, I don’t see how LSU stays under thirty points.

In other words, it’s the trenches and in the SEC, that still means more.

Nice legacy you got there.

How ’bout these apples?

Since 2000, no team has made more appearances in the SEC Championship Game than Georgia, which is making its third consecutive trip to Atlanta and eighth total since the turn of the century.

That has the makings of a pretty good trivia question.

I made my preseason picks bed and now I have to lie in it.

As always, schools are listed in the same order as they were in my preseason post, with this season’s won-loss totals.

[Ed. note:  Please read that last sentence again, carefully, before you blast me in the comments for not agreeing with the order of presentation.  You’ll save us both a lot of time.  Thanks!]

There you have it.  How do you think I did?

College athletes, Gene Smith is here for you.

“We need to come up with a method to allow our student-athletes to take advantage of their name, image and likeness, make sure it’s something we can regulate, and make sure it’s something that’s not tied to athletic ability,” he said. “We don’t want to turn this into a pay-to-play model or a situation where they’re compensated for their athletic ability. We’re trying to find a way to keep it tethered to the educational process.

“It’s a complex issue, and we feel good about the direction we’re headed in. But the reality is we’ve got to work with the federal government to come up with a national law,” he said.

Though name, image and likeness attention tends to be focused on the fraction of top athletes who are destined for the pros, Smith said Olympic sport athletes stand to benefit significantly because many of them are on partial scholarships that cover between 15 and 30 percent of their college costs.

“Many of them leave with debt … so they’ll take advantage of this opportunity to hopefully reduce the debt they incur getting their education,” he said.

So… kids, feel free to bring in those dollars, as long as they find their way back to the schools in some form or fashion.  I figure Gene is just months away from putting together a company store proposal so kids will have an official NCAA-approved resource where they can take their hard-earned bucks — at a profit, of course.

At least at Ohio State, they’d be able to get their tats on campus.  Progress, of a sort.

“Georgia has won. But it has not provided much entertainment.”

Will Leitch has written 5,000 words — five thousand!  I can go days without writing five thousand words — about Georgia’s 2019 season.  While I could criticize some of it as a mite unfair, particularly trying to compare the ebb and flow of this season with that of that wonderful 2017 one, I’ve got to admit this bit resonates with me:

What this has set up is a high-stakes gamble, one in which a fanbase—one that is not necessarily known for its cold, rational behavior—is asked to be happy with winning, and winning only. In which much of what we think of when we think of cheering for a sports team (exciting play, inspirational individual story, an underdog “we can do this, guys!” aesthetic) is shelved for an implicit understanding that the people in charge have no one and nothing to answer to other than the scoreboard. You have seen it in the reaction to the crowd’s boos at the Kentucky game, the idea that fans somehow were booing the players rather than the millionaire coaches, something the staff surely knew wasn’t true but promoted anyway. You have seen it in the stubbornness and resistance to acknowledge basic truths that might be inconvenient, like when Smart continued to deny that he changed defenses with a lead late against Auburn even though the formation switch was obvious to everyone watching. You have seen it in the insistence that the offense is fine, that Jake Fromm is fine, that critics are mere haters, or gripers who just don’t understand what football really is.

The bet is that if they win, they do not need to be cheerful or inspirational.

Or fan friendly… but I digress.

Don’t take this too far.  I certainly haven’t.  But years and years of close, but no seegar eventually got Mark Richt unceremoniously canned.  Kirby’s a better organized, ‘crootin-machine coach than Richt was, but when his raison d’être being sold to a fanbase expected to shell out its devotion and money in ever-increasing levels is winning is all the entertainment we need and should expect and he can’t quite make it to the summit, where do you go from there?

I don’t say that to be critical of Smart — I’m happy as hell with what he’s done these last three seasons — but only to ask the same question Leitch is getting at:  how soulless do we want Georgia football to be?  (No, I’m not going to ask the question that question begs, because the answer to that one is more depressing than I want to contemplate this morning.)

Talk about a hot take with a backstory…

While I don’t think Mike Bobo walks on water, a guy who managed to coach a Mason-led offense to the seventh-best yards per play average in the country (not to mention first in that regard in 2012) would appear to have more than a clue.  I’m guessing he and Kirby are capable of kissing and making up over any little in-season spat they might have.

What I’m more curious about is how Kirby convinces him that Greg McGarity has turned over a new leaf.  ‘Cause I doubt McGarity himself is capable of that.

UPDATE:  DavetheDawg reminded me of this 2012 piece about Bobo and Smart.

Boy, this is some stat.

You know, a team with an inside running game could make a living exploiting that.  Just sayin’.

Okay, folks — without looking it up, what’s the common thread between the main subject of yesterday’s MPC and this?