In the CFP battle of best versus deserving, the latter is about to notch a win.

A Power 5 AD in New York this week said a specific 8-team playoff model is circulating around the CFB world that would incorporate bowls, including a bowl-sponsored national championship game.

The money chase is (always) on.  It’s just a question of when, not if.

Aside from watering down the postseason, this is going to make life more meaningless for the P5 schools who have no shot of making the playoff field.

This year is a perfect example of how unnecessary a larger field is most seasons.  But I’m sure there are plenty of you who will see this as the greatest thing since sliced bread.  I know Mickey will.

That dismissal fueled Kiffin’s desire to return to the SEC and a burning passion to exact revenge on Saban, multiple people with knowledge of the matter told The Athletic. Now that he’s the head coach at Ole Miss, he sees the chance to do so.

Damn, I’ve missed that side of Junior.  (As a blogger, that is.)  Welcome back, sport.

“I’m excited to bring Mike on board.”

This is probably not the hot take South Carolina fans want to hear from their new offensive coordinator’s former boss at Georgia ($$).

“There’s no doubt things will be different and hopefully better,” Richt said of South Carolina’s decision to hire Bobo. “That’s why you’re going through this change. I’m not going to say it could have the same effect as the hire at LSU, but let’s face it: (The Tigers) made a coaching change and things changed dramatically.”

Boom has never had an OC who’s been able to make lemonade out of the lemons Muschamp’s provided.  If Bobo can do that, he’ll have done well, Brady or no Brady.

With impeachment upon us, I have a question to ask those of you who are right of center.  It’s a serious, non-snarky, question.

Quite simply, why do you think Republican members of Congress are willing to jump off the cliff, logically speaking, in defense of the POTUS?  There are a number of defenses that have been raised that are flat-out contradicted by the evidence.  Or even more clownish arguments, like this one.

"In modern history, we've never gone after impeaching a president in the first term" — Kevin McCarthy argues that there's a precedent against impeaching presidents before their second term 😂 pic.twitter.com/lPJMJGlIQy

I’m not questioning defending Trump from being impeached.  He’s the head of the party and we’re in tribal times.  I get all that.

What I don’t get is why risk your dignity with all the nonsense.  Wouldn’t it be easier and less deserving of mockery to say, yes, what he did with Ukraine was wrong, but it doesn’t amount to an impeachable offense?

I know part of the reason for the sideshow is in hopes of muddying the waters so the public will be confused, but the polling shows that hasn’t happened.  So why continue to go down this road if you’re a member of Congress who wants to be taken at least somewhat seriously?

Again, I’m not trolling, so I would appreciate it if you would respect that in your comments.  I’m genuinely curious about this.

What do you get when you combine schools with more money coming in than they know what to do with, athletic directors who are routinely depantsed by the likes of Jimmy Sexton and impatient fan bases ready to move on to a new coach when they don’t get the immediate gratification they believe they’re entitled to from the current guy?

Why, you get a shitload of dead money on the books, paying dudes who no longer work for you…  Pardon?  What is this “accountability” you speak of?

Rashomon in red and black: autopsy of an incompletion

I thought this, which I found via the Dawgs247 message board, might make for an interesting discussion about what ails Georgia’s passing game:

Fromm with another horror show against LSU. Below 50% completion rate again (2 big drops obviously) and plays like this kinda show why. Yes, presnap we like the corner/sail/wtv vs. man but you gotta be able to get off it and go through progressions if it's not there. Wasted play pic.twitter.com/ZA9DDmHX3q

Here are the four individual shots: 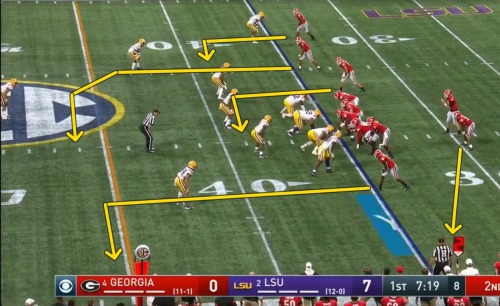 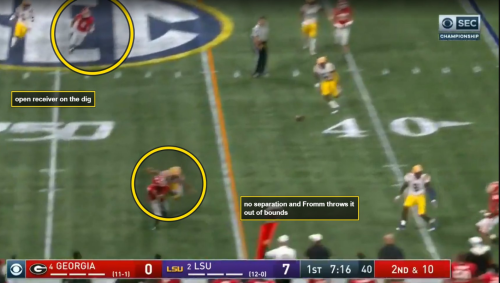 His point that Fromm should have gone through his progressions is a valid one, but there’s a lot more going on there than that.

First of all, the play design is simplistic.  All the receivers are running one-on-one matchups with defenders; there’s nothing in the design itself that would help open up a receiver in the pattern.

You know what’s not a problem on that play?  The pass protection.  Watch it run:

There’s a four-man rush, and it’s picked up, giving Fromm a nice pocket to throw from.  More importantly, he had time to reset and find Blaylock on the dig route over the middle.  (If he felt rushed, he also had Herrien open in the flat early.)

And that’s one of the little differences from the game.  Burrow trusted everything — himself, his protection, his receivers and the playcalling.  Fromm didn’t look like he trusted anything on that play.

Before you go there, that’s not a manball problem, but, clearly, there’s a lot to fix there.  What do y’all think?

They ought to put that header quote on Mark Emmert’s tombstone.

But here’s the main point:

The problem with this performative ritual is not that it unfairly maligns Emmert, who has done plenty to deserve the scorn, but that it confuses both the problem of college sports and the breadth of its culpability. Frankly, it misses an essential component of Emmert’s job and the NCAA’s function: to take the heat, so others don’t have to.

He’s there, making $2 million plus a year, to be the useful idiot the schools need him to be and he does his job well.

Fun while it lasted, right?

A full quarter of you didn’t make it to the final vote.  Given the ignominious end to Georgia’s regular season, I can’t say I’m surprised.  But I ain’t mad — the reason I killed the MP the first time around is because we limped into the final ballot of the season with less than two dozen voters standing.

We had a total of 188 who did show up for this and, on average, they had five teams on their ballot.

Here’s the breakdown by conference:

How we spent our time on this:

No surprise there.  No surprise, either, that the participation rate from Georgia residents was the lowest of the season, at 59%.

And here’s our prediction on the national champs:

A couple of final points worth mentioning:

Here’s the complete list of all 65 ballots for the final Coaches Poll.  It doesn’t take a genius to see numerous examples of bias and conflicts of interest throughout.  And I’ll bet any amount of money you want that it took them (more accurately, their SIDs and them) a lot more time than 10 minutes to fill out.  The Coaches Poll isn’t credible and hasn’t been for a while, which is why I started the Mumme Poll in the first place.  At this point, it’s an anachronism, but if they want to keep playing at it, they really ought to take a hard look at approval voting.

Finally, I want to give a big shout out to Peyton, my partner in crime in running the poll this season.  He’s the wonk and there’s no way I could have done this as well as it played out without his kind assistance.  Gracias, man.