Now, one year doth not a trend make, but I find that interesting, nonetheless — especially in light of Smart’s decision to release Zachary Evans from his LOI.

This is the kind of decision making process you can engage in when you have a huge staff of analysts you can rely on for a deep dive on a recruiting class.  It also helps to be doing so from a position of strength with regard to roster depth and quality of existing commitments/signees, which gives you more room to pick and choose players unearthed by your staff who may not get the same love from the recruiting services.

Again, who knows if this will be the story going forward, but I am curious to see how many of these three-star kids wind up panning out for Smart over the next few seasons.

For those of you who got your knickers in a twist over Bill Connelly having the temerity to suggest that Georgia Tech’s returning production might mean some improvement in the program, you can relax a little.  Bill has the Jackets sitting at 58th in his first SP+ rankings of 2020.  The only two SEC teams worse than Tech are Arkansas and Vanderbilt.

What about Georgia, you ask?  Well, it ain’t bad.

Yeah, the offense isn’t projected as elite, but it’s hard to argue differently until we see what Monken produces.  But that defensive SP+ number is off the charts — Oregon is second, with a defensive SP+ rating nearly double Georgia’s, at 11.8.

Just to give you an idea how crazy that number is, the Dawgs finished last season tops in defensive SP+, at 10.  Maybe there’s something to Bill’s returning production metric after all.

Caught between the proverbial rock and hard place

I hate to break it to those of you who think the NCAA is playing and winning a game of three-dimensional chess as it attempts to put off the consequences of rising discontent with its amateurism protocol, but the reality is it’s growing more likely that it’s going to turn out to be a matter of reaping what it’s sown.

Plaintiffs in Alston case argue to 9th Circuit that NCAA Board of Governors' recent decision to tell membership to make new rules allowing athletes to make money off name, image and likeness undermines NCAA's legal argument of need for limits on pay not related to education

This is a real challenge for the NCAA to navigate. As states push to create NIL laws and the NCAA considers rules changes, the NCAA risks undermining its own legal arguments. https://t.co/0J6FmMLBIf 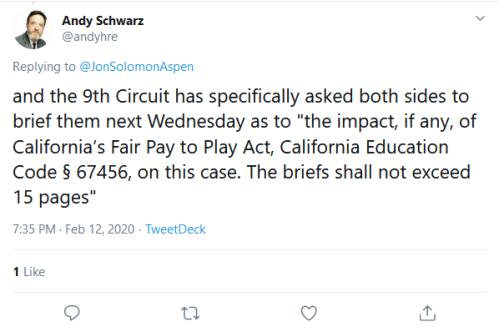 This is what happens when (1) you change the definition of what you’re defending on the fly to suit your needs and (2) you have zero interest in being proactive about a festering problem.

The courts, state legislatures and Congress are all dropping strong hints that the NCAA’s position is untenable.  It’s hard to see how creating study groups is going to blunt that charge.  But I guess that’s why some of you believe they pay Mark Emmert the big bucks.

Filed under Political Wankery, See You In Court, The NCAA

In the wake of a 5-7 head coach getting a mammoth contract to induce him to change jobs, tell me Pat Forde is wrong when he writes this:

College revenue sports have never been as stupid as they are right now—as riddled with hypocrisy and inconsistency, as rife with fiscal irresponsibility, as drunk on revenue, as lacking in strong leadership. Men’s basketball is a diminished product that elite players view as a necessary evil, while administrators remain in denial about the underground economy that ran the sport for decades. Football is an increasing caste system that rewards outrageous and irresponsible spending as the Power 5 conferences stratify into the Power 2 Plus Clemson.

Mind you, stupid isn’t the same thing as wrong.  The jokers running athletic departments may be dumbasses, but it’s their money to spend.  Just don’t try to pretend things make any more sense than that.

The NCAA is here to help.

The NCAA will vote in April to change the legislation regarding the limit of 25 “initial counters.” New rule would make it 50 total players over two years and no more than 30 in a single year.

I’m sure they’re going to pitch this as a boon for programs like Kansas that are still reeling from roster mismanagement from prior regimes, but an extra five schollies in one year isn’t going to fix that.  What this really enables is for coaches with loaded rosters to pick and choose in years when there’s a particularly rich crop of recruits to take in a few extra studs.

Saban’s already got a couple of analysts on the mother as you read this.

“I think it’s his job until he doesn’t want it anymore.”

To the commenter from the other day who thought Seth Emerson was hinting Greg McGarity might be close to being on his last legs as athletic director… nah.

There are varying opinions about the job Georgia’s Greg McGarity is doing and has done as he wraps up his 10th year as the school’s athletic director. But there only two opinions that matter where his performance is concerned: That of UGA President Jere Morehead and that of the Georgia Athletic Association’s board of directors.

McGarity would seem to have the firm backing of both. McGarity was lauded by various student-athletes and members of the board during Wednesday’s winter meeting at the Georgia Center of Continuing Education, after which the president was asked about McGarity directly.

“Well, from my perspective I think Greg and his team are doing an outstanding job,” said Morehead, who also serves as chairman of the athletic board. “We’ll certainly sit down and talk in the next several weeks. But I continue to have great confidence in our athletic director. As does our SEC commissioner, who reminds me that Mitch Barnhart and Greg are the senior statesmen among the SEC athletic directors. So I appreciate all the great work he does for us.”

This isn’t that hard as long as you focus on the only metric by which McGarity is judged by his superiors.  As Emerson ($$) puts it,

There isn’t much urgency right now because things in the athletic department are chugging along, and McGarity has delegated a lot of responsibilities over the last few years. Football is going well and basically runs itself. Kirby Smart and his operations director, Josh Lee, handle nonconference scheduling. Senior deputy AD Josh Brooks is overseeing the $80-million expansion of the Butts-Mehre building, and has overseen the improvements of the gameday experience at Sanford Stadium. Fundraising is also going well. McGarity gave credit to his team, including associate AD Matt Borman. But one of the best fundraisers remains Smart, who since he arrived has been adept at convincing donors why he needs their help. And he’s gotten it — McGarity said $47.5 million has been raised for the $80 million expansion project.

As long as the athletic department is comfortably profitable and there are no embarrassing personal gaffes along the lines of misplaced red panties, there is zero interest in making a change in management.  So if any of you honestly believe that fan disgruntlement with anything from how programs other than football are doing or the quality of the gameday experience is going to make a difference to anyone breathing in Butts-Mehre, all I can tell you is that you’re wasting your time.

Football is a well-oiled machine that continues to separate the fan base from the contents of its wallet and that means Greg McGarity has a job until he wants to walk away.