“… a time when Georgia Tech was considered cool in Atlanta…”

About this, Andy Staples ($$) says, “To the uninitiated, it can seem like schtick.”

Geoff Collins popped up on the screen, drinking from a Waffle House cup and wearing a hat with Atlanta’s 404 area code printed in the iconic yellow blocks from the Waffle House sign. The Georgia Tech coach didn’t need the custom Welcome To Atlanta background that appears behind him on his Zoom calls to tell anyone where he lives. Since taking the job in December 2018, Collins has tried to make the Yellow Jackets and Atlanta synonymous.

He has done this for two reasons. First, branding is in Collins’ blood. Whether it was drawing Cans of Swag for recruits during his stint as Mississippi State’s defensive coordinator or dubbing third down the “Money Down” — with managers bounding up and down on the sidelines holding dollar signs — at his last three stops, Collins has always naturally tried to differentiate himself.

Staples says the reason Collins has been so relentless about branding is that he’s trying “to get everyone to stop associating Georgia Tech with the option.”

You know what?  Weirdly enough, I get that. 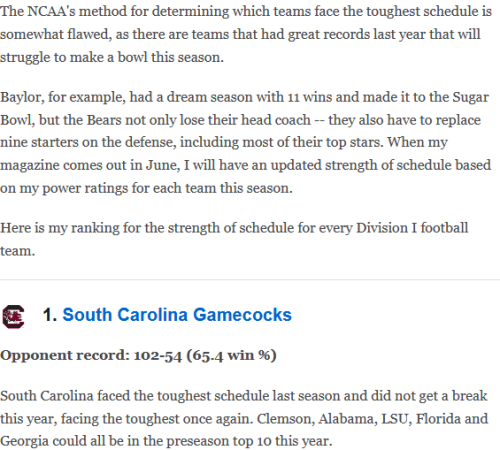 It’s all downhill from there, Boom.

“It was a managerial error.”

Just when you thought they couldn’t be any bigger assholes than they are, the NCAA spent more than $400 million it had in savings — money that sure would have come in handy about now — because it was concerned “… about rising unrest among college athletes over amateurism rules.”

“With that in mind, the association built up nearly $500 million in reserves from 2004 to 2014. The NCAA also purchased insurance that would cover roughly one-third of the tournament’s annual revenue. With the insurance and the reserves, these employees said, NCAA leaders thought they could absorb the hit of a lost tournament with only minimal cuts to expenses.

“But in 2015, as the NCAA and the wealthier football conferences felt rising pressure from antitrust lawsuits filed by thousands of current and former athletes, Notre Dame Athletic Director Jack Swarbrick was among some college sports power brokers who argued the cash reserves were enticing lawyers to sue, former NCAA employees said.

Of course, Swarbrick now denies he said that.  In fact, nobody wants to take credit.

“They thought it was bait. … My thought all along is that’s bulls—,” the former employee said. “Any organization that makes more than $1 billion every year is always going to be a target for lawsuits. … Another half a billion in reserves isn’t going to make a difference.”

“Remy declined to answer whether he or NCAA lawyers agreed with Swarbrick’s theory.

“I agree it was a narrative that was out there,” Remy said. “The decision to draw down on the reserves was made for a variety of reasons.”

If there’s any justice, somebody will get sued for that.

Herbie susses where it all went wrong last year.

Herbstreit called Georgia’s offensive struggles in 2019 a “collective effort,” pointing out that Fromm didn’t have the same level supporting cast around him.

“They didn’t necessarily have the receiver play they had the past two years when he was a freshman and sophomore, they weren’t able to get the ball downfield in this offense, and I think eventually it caught up with them,” Herbstreit said.

“They’re going in a different direction, which I think maybe will help them moving forward.”

Amazing what this guy gets paid to provide the same kind of analysis you can find in the comments section of this blog on a weekly basis.  Give yourselves a raise, peeps!

So, Nick Saban does this interview where he discusses his new S&C coaches and a lot of folks took it as a slap at Scott Cochran because of Alabama’s distressing run of injuries last season.  Nick doesn’t need me to step in on his behalf, but I don’t see where he’s dissing Cochran at all.  In fact, it sounds like he credits Cochran with trying to get out ahead of the problem here:

“Four or five years ago, these guys were at IMG when actually some of our fourth- and fifth-year players were at IMG and heard a lot about some of the state-of-the-art sports science stuff that they were actually into and doing there, just when you’d visit in recruiting or whatever,” Saban told Gold. “I never really thought much about it, and then when we had this opportunity come up, we researched these guys and they’d done a phenomenal job at Notre Dame of eliminating injuries by something like 50 percent and even better at Indiana.

“So, when they came in and we interviewed them, there was no question that from a sports science standpoint and from a conditioning standpoint they were light-years in advance of what a lot of people have done in their programs for a long, long time, which we’ve done the same thing for a long, long time, too. And we’d actually brought some NFL people at the end of the season because we wondering if there was something that we could do to improve performance and injury prevention because we seemed like we’d gotten a lot of guys hurt this past season.

“So, we were already going down this path…

All I hear in that is Saban pumping up his new guys for going where he was already going.  He thinks he made a good hire to replace the guy who was also going where he wanted to go.  That’s it.

“They said that, on the surface, we look like a good partner to investigate.”

The Pac-12 is trying to convince the world, or at least the part of the world that spends money on broadcast rights, that it’s hot, hot, hot.  You want proof, skeptics?  Look who’s taking Larry Scott’s phone calls!

But when the Pac-12 Conference negotiates its next media rights deal to start in the fall of 2024, conference executives expect the deep-pocketed digital companies to make serious bids.

“This is what they’re telling us,” Pac-12 Networks President Mark Shuken said. “Several of them have come to us and said that they want to be in this space.”

The most intriguing conversations have come with Apple, which so far has not settled on a financial model around sports rights. Apple executives have told conference and school officials that they see live sports as a programming genre that can set its direct-to-consumer business apart from its rivals.

Apple also was attracted by the conference’s physical location. The Pac-12 is based in San Francisco; Apple is in nearby Cupertino, Calif.

Wow — both companies are in Northern California.  Sounds like the beginning of a beautifully lucrative relationship, don’t it?

A bit of context here:

The Pac-12, per the Pac-12, is chatting with Apple; nothing more. Sides could only get serious/talk terms after the close of ESPN/Fox's exclusive negotiating window with the conference – and that window doesn't even open for 2+ years https://t.co/W4WhENieWN

In other words, Larry Scott is still a genius, at least in the minds of the idiots who hired him.  Gotta respect the grift, though.

Your Daily Gator interrupts a conversation.

SDS has a roundtable about which of Saban’s former assistants will be the first to notch a win over their old boss and Neil Blackmon, Florida columnist, just can’t help interjecting with an irrelevant point because, well, Gators gonna Gator.

With Dan Mullen pushing Florida back to national relevance, Smart is going to have a dogfight in the East year and year out…

When you’re an orange and blue hammer, everything looks like a nail.