She’s from the government and she’s here to help: 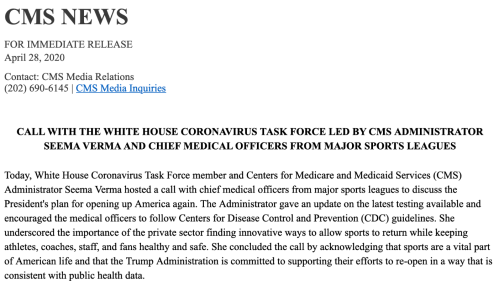 “I just feel like there’s some momentum,” Carter said Tuesday during an interview on the Oxford Exxon Podcast. “Will we be playing football Labor Day weekend? I can’t say that yet but that’s our hope and that’s what we’re going to continue to push for.”

“That would give us a great opportunity to get ready for September and have a somewhat normal fall,” Carter said.

You may notice he says nothing there (or in the rest of the piece) about students returning to campus at that time.  Then again, that’s not his problem.  This is:

Carter said Ole Miss is going to have to tighten its belt from a budgetary standpoint, noting the athletics department is fine through June 30. After that, especially in a scenario where there’s no football season or a delayed football season, difficult decisions would have to be made.

What’s the day after June 30?  Oh, that’s right.  Ah, well, sacrifices will just have to be made.

“I don’t know that it would mean a 5-day or 10-day or 14-day quarantine, but certainly we would be very diligent in making sure we’re doing the right thing bringing these groups back,” Carter said, adding coaches would need 6-8 weeks to get athletes ready for competition.

At least they’ll be well-intentioned about quarantining the kids so the checks will keep rolling in.  That’s nice.

By the way, Carter says his SEC peers have been talking about this several times a week.  Seth Emerson asked Greg McGarity about that ($$) and got this in response:

“A July 1 return would be wonderful, and we believe there will other options presented as well regarding return to play,” McGarity said. “We just have to follow the guidelines established by the medical professionals, as well as State of Georgia and University System directives.”

Somehow, I doubt that’s all Greg will be following as crunch time gets closer.

If you’re looking for a timetable from somebody who doesn’t have a vested interest in keeping ESPN’s checkbook open, here’s what California’s governor had to say yesterday.

CA is flattening the curve, but the reality is #COVID19 is not going away soon.

Our re-opening must be gradual, guided by public health and science, and will be done in the following STAGES: 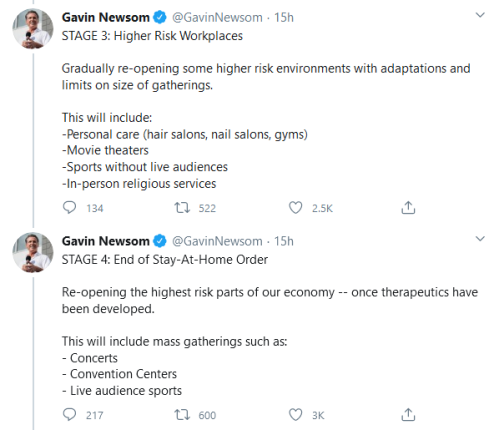 I don’t offer that to say who’s right or wrong here, but merely to point out it’s very likely there are going to be competing timetables in play.  That may or may not matter for the regular season, especially if that’s reduced to conference play only, but it sure as hell will for the postseason, a most lucrative time for college football’s athletic directors.  Will things get contentious?  Probably.