What a difference five years makes.

How many programs could survive this kind of talent drain out of a single signing class?

Of the 12 most highly rated players Georgia signed in that class, five have transferred out. Justin Fields is at Ohio State after one year at UGA. Cade Mays is at Tennessee after two years at Georgia and a ton of playing time. Brenton Cox left after one year and sat last season at Florida. Luke Ford was in Athens for a year but transferred back home to play for Illinois and Otis Reese spent two seasons with the program before transferring to Ole Miss.

How many teams can lose a trio of five-star prospects from one class and still have the majority of the five-prospects still in the fold from that same class? It can’t be common but that’s the case for Georgia as running back Zamir White, offensive lineman Jamaree Salyer, cornerback Tyson Campbell, and outside linebacker Adam Anderson remain.

… UGA had 24 players report to campus from the 2018 class. Five of those players left via transfer, 11 (White, Salyer, Campbell, Anderson, Walker, Cook, Hill, Ojulari, Wyatt, Davis, and Camarda) are starters or big-time contributors, and you have three more (Tindall, Jackson, and Wilson) who are on the cusp of being integral pieces.

That is friggin’ ridiculous.  It’s also another reason why having a top-three recruiting class isn’t just about bragging rights.  The implosion of Georgia’s 2013 class was certainly a contributing factor in Mark Richt’s downfall.  For Kirby Smart, the 2018 losses are more of a bump in the road than anything else.

Lindy’s joins the (growing) crowd picking Florida ahead of Georgia in the preseason, but you’ve got to love the conclusion.

Our Call: Dare we say Florida rising, LSU having won it all, and Alabama bouncing back, there is a bit of pressure on Smart this season? Anything less than a division title will not suffice.  [Emphasis added.]

Yeah, if only Georgia had won any of those lately… oh, wait.

Two paragraphs and a chart from Andy Staples’ Florida preview ($$): 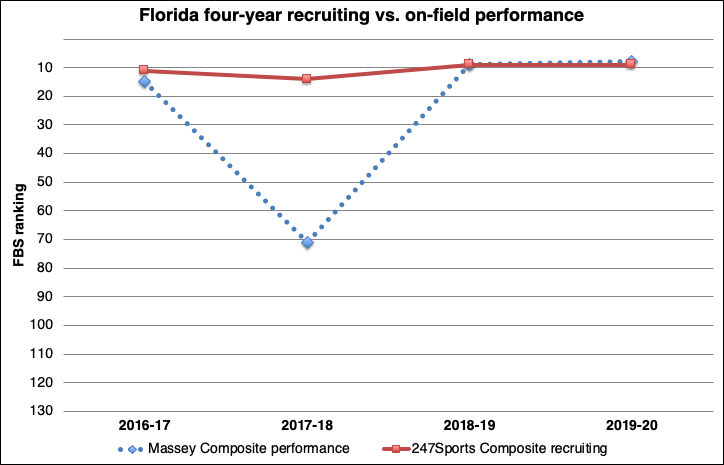 Mullen and his staff are known as excellent developers of talent, but the question remains whether they can develop their way past programs that have simply signed more raw talent (Alabama and Auburn, though not annual opponents, also have ranked higher on average than Florida during that period.)

All Mullen’s managed to do is get his players to perform to their level of talent, which is lower than their main divisional rival’s.  On the other hand, spring practice, something, something…

Everything comes back to football.

Especially in these here parts ($$):

As South Carolina state representative J. Todd Rutherford addressed a crowd of protesters in front of the State House on Friday, he knew a lot of eyes were on him.

It was more than the 500-plus on the grounds in front of him. The mere presence of 150 or so of that group was going to mean his message traveled far beyond the area he could see. That’s because the Gamecocks football team, including head coach Will Muschamp, participated in a peaceful two-and-a-half-hour march and protest that culminated with Rutherford’s speech on the State House steps.

“I think that it adds eyes on the crowd,” Rutherford told The Athletic. “The fact it has swelled that much that you have an entire team, with the coach coming out and saying, ‘Enough is enough,’ that means the world. What people are going to say is, ‘Where’s Clemson? Where’s Presbyterian? Where’s Furman?’… ”

“What people are going to say is, ‘Where’s Clemson?”  Why, ‘Cock fans, of course, will.  It’s all they’ve got for the moment.

Eh, what has he done for us lately?

Here’s a story that says much about college football media and the way it goes about reshaping the focus of the game from its traditional regional scope to a national one, for better or worse.

The morning after Scott Cochran was hired by Kirby Smart, I appeared on Peter Burns and Chris Doering’s nationally syndicated radio show “SEC This Morning.” We talked about the hiring and what it meant, and if as a Georgia fan I had any concern about Kirby hiring Cochran for his first on-field position. There are plenty of people who would love to do a radio hit with Peter and Chris that do this for a living, and it was very kind of them to have me on.

Towards the end of the interview, Peter asked me a question that caught me off-guard. I don’t have the exact quote recorded, but his question was something along these lines… “Considering the fact that Kirby Smart seems to have all of the pieces in place that a college football coach needs to win, from the facilities to the star recruits and budget to hire whoever he wants for his coaching staff, are Georgia fans starting to get frustrated with the lack of a national title? Is his seat going to start warmIng if Georgia doesn’t win a national title next season?”

I only wish he’d had the presence of mind to shoot back with “Warming?  Whom would you suggest as a replacement?”

This is kind of a “what have the Romans done for us lately” list, but somebody needs to explain to me what we’re supposed to be bitching about when it comes to the resume Smart has already crafted:

If there is supposed frustration over Kirby’s failure to get over the final hump, it’s only because he’s built the framework to get the program as close as it’s already gotten and, along the way, accomplished the kind of stuff that very few of his predecessors could similarly claim.

The highlighted portions of that list should be a daily cause for celebration for Dawgnation.  That we’re expected to brush those aside as insignificant because Smart enters his fifth season without a national championship ring on his hand is almost insulting.  But not surprising these days.

There are many things I don’t understand about what happened to Georgia’s offense last season, but the most puzzling thing to me was the seeming abandonment of what had been its bread and butter play for so many years, play action.  You would think that an offensive scheme that emphasized the running game and had a talent in the backfield like Swift would be tailor made for PA, but, instead, Coley settled for a lot of zone read option stuff that grew increasingly ineffective as the season wore on.

Enter Todd Monken.  Skip the Air Raid nonsense and ask instead if emphasizing 11 personnel groupings means Georgia’s offense will continue to ignore play action.  I don’t know, but I will say there’s no reason you can’t run play action successfully out of 11 groups.  For proof of that, you don’t have to look any further back than last season.

Highest yards per attempt on play action passes in 2019:

If you’ve got a good running back whom defenses perceive as a threat, you can sell play action.  I’d like to think that’s something Monken already knows.

I don’t know if you heard about or read the accusations leveled against the Iowa football program that emerged this past weekend.  The most telling part of the story isn’t the accusations themselves.  It’s what head coach Kirk Ferentz said in response to being asked about them.

“I don’t want to say I was blind-sided,” Ferentz said during a Sunday call with media, “… but the bottom line is we don’t want anybody to leave this place not feeling like this was a good experience.”

… Most coaches know the line between demanding and demeaning. Ferentz has called for a “cultural shift” in the program. Asked what that culture was before the past week, he said, “you could argue, in my mind, it’s been healthy.”

Ferentz added: “[But] in the last 48 hours, I learned of things that needed more attention. However you want to break it down, I’m the one who is responsible.”

… Asked whether he feared for his job, Ferentz said, “That’s really not my frame of work. But I did ask multiple players if they feel like I’m part of the problem or if they feel like we can’t move forward with me here, I’d appreciate that feedback. That’s not what I’ve heard thus far.”

I don’t doubt that Ferentz was being sincere when he said those things yesterday.  But here’s a guy who’s been in the business of coaching young men seemingly forever — Ferentz is 65 and has been Iowa’s head coach for more than two decades — who claims he wasn’t ready for the outbreak of emotion and frustration that has enveloped his program.

Coaches, especially ones who have coached as long as Ferentz has, are notorious control freaks.  How does something like this go unnoticed and unchecked as long as it has without the head coaching knowing about it, without the ignorance being at least somewhat wilful?  Beats me.

Gosh, just think what he could have been this season with a spring practice under his belt.

Those that can, coach.