UGA moving all classes after Thanksgiving break to online. But otherwise keeping the calendar the same. Classes start in person on Aug. 20. pic.twitter.com/UXrkGhHcMQ

Second thought:  along those lines, I’m trying to understand the logic of thinking “it’s not safe for students to come back to campus after a week at home” and also thinking “… unless they’re football players”.

Filed under Academics? Academics., Georgia Football, The Body Is A Temple

My favorite thing I learned writing this @philsteele042 story? At one point, Phil got down to 6-point type. When people started asking him to include a magnifying glass with each magazine, he decreed that he would use nothing smaller than 8-point type. https://t.co/jHVURwD1TI pic.twitter.com/ApEGPni86J

There’s a reason Steele’s category here is named what it is.

“But just because something is difficult doesn’t mean it shouldn’t be tried.”

There’s a good piece from Seth Emerson this morning ($$) about why and how the powers that be can put together a 2020 college football season.

He’s less cynical than I am about the financial motivation to play, but I do think that there is a non-financial element involved.  Hell, I want college football as much as the next fan does.

Anyway, the key part of his piece is something you amateur epidemiologists can ignore, since you do all your research on Facebook, but for the rest of us, it’s a good outline of the parameters the sport faces:

Dr. Christina Proctor is a clinical assistant professor in UGA’s College of Public Health, specializing in health promotion and behavior. She also happens to be an avid runner and understands the desire to pull off playing any season, as hard as it may be.

“Can it (a football season) be done with no risk? No. There is always going to be a risk as long as COVID-19 is circulating, and of course, that risk increases with contact sports,” Proctor wrote in an e-mail. “Your lowest risk activity would be individual drills or conditioning. Team-based practices increase risk. There’s even more risk with scrimmages, and then highest risk would be playing teams from a different geographical area.”

That’s the hard part. But then Proctor adds:

“I will say as an athlete myself and someone who loves sports, I know that athletes have a short timetable and missing a season or year could jeopardize their future, so I empathize with the situation. There are procedures we can put in place to lower risk.”

Practicing in small groups. Virtual team meetings. Fewer or no visitors to practices and no non-essential visitors to practice facilities. No athletes with any symptoms should be showing up to practices or games, and regular testing is a must. Players with pre-existing conditions, such as severe asthma, diabetes or auto-immune disorders should be kept away from what Proctor called “high-risk activities.”

How do you socially distance while playing football? Well, you don’t. But that’s not as much of an issue if you have the resources to test regularly, such as on game days and at least once during the week, according to Dr. Travis Glenn, a professor who specializes in environmental health science.

Dr. Glenn goes on to state the obvious — the less resources a program has, the harder it will be to meet that standard.  Did I mention that two of Georgia’s first four games are against ETSU and UL Monroe?

Bottom line here, college football starts with two structural problems.  One, unlike professional leagues, authority isn’t concentrated in a central office, but rather, it’s diffused in the conferences.  That lack of conformity means a program like Georgia’s, presumably doing everything it can to minimize risk, is still going to run into issues when it faces off against a team that can’t or won’t do so.

The second problem is self-inflicted.  When your position is that college athletes are students first and athletes second, you can’t really isolate them the way the professional leagues are planning to do with their players.  And if you can’t isolate these kids on college campuses, keeping them away from Proctor’s “high-risk activities” is going to be nigh on impossible.

In other words, even at schools operating with the best of intentions, the odds are there is going to be a week during the regular season when COVID-19 rears its ugly head, and does so in significant numbers.  What happens then is going to be the real challenge between bad and worse.

Elliott’s take: “Can the Gators score against Georgia? …”

Here’s something for Todd Monken to work on.

Against conference teams, the Dawgs finished 71st.  Against FBS teams, that 2019 ranking drops to 73rd. 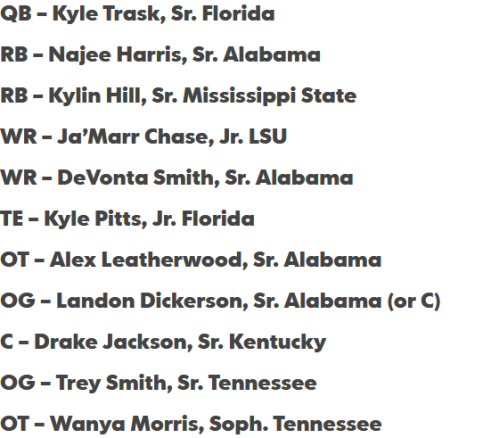 And a few observations:

“I’m hearing there are many more cases we don’t know about. That’s to be expected, but I think this is more widespread and a larger volume of cases than people realize in college football,” Rutledge said. “I’m getting a sense of concern from players that wasn’t there just a couple weeks ago. There’s actually some players who are trying to figure out how they could write a letter to the NCAA expressing their concerns. But here’s the problem— they want to remain anonymous because they’re concerned that all of the sudden maybe a university would say, ‘Hey, if you’re that worried about this, just quarantine and don’t play.’

“It’s a double-edged sword that while they’re worried about their health, they still really want to play football and want to be given a fair chance to compete. This will continue to be very complicated and I think you’ll see a lot more schools have to enforce quarantine. And still, all of the (athletic directors) and coaches I’ve spoken to are planning on starting college football on time.”

In terms of Tuscaloosa, a year without Alabama football would be financially catastrophic for the Druid City. According to Mayor Walt Maddox, a season with no football would lead to a $2 billion loss in revenue.

“It would be economically catastrophic for Tuscaloosa if there is no football season,” Maddox said to CBS 42. “Even a mitigated football season with restricted attendance and number of ball games would have dire economic consequences.

Alabama football accounts for a significant amount of the states economic income, for it has pulled in a roughly estimated $175.5 million according to statistics released from the university back at the conclusion of the 2015-16 season.

Despite the potentially devastating numbers there is still hope to be had that the season takes place in some form this season.

Leave the fucking bottle on the bar (because I agree with Finebaum).

“I think college football is even more difficult than the NFL,” Finebaum said. “There’s nowhere to go to be in a bubble. You have programs all over the country with different economic situations and testing protocols. I think even if we get to a season, you will see teams that will not play or will not play a full season. It’s going to be a jig-saw puzzle of epic proportions.”

Filed under College Football, It's Just Bidness, The Body Is A Temple

Doubts, they have them.

Eight Sports247 pundits get together to predict the 2020 CFP field.

None of them project Georgia in one of the top four spots.

I’m sorry, but there’s a special place in my heart for Tommy Tuberville mockery, and this certainly qualifies. 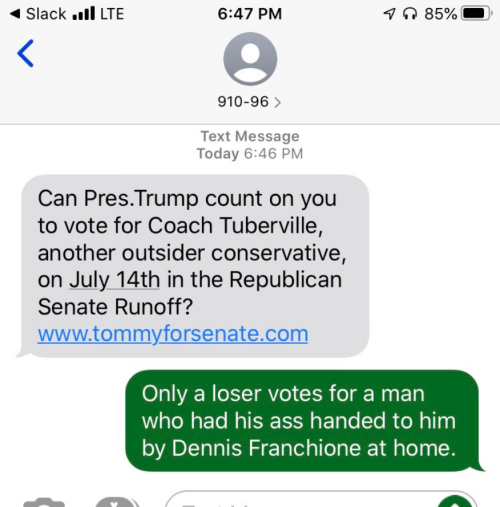 I guess he can’t count on one vote.