This COVID shit’s getting real.

The Ivy League news wasn’t that big.  This, though, is.

That is going to have a significant ripple effect across college football.  Assuming they don’t come back in a couple of weeks to shut the whole thing down, that is.

SEC coaches met this morning. Person involved in the call tells @247Sports they had no idea Big Ten decision was coming and that message from SEC admin this morning is SEC will wait as long as they can before making ANY decisions on football season.

Big 12's Bob Bowlsby said he was on a conference call this morning with new Big Ten Commissioner Kevin Warren, who gave no indication of conference-only schedule move. Bowlsby: "I believe it's early to make that sort of a decision but perhaps they have a different perspective."

… it’s every conference for itself.

“All signs are … things are not improving, let’s put it that way.”

McGarity believes a final decision — to play or not to play — must be made by Aug. 1. “That’s three weeks from now,” he said. “What can change between now and then? Are we going to get a vaccine in the next three weeks? I don’t know. But things are trending in the wrong direction.”

He doesn’t know if there will be a vaccine in the next three weeks?  Hunh?

Not as bad as they think. 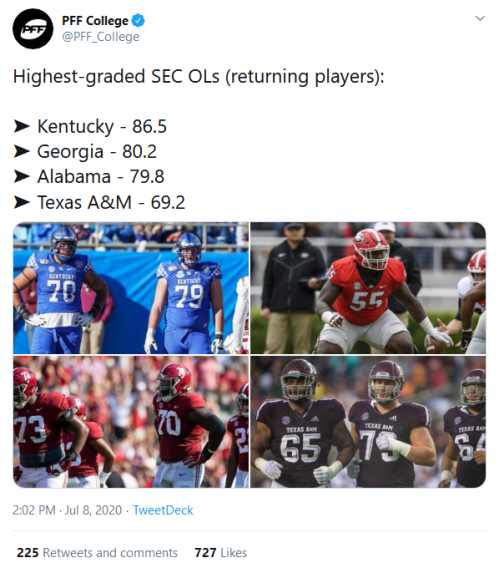 Speaking of the Gators, it occurs to me that Stoops may be engineering the same kind of season Mullen was good at assembling every few years at MSU — accumulating and developing lesser talent that stayed for four years and turned into a competitive squad because it was so experienced.  Kentucky will have good lines on both sides of the ball, which is a damned fine place to start.  There is some talent on the roster, although depth won’t match that of the big boys.

I’m not predicting the ‘Cats are on their way to the SECCG this season, but they’re gonna be a tough out.

UPDATE:  On a related note, this ain’t too shabby, either. 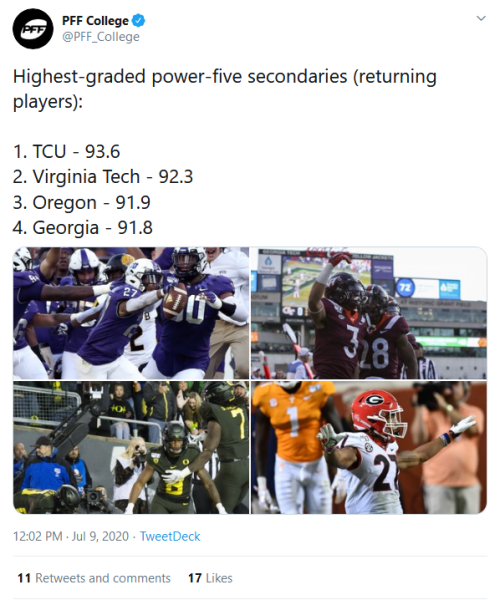 Speaking of irony, how about this?

The Georgia Bulldogs have been firmly in the mix throughout the race, and Mims’ potential positional coach has helped to keep them there.

“I talk to Coach [Matt] Luke more than I talk to Coach [Kirby] Smart. We talk about football and get to know each other, too,” Mims said. “He’s a great coach, and he cares about his players. He gives everyone an opportunity.”

Who’da thunk Georgia would go from Tunsil being a recruiting sore spot to a recruiting sales pitch?  (With Luke being the pitch man, to boot.)  What a country!

Back in late May I did a radio interview and was asked about my confidence level on whether or not we would have a 2020 college football season.

I said, in effect, that we would definitely play college football this Fall but we just didn’t know what it would look like. The only variable was whether or not there would be fans in the seats. Based on the folks I had talked to at the time, I was extremely confident that the 2020 season would start on time and play its entire schedule.

On June 26 in this space I wrote that I was starting to get a little nervous over the number positive tests among players who had returned to campus. But I still thought we were going to play.

Today, for the first time, I’m genuinely concerned that we’re not going to be able to play college football in 2020.

But when you talk to college officials you can hear the frustration in their voices. They’ve been working daily since mid-March, participating in countless ZOOM calls, trying to put together a workable plan that would allow the games to be played safely. With enough work and enough planning, it could be a win-win for the players and the fans.

Their hope and belief was that as the summer moved along the numbers would get better and there would be positive momentum to play, even if there were no fans in the seats.

I’m not mocking here.  When all you’ve got for a plan is hope and belief in the face of a pandemic, you ain’t got much.  And that’s still all they’ve got.

**–We’re running out of time. A decision of some kind is coming late July or early August. The decision to go or not go with the season needs to be made a minimum of four weeks out from the first game. I expect the commissioners who run the Power 5 will wait as long as possible in order to get the best data possible.

**–If a conference like the SEC decides that the season will not start on time, it could cancel the season or leave it open ended to see if a window of opportunity appears.

Worth noting: There are five Saturdays in October and four in November if the SEC wanted to play a reduced schedule.

Your Daily Gator is trolled.

There goes a damn good Dawg, my friends.

Matt Melton has been exploring a new metric.

So what is first half point differential (1HPD)? Unlike advanced stats, it is easy to define and calculate. It is simply the scoring margin (positive or negative) in the first half of a game. In the 2019 College Football National Championship Game, LSU led Clemson 28-17 at the half. The 1HPD for LSU was +11 and -11 for Clemson. Simple stuff. With more than ample time on my hands, I calculated the 1HPD for all FBS teams in conference play back to the first season of the College Football Playoff (2014). That is six seasons worth of data. What did that data show? I thought you would never ask.

For starters, 1HPD in conference play is positively correlated to a team’s conference record. In fact, with an R squared value of .72, the correlation is stronger than YPP in conference play (which surprised me). So if 1HPD has a strong correlation with conference success, what happened to those teams that saw their expected record based on 1HPD differ significantly from their actual record? Wow, its like your reading my mind.

What happened is pretty interesting.

The average team improved by 1.41 wins in conference play and nearly 70% of the teams improved by at least one win.

On the other hand, the teams that exceeded their expected record more often than not declined the following season. 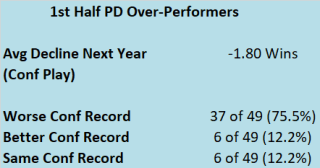 The average team won about 1.80 fewer games the next season and more than three quarters of the teams declined by at least one win.

His latest post runs that through the P5 conferences.  Here’s what he comes up with for the SEC:

Finally, here are the SEC standings.

And the SEC 1HPD.

I know its fun to hate on Alabama, but don’t go throwing dirt on the Tide just yet. Alabama was nipping at the heels of LSU in 1HPD and if we look at the other seven conference games both teams played, Alabama actually had a better differential (+137 to +113). Of course, that classic in Tuscaloosa does count and lets also give LSU credit for never trailing at the half in any conference game (they were tied against Florida and Auburn). In the East, Georgia finished with a healthy 1HPD margin over Florida and Kentucky and despite the relatively disappointing season, the Bulldogs led by double-digits six times in SEC play (tied with Alabama and LSU for the most double-digit leads).

(By the way, is anyone surprised that Georgia was third in the conference, behind the two offensive powerhouses?)

The question is whether you see a team there that’s destined for a little regression to the mean.  Matt sure does.

… Since all the Power Five conferences are grouped together here, I am only going to list those that significantly over or under-performed (a difference of at least .200). We’ll start with the overachievers.

… Tennessee has been one of the hardest teams for me to get a read on this offseason. Were the Volunteers good in 2019? They closed the year on a six-game winning streak, beating three bowl teams in the process (Indiana, Kentucky, and UAB). Their YPP numbers were solid (fifth overall and third in the East). On the other hand, their APR numbers were much less glowing (ninth overall and fourth in the East). They also lost to Georgia State and were pounded by the three best teams on their schedule (Alabama, Florida, and Georgia beat them by a combined 82 points). And since when are Tennessee fans delighted by victories against Indiana, Kentucky, and UAB? Their 1HPD also shows them to be pretty weak. Despite winning five of their eight league games, they were outscored in the first half in conference play and actually trailed at the half five times, including four times by double-digits. The Vols do have the benefit of drawing Arkansas in their rotating cross-division game in 2020, but Alabama, Florida, and Georgia are still on the schedule as well as a non-conference trip to Oklahoma. 8-4 seems like the ceiling for this team with a real possibility of 6-6 or worse.

Anybody who wants to answer his “since when are Tennessee fans delighted by victories against Indiana, Kentucky, and UAB?” question can step right up in the comments to do so.

Aside from that, what do you think of his correlation?

Where did the mojo go?

Believe it or not, there were times when Georgia’s offense looked explosive last season.

(I forgot how good a throw Jake made to Pickens in that TAMU game.  But I digress.)

I linked to this before, but here’s Josh’s post from April explaining the metrics measuring explosiveness.

We all think we know pretty well what happened to the offense beginning with the South Carolina game, but I look at that chart and wonder why things went south after Georgia’s most successful effort of the season against Tennessee.

Before you sneer at that observation, you might want to consider that one thing Pruitt’s defense did very well — better than Georgia did, as a matter of fact — is prevent the big play.  The Vols were 3rd nationally in preventing plays of 20+ yards and first in preventing plays of 30+ yards last season.  Despite that, Georgia managed to be both explosive and efficient in that game.

Sure, Muschamp saw something and exploited it successfully.  Give him credit for that.  What I can’t figure out is why Coley and his offense never managed to adjust after the South Carolina loss.

The hits just keep on coming.

Here’s a good summary of who’s in and who’s out on the offensive side of the ball, from Anthony Dasher.  A few highlights:

Y’all have anything to add?