And here they go… 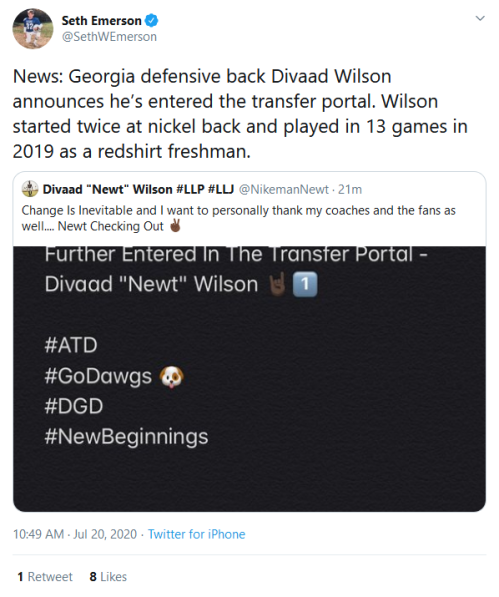 Might not have been the first name I would have thought of, but there’s no question the defensive backfield is a crowded place at Georgia.

UPDATE:  If you’re looking for a current scholarship head count, here you go.

“The boat’s not as big, but all boats sink if you don’t have football.”

Per The Athletic ($$), about 46% of Georgia’s fiscal 2019 athletic department revenue came from football, one of seventeen sports.  That percentage isn’t out of line with typical P5 finances.  But that’s not the entire picture.

While Iowa proudly offers 24 sports, most supporters give money based on the football program’s success. Football and non-specific revenue account for 87.9 percent of Iowa’s earnings ($133.7 million). Likewise, Georgia, which has 17 sports, reported $154.3 million in department revenue and $149.3 million (96.8 percent) either directly or indirectly from football.

You’d have to think that without football, those donations are going to slow.

“We acknowledge we do need more testing.”

Marc Weiszer raises a good point in this story.  With the wait to get results for a COVID-19 test in Georgia nowadays running as much or more than two weeks, how can the football program meet the proposed P5 testing protocols?

Against that backdrop, the Georgia football team is preparing for a possible season where increased testing and timely results will be needed.

UGA has declined to provide answers about the frequency with which it is testing athletes and the turnaround time to get results. Athletic director Greg McGarity has deferred to longtime director of sports medicine Ron Courson for details including if players will be tested weekly once full contact practices begin, but Courson has not been made available to speak about COVID-19 related matters to the media since the pandemic began.

Yeah, that’s what I thought.

And if you simply allow the program to access testing resources on a satisfactory level to meet those protocols, while not doing anything to improve the general state of affairs, that raises a PR problem.

Ray, who spoke to UGA’s Courson about the issues regarding COVID-19 during the course of conference calls as part of the NCAA advisory panel, said he thinks there is a sensitivity within athletic departments about their place in communities that surround them.

“I don’t think they want to be accused,” he said, “of taking the right to healthcare away from anyone because they want to have sports.”

Are the natives getting restless?

I’m not sure it’s worth giving somebody who hosts a college football podcast (although he is a former ASU quarterback) too much credence on this subject, but I thought I’d pass it along on the odd chance that it’s an early canary in the coal mine kind of development.

Former Arizona State quarterback Rudy Carpenter recently revealed there’s growing unrest among a few dozen players in the Pac-12 about the upcoming college football season and that level of worry has now made it to the league office in an effort to increase health insurance past graduation and ensure enhanced player safety this fall during a global pandemic.

Carpenter, who hosts a college football podcast and frequently appears on sports radio, wrote Friday in a string of tweets about a player group from the University of California that initiated these demands, that have since garnered support from other Pac-12 teams.

“Pac 12 football players have created a list of “demands” 4 the Pac-12/Universities 2 take into consideration, if the demands aren’t addressed/complied w/ the players R threatening to sit out the season..There is significant support growing among ALL 12 teams with 50 or More players on many of teams in support of this action/demands list,” Carpenter tweeted. “The initial idea was 2 create a players union, they decided time didn’t allow 4 this & figure the best way to create the change they want is 2 “boycott” the season.

“Things they r asking 4 is 50/50 rev share, 6 yrs insurance upon graduation, better Covid-19 testing & protocols etc etc…The player led group is being spearheaded at Cal Football & they have been holding phone calls with other Pac12 teams..There is some kinda of players only meeting/vote that will be taking place shortly.”

The 50/50 revenue split is a pipe dream, of course, but the health stuff is a touchier subject, you would think.  (Again, assuming this is all true.)  I’ll be curious to see if there are any credible developments on this.  I sure would love to hear Larry Scott’s take on somebody threatening his business model.

Athlon’s “Best SEC Quarterback Matchups of 2020” piece is yet another indication of how mediocre this year’s crop is.  I mean, how big is the drop off from Burrow vs. Tua to Newman vs. Trask, anyway?

Will no one think of the locker rooms?

The next time an AD tells you it’ll be non-revenue sport athletes that’ll suffer if, Gawd forbid, college football players should start earning something off their name, point ’em to this.

After I got it, I spent the first hour doing what I do every year: figuring out his take on the Dawgs.

His 2020 Preview isn’t too high on Georgia’s prospects.  He does favor UGA to win the SEC East, but his preseason Top 40 has Georgia sixth, behind two SEC teams, Alabama (natch) and Texas A&M (!).  His Power Poll has Georgia seventh, behind those two SEC teams and LSU.

There are several reasons I gleaned for that.

His national unit rankings are revealing.

In conference unit rankings, Georgia is in a six-way tie for first at quarterback, which, if you think about it, is a great way to show how mediocre the conference picture is at that position.  Georgia is also first at defensive line and linebacker.  Its lowest ranking, sixth, is at special teams.

If there’s one puzzling thing, it’s how little mention he makes of the change at offensive coordinator.  He cites Monken’s resume, but that’s it.

It’s not a bad picture overall, but considering that Georgia was third in his 2019 Power Poll, it does come off as something of a let down.

Rivals has put together a six-part series on name, image and likeness rights for college athletes.  If you’re interested, here are the links:

There’s a lot there.  If you think NIL is inevitable for college athletes, then this particular observation should sink in, if you’re a football coach:

Imaginations can run wild and comprehending the complexities of Name, Image and Likeness, especially without NCAA legislation, can be staggering.

But Blake Lawrence of Opendorse offers an excellent analogy.

The former four-star linebacker who played at Nebraska and now runs the leading platform for athlete marketing from Lincoln compares NIL to any other part of an athletic program. That is what college coaches will have to wrap their minds around: Neglecting NIL will be like having poor facilities or outdated equipment.

Back in my college days, I was heavily into buying British import records (thanks, JEM Records!) because I didn’t want to wait to get American releases of acts and artists I followed.  That’s how I got my hands on Elvis Costello’s My Aim Is True.  I did the same thing for his follow up, This Year’s Model.

I liked Aim, and figured much the same for Model, so I wasn’t prepared for the shock I got when I dropped the needle on this bad boy.

“No Action” came roaring out of the gate and the album never let up.  It’s one of the greatest opening songs on a rock record.  What are some others you can think of?