The Big Ten reportedly goes there.

The Big Ten has voted to cancel the 2020 college football season in a historic move that stems from concerns related to the ongoing coronavirus pandemic, multiple people with knowledge of the decision confirmed to the Free Press.

The sources requested anonymity because they were not authorized to speak publicly on the decision. A formal announcement is expected to Tuesday, the sources said.

The presidents voted, 12-2, Sunday to end the fall sports in the conference. Michigan and Michigan State — which both has physicians as presidents — voted to end the season, sources said. Only Nebraska and Iowa voted to play, Dan Patrick said on his radio show Monday.

The question now is who follows.

Filed under Look For The Union Label

From one Senator to another

I can’t say I’m a fan of yours, but I’ve never perceived you to be one of the crazier members of Congress.  So I hope you’ll take this suggestion in the spirit it’s offered.

Right now, the folks who are pushing to cancel college football are the schools.  They are choosing to do so because they fear the only way to save the season is to acknowledge what most people in this country already know, namely, that college athletes aren’t regular students pursuing sports as part of the academic experience, big time programs are making serious money exploiting their efforts and the schools are more worried about the threat of empowering them than salvaging a football season.

As long as the NCAA and its member institutions believe there is a chance they’ll be able to continue to cling to their amateurism protocols, they have no incentive to recognize that and make changes.  That’s why we’re on the verge of losing college football in 2020.

If you want to do your part to save that, the first thing you can do is pull your bill regulating college athletes’ NIL rights and tell the NCAA and schools they can’t look for any Congressional action to preserve their business model.  More than any tweet you could post, that would force them to do “an honest cost-benefit analysis”.

Your consideration is greatly appreciated.

UPDATE:  Another Senator writes a letter.

Filed under College Football, It's All Just Made Up And Flagellant, Political Wankery

Before they take it all away…

… live the dream with Josh Kendall’s won-loss projections for the SEC with the revised 10-game schedule ($$).

He’s got the Dawgs going 9-1, losing only to Alabama, and winning the East by virtue of the straight-up head to head win over the Gators. (Yay!)

Perhaps the biggest surprise is he’s got Arkansas picking off Ole Miss to avoid going winless.  Boy, that would be a glum Junior at the post-game presser if that happened.

David Ubben and Seth Emerson ($$) look at the talent gap between Georgia and Tennessee here.  Warning:  it ain’t pretty, if you’re a Vol fan. 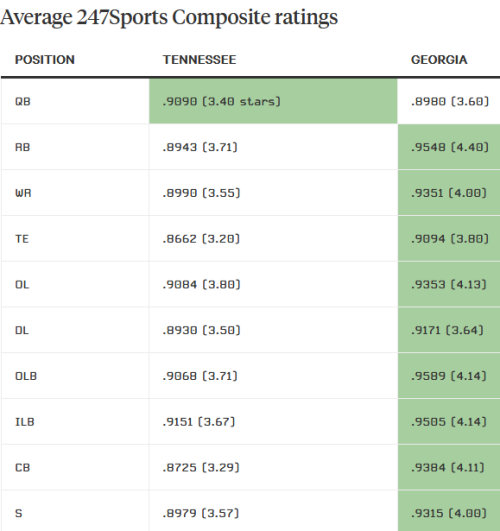 The secret to Kirby’s success, per Seth?

The reason for that is because Smart is so single-minded and focused on recruiting that if they do have a bad year in recruiting, that position coach is going to hear about it. He may be fired. He may be the one guy on staff who doesn’t get a pay raise. There is constant pressure on these coaches to recruit well at every position.

If nothing else, that should tell you how much Smart realized he had to upgrade the OC position after last season.  Coley’s not in College Station because he had a problem recruiting.

Filed under Because Nothing Sucks Like A Big Orange, Georgia Football, Recruiting

You’re not the boss of me. 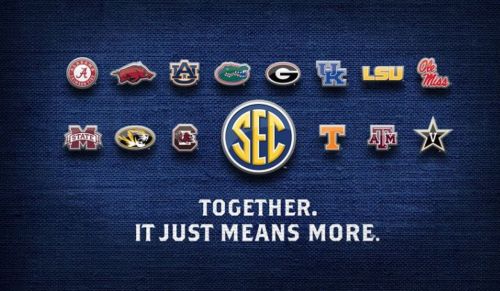 I joked about this last night, but maybe I shouldn’t have.

With the college football season seemingly hanging in the balance, the Southeastern Conference is holding firm.

A sense of panic broke across college football Sunday night amid reports of multiple Power 5 conferences moving closer to canceling their fall seasons. Sports Illustrated reported the Big Ten had already been gauging interest in whether other Power 5 conferences were on board for a uniform decision to be announced later this week. Don’t include the SEC in that group, at least not yet.

The SEC isn’t moving toward canceling its fall football season, according to conversations with sources throughout the conference in the aftermath of reports the Big Ten was on the verge of doing so. The conference, which unveiled its 10-game schedule on Friday, prefers to take a wait-and-see approach.

The SEC purposefully pushed back its fall camp start to Aug. 17 and season opener to Sept. 26 to monitor how the other sports, including the NBA and MLB, were handling playing games amid the COVID-19 pandemic. That hasn’t changed. SEC commissioner Greg Sankey has done a good job of encouraging the league’s 14 presidents and chancellors to hold the line and be patient, according to sources.

Not said there, but also included in Sankey’s calculations is how other conferences scheduled to begin play before the SEC fare.  The question he faces now is how that math works if some or all of his P5 peers bail on him.

But there is undoubtedly a sense of concern throughout the conference on the possible domino effect if multiple Power 5 conferences move to cancel the fall football season. The Big Ten didn’t pull the trigger on that decision Sunday, though Yahoo Sports reported the conference remained “on the cusp of cancelling the season.” The expectation throughout college sports is if the Big Ten jumps first, the Pac-12 won’t be too far behind in joining. Big 12 commissioner Bob Bowlsby told the Dallas Morning News no decision had been made though there is a sense around the SEC that the Big 12 is more closely aligned to the Big Ten and Pac-12 than the SEC and ACC. Bowlsby admitted “the last two or three weeks have not been good to us.”

If only the Big Ten moves to spring, there’s no reason why the SEC couldn’t continue on its plan. It gets considerably trickier if the Pac-12 and/or Big 12 join in with the Big Ten. Could the SEC move ahead with just the ACC and possibly some Group of 5 conferences? Sure, though, it becomes a harder and harder sell if the SEC’s peer conferences drop out. There was no confidence around the SEC Sunday night that it’d be willing to be on an island and play fall college football by itself if the other four Power 5 conferences moved to the spring.

I suspect every conference commissioner wakes up in the morning with the first thought crossing his mind being “why the hell didn’t those politicians listen to what we were saying in the spring?”

Sure sucks when hope as an action plan flops.

I posted these tweets this morning.

I’m sure a few conference commissioners and school administrators got stiffies when they first heard about prominent players like Lawrence and Fields expressing a strong desire to play ball in 2020.

The fine print is a bitch, though.

“The beautiful thing is now we’re all on the same page,” said Stanford defensive lineman Dylan Boles, one of the players who organized Sunday’s message. “We made history tonight.”

Boles said he received a direct message on Twitter at 5:30 p.m. PT Sunday from Clemson running back Darien Rencher. The two had never talked before, but Rencher wanted to discuss the Pac-12 players’ unity movement with which Boles was involved. Boles is one of the leaders of a group of roughly 400 players in the Pac-12 who published a list of demands early last week and said they planned to sit out of practice and potentially games if conference officials were unwilling to meet with them and address their concerns. Players from the Big Ten and other conferences made similar demands thereafter, and others showed their support with the hashtag #WeAreUnited on social media throughout the week.

Rencher was one of dozens of college football players — a list that included his Heisman Trophy-candidate teammate, quarterback Trevor Lawrence — who shared the hashtag #WeWantToPlay this weekend as college football administrators met to debate the merits of a 2020 season. Rencher and others felt that fans and commenters were unfairly pitting the #WeWantToPlay contingent against the #WeAreUnited group, Boles said. Rencher, Boles and Lawrence talked briefly on a FaceTime call before deciding to loop in more players from around the country.

“We got down to talking and agreed that both of our goals are aligned with each other,” Boles said. “We all want to play this year. We just want to make sure players have a say in this thing.”

Larry Scott strenuously objects.  And I bet that will be a subject for the next commissioners’ meeting, too.

Filed under College Football, Look For The Union Label

‘Take it. Ride her until she bucks.’

Are we about to enter an era when a college quarterback’s social media earnings will be followed as closely as QPR?

While college football tries to fight its way through the COVID-19 pandemic, the implementation of NIL has quietly progressed behind the scenes. By this time next year, it is almost assured the likes of Rattler will be leading a new wave of millionaires.

Only a portion of it will have to do with their on-field accomplishments.

That’s where Rattler’s self-awareness comes in. Before throwing that eighth career pass, he has already built up a social media following that would earn him more than $740,000 this year, according to an estimate by Opendorse, a technology-based social media firm from Lincoln, Nebraska.

“I don’t think, I know he is savvy about that value,” Zupke said. “That’s something he created. … I would tell these guys, ‘Take it. Ride her until she bucks.’ What a great opportunity.”

Rattler already developed his own apparel line in high school (NappyHeadz). He was the subject of a Netflix documentary, “QB1.” He is a YouTube regular. Rattler was the Elite 11 MVP in 2018. SportsLine has him among the top five Heisman Trophy candidates before starting a game.

The $740,000 estimate on Rattler would place him third nationally among college football players in social media earnings. That is, when the NCAA allows it. It won’t until next year. Still, you should get used to this new culture.

“Spencer Rattler gets it, and he hasn’t even played a down yet,” said Opendorse CEO Blake Lawrence, exaggerating just a little. “He just gets it.”

It should be no surprise Rattler was the least experienced of 18 top college players whose potential social media earnings were calculated for CBS Sports by Opendorse.

But, sure, let’s worry about Joe’s Tire Mart throwing a few thousand some kid’s way to entice him to play for dear old Whattsamatta U.

TFW college football is on drugs 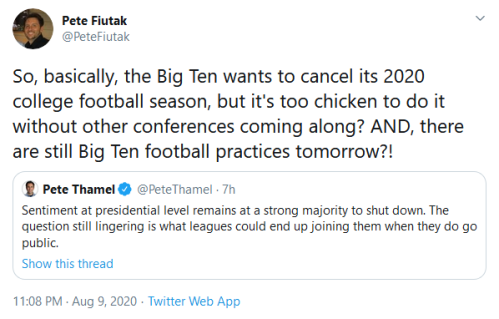 If that isn’t your quintessential moment for college football, 2020 edition, I don’t know what is.