This time it’s for real, apparently.

BREAKING: The Big Ten presidents have voted to postpone the 2020 college football season with hopes of playing in the spring, per sources.

BREAKING: The PAC-12 presidents have voted to postpone the 2020 college football season, per sources. I'm told the medical experts didn't sound very encouraging on prospects of being able to play in spring either.. @brett_mcmurphy first reported the news.

Sacrifice, in the name of football

Come to watch Clay Travis get dunked on.  Stay for this absolutely perfect assessment of how the college football pooch got screwed because when it comes to major issues, nobody likes making hard choices.

Ben Sasse wrote to the Big Ten Conference arguing in favor of holding the season by saying that “life is about trade-offs.” And that’s true.

But to get football the trade-offs needed to be made on our end. We needed to be wearing masks. We needed to sacrifice the economy in the short-term to crush the curve. We needed a government that took the virus seriously instead of listening to sports talk phonies who saw an opportunity to get famous by telling people what they wanted to hear.

Or alternatively we needed to have made a trade off where we treat these athletes like the minor-league professionals they are, allowed them to collectively bargain, and so were able to put them in a bubble away from the other students. Instead of pretending that the star quarterback at Florida State is a “student-athlete” in the exact same way the captain of FSU’s fencing team is.

That’s it. Those are the options and the trade offs that were, once upon a time, available to us. Everything else is forcing a kid whose grandma has already contracted COVID to put himself, his family, and his community at risk for no pay so that we can have fun on Saturdays and pretend that America is doing just fine.

We’re in the midst of a generational public health crisis.  It didn’t sneak up on us.  We’ve had months to face it.  We’ve had obvious decisions to make if we wanted a college football season.  Instead, it seems like all many of us have come up with is to blame the Chinese and/or the media and tell the players you only live once.

Pandemic life these days isn’t about trade-offs.  It’s about false choices we convince ourselves aren’t false.  And we’ll deserve what we get as a result.

#SCOTUS will not block lower-court ruling that allows colleges to pay student-athletes for internships & other expenses related to education. Justice Elena Kagan denied emergency request from NCAA w/out referring to full court.

You’ve now gotten the highest court in the land on record as not supporting your take on college athlete compensation.  Nice. 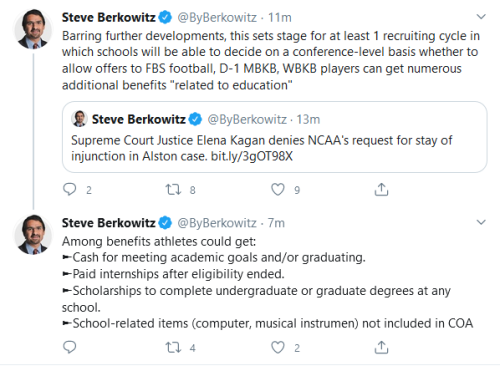 Those of you who have been screaming about what NIL compensation would do to competitive balance better hang on to your hats.

Check out the big brain on Danny.

I keep seeing liability as the big issue in college football. What if the players who want to play sign a waiver and free the schools from those liabilities?

Other than that, swell idea. https://t.co/Omxmfi3glW

Is there any college football pundit easier to dunk on than Danny Kanell?

So it might just be an impossible haul, and it brings me no joy to say that. I love college football, even with all its moral failings. College football Saturdays in a town like Athens, where I live, can be absolutely joyous. (Particularly with a lot of bourbon.) But the failings of college football go beyond just the coronavirus and this country’s hapless attempts to handle it. This sport has deep, corrosive structural issues, and it’s possible that even if Trump had contained this virus in the early stages, college football would still be having trouble getting on the field this year without a vaccine. But the same stubbornness that binds people to Trump — and against basic science — is the same stubbornness that led college football fans to pretend this year could go on whether they wore a mask to the grocery store or not. Many of the same people who desperately want college football on their televisions this fall are the same people who have been downplaying this virus for months and whose behavior has led to the surge that’s now keeping their favorite game off the field.

Or who say the players can’t be trusted to make wise decisions with their NIL rights, but should absolutely be trusted when they say they want to play.

A meaningful seat at the table

I’ve seen questions from some of you in the comments about the likelihood of a college players’ union.  As this article ($$) indicates, there are a lot of legal hurdles that would have to be overcome in order for that to become a reality.

A players’ association might be a different matter, though.  More on that in a sec.

The irony is that it’s becoming more and more clear that it’s in college athletics’ interest to have a negotiating partner.  As Andy Staples ($$) put it,

There is no mechanism to negotiate with the players who — whether schools want to admit it or not — make up most of the workforce in this multibillion-dollar endeavor.

Why could pro leagues — those with bubbles and those without — restart? Because they negotiated the terms of those restarts with their respective players’ associations. The players wouldn’t have come back without a mutually-agreed-upon plan.

The problem is, the idea of a players’ union is scarier to the NCAA and schools than a one-year business loss due to a sport shutdown is.  Would a players’ association, such as what #WeWantToPlay is advocating, be less threatening?  Maybe.

… it is possible for players to form a non-profit organization designed to look out for their interests. And though the people in charge of the schools, conferences and the NCAA wouldn’t be legally required to bargain with that group, it probably would be in their best interests to allow the players a greater voice in the governance of the sport. All the leagues have student-athlete advisory committees, but those athletes get little to no say in any important decisions.

It would be voluntary, so the schools would have some say over how things could be shaped.  But in the end, it still comes down to relinquishing a degree of control to college athletes, either just in the revenue producing sports, or overall.  I don’t sense that things are presently dire enough for the schools to make that leap, but ask me again in six months.  The way things are going, a lot could happen between now and then.

Filed under College Football, Look For The Union Label

All of this was sparked by the Big Ten’s impending move to cancel its season. More than 24 hours after first reports published from ESPN, Yahoo Sports and SI of the Big Ten’s potential plans, the conference still hasn’t made an announcement and is now gripped in an internal strife that poured out into public Monday. From high-ranking politicians to the league’s own coaches, a variety of personas strongly voiced their support for a 2020 season, some of them specifically targeting the Big Ten and commissioner Kevin Warren.

“Kevin encountered a lot more blowback today than he thought he would,” says an industry source.

Administrators and high-ranking athletic department leaders spoke to Sports Illustrated about Monday’s events and Tuesday’s potential decisions. An industry insider summed up the situation thusly: “We’ve mastered the art of being entertaining, if nothing else. My God, what a mess.”

Maybe they should sell tickets to watch that.

Scott Frost has some thoughts.

Nebraska’s head coach delivered quite a message yesterday, saying his team wants to play so much, the program will consider scheduling games even if the Big Ten shuts down football in 2020.  He was just getting on a roll with that, though. 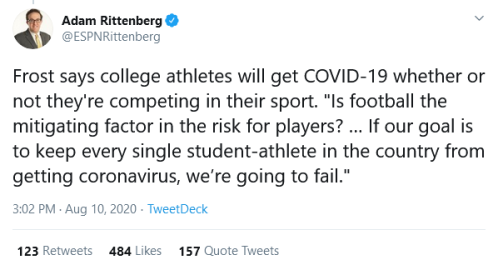 That, of course, isn’t the goal, but… wait, there’s more?  Yeppers.

Scott Frost says #Nebraska estimates $80-120 million hit if there's no football season. "The biggest factor is if we don't play football, we're not going to be able to pay for anything here until we start making money again."

Priorities, bitchez.  Mike Gundy got publicly flailed for saying something similar in the spring, but now, nobody even blinks at saying the quiet part out loud.

Filed under Big Ten Football, It's Just Bidness, The Body Is A Temple

“The decision does not have to be made now.”

“We also test anybody that has symptoms and have an open testing site where they can go and get tested as many times as they want or anytime they feel like they need to,” Saban said. “But our guys aren’t going to catch [the virus] on the football field. They’re going to catch it on campus. The argument then should probably be, ‘We shouldn’t be having school.’ That’s the argument. Why is it, ‘We shouldn’t be playing football?’ Why has that become the argument?”

Because that’s the box the NCAA and amateurism has left football in, Nick.

Presumably the conferences have been watching the professional leagues play and noticed the track record of the NBA and NHL, which have their players operating in safe bubbles, compared to MLB, which doesn’t.  But there’s no way the schools can adopt that approach without admitting the obvious about college athletes.

So, instead, we’ll get more dithering, lauded by the likes of Tony Barnhart for what passes as “leadership” in college sports.

This from SEC Commissioner @GregSankey. The scientists kept telling him the same thing. Use all the time you have to make decisions. The SEC is not scheduled to play football until Sept. 26. The Big Ten starts Sept. 3. Big difference.

The decision does not have to be made now. https://t.co/4gBsLdvuIu

Prudence is nice, but what exactly is Greg Sankey going to discover in the next month that’s a game changer?  If there’s one thing we’ve all learned over the past four months, it’s that nothing has changed, except for the emergence of players’ voices.  And that’s the very thing that’s got the conferences more upset than dealing with the pandemic.

Dan Wolken has said a lot of stupid stuff about the pandemic, but on this, he’s accurate.

Bringing athletes to the table, negotiating out the details a semi-bubble, safety standards and, yes, financial incentives could have been done months ago. Instead, you had SEC officials telling players some of them were going to get COVID and tough luck.

Don’t really see that changing in the next six weeks, but, hey, if there’s one thing we’ve had a huge supply of this year, it’s hope.

That’s why they pay him the big bucks, folks.

Ask Mark Emmert about player compensation, about NIL rights or about any other pocketbook issue and he’ll solemnly intone that college athletics must have a uniform approach or its world as we know it will end, but ask him about a real existential crisis affecting the same and here’s what you get:

When asked who makes the call on the college football season and fall sports, Mark Emmert said last week: “It’s actually going to have to be each institution,” Emmert said.

The man is a fucking joke.