Didn’t see this one coming.

SOURCES: #UGA QB Jamie Newman is expected to opt out of the 2020 college football season, per me & @SethWEmerson.

Have heard that Jamie Newman had been looking really impressive during camp. Sources say he’d been mulling over this decision during the past 48 hours.

All out of bubbles to give 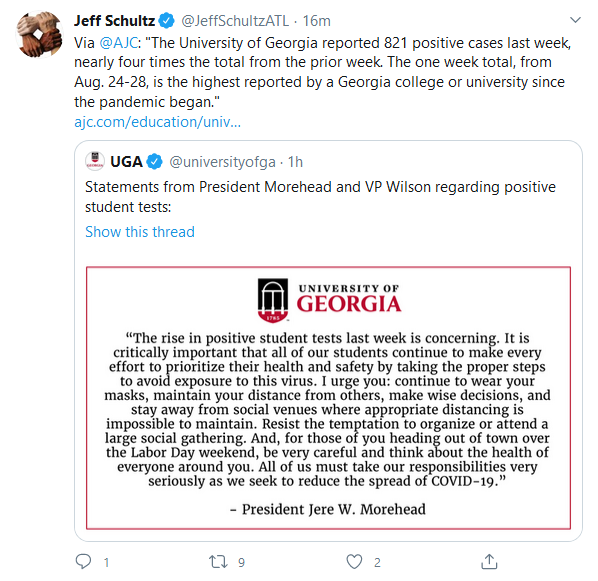 I sure hope Kirby is hammering his guys with a strong, stay away message and they’re listening.  Otherwise, this could get ugly.

I’m sorry, but do you really expect me to take at face value an article about South Carolina’s new offensive coordinator ($$) that doesn’t contain a single reference to balance?

It’s a rare Playpen that sticks to football as its topic, but this seems like a good subject for discussion:

What's the biggest "what if" in college football history? pic.twitter.com/AKfeqrjlMv

Sadly, as a Georgia fan, there are too many “what ifs”, but if I had to choose one, it would be:  what if Chris Conley had the presence of mind to drop the pass than ended the 2012 SECCG?

“What if” to your heart’s content in the comments.

All 14 SEC teams are in his top 25, including the entire top eleven. 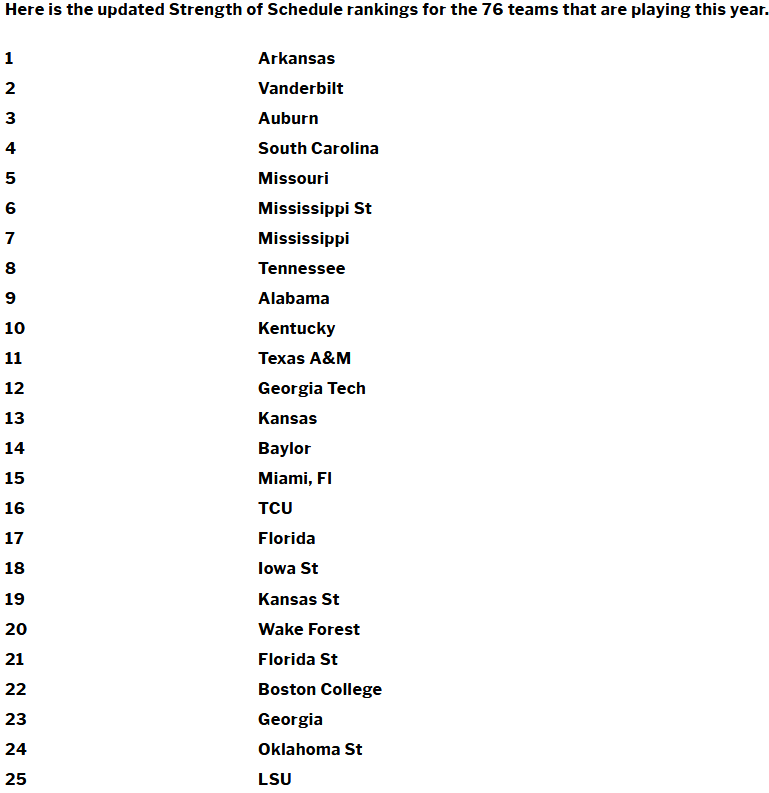 He’s about the only one I’ve seen rank Georgia’s schedule easier than Florida’s.  Not that there’s anything wrong with that.

What the latest preseason offensive depth chart projection tells us.

… After having the start of workouts delayed by over two weeks, the Bulldogs have been at it for more than two weeks and have one scrimmage under their belt. They conducted their 11th practice on Monday and held their game-like competition on Saturday inside of Sanford Stadium.

As you’d expect, Kirby Smart wasn’t exactly excited about what he saw. He’s always tough to please but he characterized the scrimmage as “sloppy” and said his team looked like one that had missed spring practice. That’s because it’s true and UGA, like so many other programs, is playing catch up for the time being.

The good news for the Bulldogs is that they haven’t had to miss any time. While other ACC, Big12, and SEC programs have been hit with small COVID-19 outbreaks, UGA has been able to avoid it. That has allowed Smart’s team to hold the maximum amount of practices thus far and it’ll get 14 more before traveling to Arkansas on September 26 to open the season.

As an aside, that last point Rowe makes is a good one, especially as a rebuttal to the “no spring practice means Georgia is screwed” crowd.  (Just in the past few days we learned Auburn had sixteen players out because of COVID, for example.)

Between the lines, it sounds like the skill position talent may be sorting itself out a little ahead of schedule, while the o-line is still a work in progress.  The good news is that there is still time and talent to work with.  What do y’all think?

I’d like to think if you’ve been reading this blog for a while, this won’t exactly come as a surprise to you. 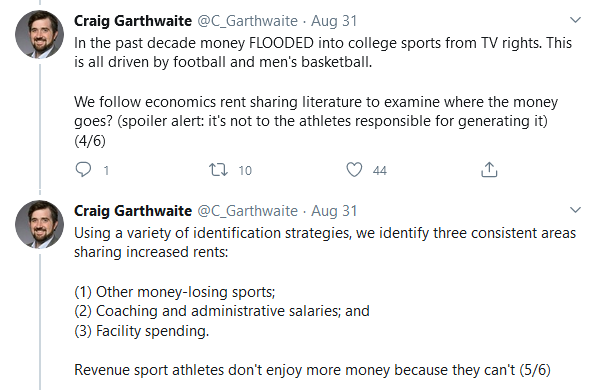 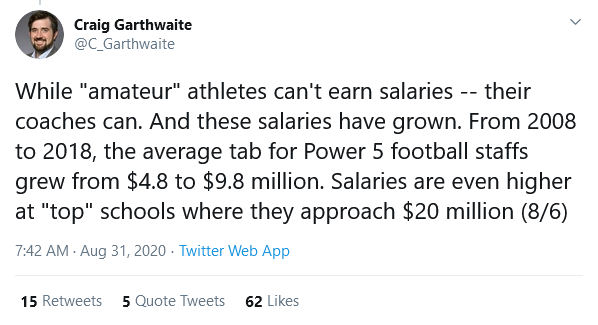 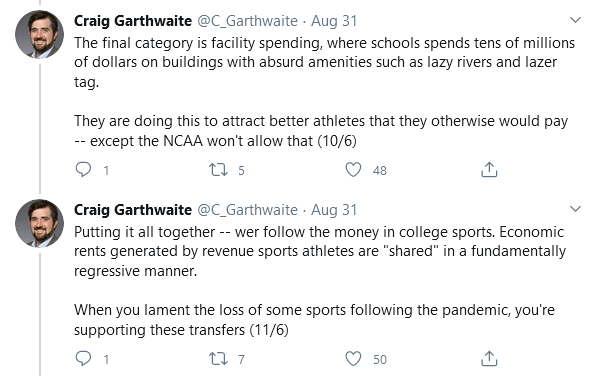 You know what else isn’t surprising?  This. (h/t)

Iowa’s assistant football coaches have been given their annual pay raises, but the additional salary will largely be eaten up by the athletic department’s mandated cutbacks.

Iowa is paying out $5.27 million in base salaries to its assistant football coaches this school year, an increase of $575,000 from a year ago, in addition to the $1.1 million given to former strength coach Chris Doyle as part of a separation agreement this summer…

That means most of the assistant football coaches are set to make slightly more in Fiscal Year 2021 than they did last year. For example, Jay Niemann, the newest assistant coach, received a 17.2% increase in his salary to $340,000, before the 10% will be reducted, making his actual raise $16,000 instead of the listed $50,000.

At this point, it almost feels more out of habit than anything else.  Amateurism is a helluva drug.

“It was as exclusive as it gets.”

Speaking of Dawgnation, in case it wasn’t already clear, Mike Griffith is very, very unhappy about Justin Fields attending a Georgia scrimmage, especially because of the poor Magill Society donor who wasn’t allowed to be there and suffered “confusion and hurt feelings” as a consequence.

One can only hope — at least if one is Griffith — that Kirby will embrace this as a learning experience and bend over backwards in the future to accommodate boosters, something the program has been notoriously lacking in doing since he got here.  In the meantime, he’ll have to live with this mark of shame:

Last Saturday’s scrimmage, however, will be remembered more for who was watching from within Sanford Stadium than who was on the field playing.

That was your first mistake.

This is what all in on the narrative looks like.

TV on @CBSSportsHQ: Who's the player to watch in the SEC? I'm all aboard the Kyle Trask hype train. Here's why: https://t.co/7JTmqCyEYH

TV on @CBSSportsHQ: Who's the most overrated team in the SEC heading into 2020? It's Georgia. I explain why here: https://t.co/Xcu70eTIXy

Give Sallee credit; at least you don’t have to waste time listening to the details.