Kirby got his 9-6 masterpiece.

They used the bye week to figure out they don’t trust Stetson Bennett.

Statistically speaking, this shouldn’t be a particularly close game.  Phil Steele’s Vegas Power Ratings has Georgia as about an 18.5-point favorite on a neutral field.  Sagarin has the Dawgs about a 14-point favorite at Lexington.

It’s always a coach’s goal to make the other team one-dimensional on offense and Kentucky makes that pretty easy.  The ‘Cats are last in the conference in passing yards per game and twelfth in passer rating.  (In their last game, they were 5-14 in the passing department, for 50 yards and one touchdown.)  They do like to run the ball, but other than Ole Miss, there isn’t another defense they’ve dominated.

They’re basically a well-coached bunch that tries to rely on their defense (third in the SEC in defensive yards per play) and screwing up less than the other guy.  UK is second in penalty yards per game.  (Georgia is last.)  UK has won the two games in which it has finished in positive territory in turnover margin and lost all three games in which it hasn’t.

Job one for Georgia, then, is pretty obvious:  First thing, do no harm.

Assuming mission accomplished there, my big question of the day is whether Monken embraces Kirby’s inner manball or tries to run some semblance of the passing attack we’ve seen through the first four games to give Bennett an opportunity to work out some of the kinks.  I can’t say for sure what we’ll see, but I have to believe Smart saw Missouri run 92 plays against UK last weekend.

As an aside, speaking of Bennett…

Oh, yeah.  Today features the number two and number eight teams in the country in punting.  Be still, my heart.

All in all, it adds up to a low scoring affair in which Georgia covers.  Say somewhere in the 24-7 to 28-10 range.  Let’s hope the Dawgs get out with a win and no injuries today.

Feel free to opine about the game in the comments.

Here’s today’s slate of games for your viewing pleasure. 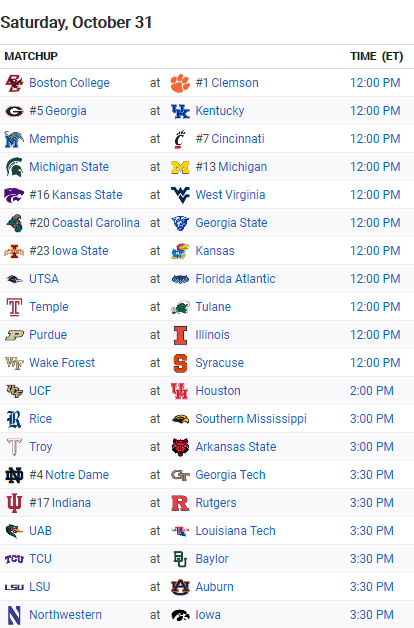 Your pithy observations are welcomed, as always, in the comments.

“There’s no benefit to this schedule, if coaches are being honest.”

I beg to differ, Junior.  As far as I’m concerned, this year’s SEC 10-game conference schedule has already paid one huge benefit ($$).

A visit from Florida was added to Texas A&M’s original SEC schedule, and the Aggies’ upset of the Gators delivered Fisher an important signature win.

Hey, let’s check in on the great “Kirby hired his buddy to coach something he’s never coached before” experiment and see how things are going.

Bold predictions ain’t what they used to be.

The GPOOE™ really goes out on a limb here.

NARRATOR’S VOICE: Kentucky has rushed for fewer than 100 yards more times than it’s rushed for 300+ yards this season.

U got the look.

Meanwhile, Gatewood, a former top-50 recruit and Auburn transfer, has appeared in each of the last three games. He played in the first three quarters of a game for the first time at Missouri.

“He looked comfortable,” UK offensive coordinator Eddie Gran said of Gatewood earlier this week. “I liked his eyes in the huddle. He’s got a little bit of that Stevie Johnson deal. It just doesn’t faze him. He was excited.

I hope somebody asks Ojulari and the rest of Georgia’s pass rushers what they saw in Gatewood’s eyes when they meet.

Games and the Fabris Pool lines:

Your savior ain’t walkin’ through that door any time soon.

With Daniels, tight end Tre’ McKitty gave a more detailed answer on where things stand with the transfer quarterback.

“He’s coming along great,” McKitty said. “He’s my locker buddy so we get to talk a lot. He’s looking to get back and help the team any way he can.

“I’ll go into meetings with him just to watch the film on the upcoming opponent. It’s great to have him around the team, working back through his injury. Hope to have him out there soon.”

He’s not physically ready and it’s unclear when he’ll be.  So, if you want Bennett pulled, it’ll be to get Mathis back in the game.  I assume the coaches have already debated that possibility in sticking with Bennett for now.

The key to Saturday’s game

Usually, I just mention turnovers as a background caveat to the outcome of a Georgia game, but in Kentucky’s case, it’s not background.  It’s front and center.

What would it take for Kentucky to pull off an upset over Georgia this Saturday?

JC: Turnovers, turnovers, turnovers. And more turnovers. Kentucky grounded Mississippi State’s “Air Raid” with six interceptions in a 24-2 win. It picked off three passes and forced a fumble in the win at Tennessee. Jordan Wright register a Pick Six versus MSU. Kelvin Joseph and Jamin Davis each registered a Pick Six in Knoxville. Stoops could use one (or more) of those on Saturday.

Overlay that with their turnover margin game log and it begins to make sense.

Hopefully, the staff has gotten the message to Bennett about that.