Shame if anything were to happen to it.

It’s that time of year again. 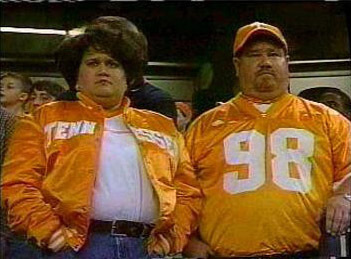 Does that look like a couple who wears masks?  But I digress.

I saw that a pundit described Tennessee under Pruitt as Georgia-lite.  The same thought occurred to me and at least one commenter.  Just like Smart emulating the Process to jump start the program when he arrived, Pruitt has followed the same approach.  It’s most readily apparent in the Vols’ lines of scrimmage.

There are two issues with that coming in to play today.  First of all, Tennessee’s roster isn’t as deep or as talented as Georgia’s.  That’s an issue both because UT is traveling and also because that’s likely reflecting in each team’s special teams.

The second issue is that Jim Chaney is Tennessee’s offensive coordinator.  I don’t say that to cast aspersions on Chaney, who is a good, albeit not an elite, OC.  He’s done a solid job managing UT’s offense to protect Guarantano.  The offense he runs is familiar to us, and therein lies the rub.  It’s the offense Kirby installed in Athens and it’s now two generations behind Saban.

Alabama had already taken steps to move in a different direction when Smart left and now Georgia appears to be doing something similar with Monken’s hire.  Pruitt, on the other hand, is comfortable running an offense that worked well for Alabama and Georgia in previous seasons, but has its own limitations in the present.

I can only imagine the pleasure Smart is about to take in loading the box and saying, “have at it, Jimbo”.

Seems to me both coaches go into this game with the strategy to make the other team’s quarterback beat you.  I think that favors Georgia simply because it has the better horses on defense.

That being said, there are a few wild cards that give me concern.  First, and most obvious, is the weather.  The latest forecast I’ve seen shows a slight chance of rain at kickoff, steadily increasing through the afternoon, with the heaviest falling at six and later.  (Whoever wins the coin toss might want to think about taking the ball first.)  At least the temperature won’t complicate things.

Second is penalties.  Georgia, dead last in the conference, is currently running at a pace better than twice that of Tennessee, both in terms of number of penalties per game (10 vs. 4.5) and yardage per game (83.5 vs. 35).  In and of itself, I don’t worry about that deciding a winner, but it can certainly have an impact on things like field position and scoring drives.

Third is turnover margin.  Tennessee is one of only five teams in the country that has yet to turn the ball over.  At +3, it’s tied for first in the conference in turnover margin.  (Georgia, at +2, is third.)  That’s a sign, at least in the early going, of a disciplined offense that’s made an effort not to put the ball at too much risk.  Can Georgia’s defense generate sufficient havoc to throw Chaney and the Vol offense out of their comfort zone?  And will the weather have an impact?

I do give credit to Pruitt for righting the ship after a disastrous start last season.  And while I recognize that their current eight-game winning streak has been built on the backs of less than stellar opposition, it still indicates the first step an improving program has to take, which is to beat the teams it’s supposed to beat.

All that in mind, Georgia is favored, and deservedly so.  I think the weather, ultimately, is going to be the limiting factor.  Georgia wins by ten, twelve points, and so doesn’t cover the early spread.  I’m good with that.

I’m heading out and heading up to Athens.  See you on the other side.

Feel free to add your pithy insights as the day progresses in the comments.

“What exactly is the Pac-12 Network right now?”

This really is the saddest quote.

One high-ranking conference official told me: “No media company wanted to partner with the Pac-12. ESPN declined. FOX, CBS, even the Discovery Channel declined. Nobody knows this.

Whether that’s truth or hyperbole, “even the Discovery Channel declined” rocks.

I didn’t realize until I read that piece that Larry Scott runs both the conference and the network and draws a salary from each.  Whatever pictures he’s got on people, they must be doozies.

Requests aren’t usually my bag, but I’ll make an exception in this case.

What’s really impressive about that is Georgia hasn’t really been very explosive on offense so far.  It’s just another indication of how stifling the defense has been.

Sorry, freedom lovers, but they’re not expanding attendance for the Cocktail Party.

Restrictions on sporting events that take place in a stadium setting have been lifted in the state of Florida but the annual showdown in Jacksonville between Georgia and Florida will take place in front of a limited crowd. The limitations, however, will be announced at a later date.

Georgia sports information released a statement on Friday providing assurances that the crowd inside Everbank Field on November 7 will be reduced. It also provided additional details on the safety measures that will be in place both at the venue and around the city of Jacksonville.

In efforts to ensure safety amongst all fans and attendees, the game will take place with limited capacity. In addition, RV City and all ancillary events including the Hall of Fame Luncheon and Duuuval’s Bold City Bash will not take place this year. Complete game day safety policies and procedures will be announced at a later date closer to the game.

The City of Jacksonville Division of Sports and Entertainment will host six Information and First Aid Zones within the Sports Complex and Downtown Jacksonville. The zones will provide free assistance to all fans and attendees that include first aid needs, transportation information, directions, and more.

The Jacksonville Sheriff’s Office is committed to providing the most current public safety and traffic information for the 2020 Georgia-Florida football game. JSO coordinates with the City of Jacksonville, the University of Florida and the University of Georgia to provide the information fans need to make the most of the weekend. All event information related to public safety, road closures and traffic can also be found on JSO’s website at www.jaxsheriff.org. For live game day traffic updates, passengers are encouraged to follow JSO on twitter @JSOPIO.

Speaking only for myself, that’s a relief.  Selfish, I know.

Filed under Georgia Football, Political Wankery, The Body Is A Temple

Just slingin’ in the rain

I asked earlier in the week how well Stetson can throw a wet ball.  This isn’t a complete answer to that question, but still…

“In high school, he loved Johnny Manziel,” said John DuPont, a teacher at Pierce County High who also calls the school’s games on radio. “He ran like him, too. We used to get called for a lot of holding penalties because he scrambled so much and would keep the play going so long that our O-linemen would get gassed and just hang onto guys.”

Bennett’s father, Stetson Bennett III, said his son always has been able to do that because, in addition to quickness, he has unusually large hands for his size.

I imagine unusually large hands are a good thing for a Mailman to have.