“The worst thing to do is to put someone in there and they’re not ready and they don’t have success, then you have a confidence issue,” Grantham said. “So I’ve always been a guy that I’d rather play them a week late than a week early from a developmental standpoint to make sure they’re ready, so we’ll continue to do that based on what we see in practice.”

If only Georgia fans could do the same.

Today's gem: "I get it, you want championships, but you have to build there."

With the election less than a week away, I thought I’d let everyone don their prognosticator hats and predict the outcomes.

One PSA — if you haven’t voted early, you might want to think about it.  My experience last week was impressive.  Plenty of folks working the polling site made for a smooth experience that took about ten minutes and I like the new machines that print a paper summary of your selections for you to review.

Anyway, have at it in the comments.

Zen and the art of winning college football games:

“It used to be that good defense beats a good offense. Good defense doesn’t beat good offense anymore,” Saban said. “It’s just like last week. Georgia has as good a defense as we do an offense, and we scored 41 points on them [in a 41-24 Alabama win]. That’s not the way it used to be. It used to be if you had a good defense, other people weren’t going to score. You were always going to be in the game. I’m telling you. It ain’t that way anymore.”

Kirby Smart ain’t buying what Tuscaloosa Yoda is selling, though.  At least sort of.

Smart said that there’s a lot of factors that are important for a team to be successful in today’s game.

“It’s not easy to say this or that,” Smart said. “There’s a lot of factors that go into it, but scoring offense and being able to score points is a tremendous factor, and a lot of the offenses have been ahead. The really good offenses have been ahead of the really good defenses, I don’t disagree with that. But, if you look across the board, there’s some teams that have really dynamic offenses and don’t have defenses, they struggle, they struggle when they go play really good teams.

Smart did state that it’s important for teams to have both, though.

There’s some misdirection going on there.  Saban isn’t saying today’s great teams don’t play defense; he’s just saying, push comes to shove, offense wins championships these days.  Kirby sounds like a man who isn’t quite ready to give up the dream ($$).

Kirbs, did you ever watch that 2015 Georgia-Missouri game?  Great is about the last word I’d associate with that debacle.  But I digress.

“So I don’t know when they’ll catch up,” Smart said. “I don’t know if they’ll catch up. I really don’t care if they catch up. Our job is to do the best job defending those kind of offenses that we can. And we want to defend them better than others. And I think we can do that. I think if you recruit well and you have good enough athletes, you have great enough players, you can defend great offenses better than everyone else. It doesn’t mean you’re going to stop them. But it does mean you can defend them better than everybody else.”

All well and good, but even Smart goes on to admit “you better be able to score yourself.”

The thing is, it’s not as if Georgia has to be among the elite of the offensive elite in order to be a legitimate playoff team.  Look at the top ten teams in SP+ this week. 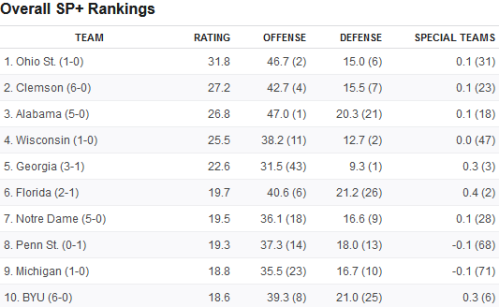 If Georgia were able to improve its offensive ranking into the low twenties or high teens, it would be right there with Alabama and Clemson.  Surely that’s not an impossible task.

Sights and sounds from around the world of college football for your dining pleasure:

Filed under Big 12 Football, Big Ten Football, Crime and Punishment, ESPN Is The Devil, It's Not Easy Being A Mid-Major, It's Just Bidness, SEC Football, The Body Is A Temple

Nothing to see here, Junior. Move on.

Kiffin also added: “I asked the side judge, ‘Why aren’t they replaying it? Do I need to challenge it?’ He said, ‘They’ve already looked at it. There’s nothing there.’ I’m not allowed to say anything about the conversation, but I really wish that our fans and players could hear what I was told.”

If anyone in the SEC office had a sense of shame, or at least responsibility, some heads would roll.  I suspect we know how that will play out.

“All I’ve ever been everywhere I’ve been is successful.”

Coach ATL sounds like a guy who’s been drinking a little too much Waffle House coffee.

While insisting that his team is on track to reach a “ridiculously high level”, he proceeded to channel his inner Booch.

Sounds like that seven-year plan is right on schedule.

Gettin’ buttah and buttah during the bye week

KIRBY: On Stetson's work this off week: Two hands on the ball in the pocket and while running. We have made an effort to improve that and decision making and check down throws. Stetson really worked hard on those things.

I don’t expect miracles Saturday.  I’d just like to see improvement finding the open receiver and not forcing throws.  If Bennett does that, the offense will improve markedly.

Cobbling things together from this and this, it appears that:

One key bit of news on the Kentucky side:

No Terry Wilson for the second straight day at UK's practice, according to Eddie Gran. My interpretation: Hard to see anyone but Joey Gatewood starting against Georgia on Saturday.

Terry Wilson hasn’t practice the last two days. Rumors on the radio here in ESPN Louisville is he might opt out.

Based on what I saw in the Kentucky-Missouri game, Gatewood is no Tua/Hurts type rushing in to save the day against a Georgia defense.  I imagine Lanning is going to have a few tricks to make his day uncomfortable.