Per the good folks at sicemdawgs.com:

From here, that looks like a very manageable schedule.  The opener’s a challenge, of course, but from there, I don’t see many serious roadblocks.  And Georgia’s November kinda looks like what we used to kid about Tennessee’s November.

There are eight straight conference games that run between UAB and Charleston Southern.  And South Carolina moves back to the early part of the schedule.  (Insert Spurrier snark here.)

Kirby’s got his secondary coach.

#DawgNation, join us in welcoming the newest addition to Georgia Football, @Coach_Addae!#GoDawgs pic.twitter.com/Y4W3Wk3gHD

Addae was more than just a cornerbacks coach at WVU this season.  As Bruce Feldman wrote a couple of months ago ($$), Addae was one of two assistants tasked with running the Mountaineer defense after Vic Koenning was canned as the DC in July.

They did alright, too.

The Mountaineers (5-3) lead the conference in total defense, fewest yards per play allowed, pass efficiency defense and red zone TD percentage. They also rank No. 4 nationally in the latter and in total defense after ranking No. 74 in both categories in 2018, the year before Brown took over in Morgantown.

#WVU secondary under @Coach_Addae in 2020

The only knock I can find on the guy is what he did as a player at West Virginia.

New #UGA defensive backs coach Jahmile Addae in the ’06 @SugarBowlNola—when he faced (and forced a fumble) vs. UGA… pic.twitter.com/bFAcl9rM3i

Forgive and forget, is what I say.  Welcome aboard, sir.

The Oklahoma Attorney General’s Office has been tasked with attempting to return a $2 million stockpile of a malaria drug once touted by former President Donald Trump as a way to treat the coronavirus.

In April, Gov. Kevin Stitt, who ordered the hydroxychloroquine purchase, defended it by saying that while it may not be a useful treatment for the coronavirus, the drug had multiple other uses and “that money will not have gone to waste in any respect.”

But nearly a year later the state is trying to offload the drug back to its original supplier, California-based FFF Enterprises, Inc, a private pharmaceutical wholesaler.

Alex Gerszewski, a spokesman for Oklahoma Attorney General Mike Hunter, told The Frontier this week that the AG’s office was working with the state health department “to try to figure out a solution.”

Talk about your thankless tasks.

By the way, don’t miss the bonus stupidity at the article’s end.

In August, Rep. Justin Humphrey, R-Lane, promoted hydroxychloroquine as a viable treatment after he had contracted COVID-19.

Though the drug had been widely discredited at that point, Humphrey, who has recently made news for seeking to establish a Bigfoot hunting season in Oklahoma and made waves in 2017 when he referred to pregnant women as “hosts,” encouraged Oklahomans to “take courage and begin treating COVID with Hydroxychloroquine.”

Do you need a special weapon to hunt Bigfoot (Bigfeet?)?

If we really do get the politicians we deserve, Gawd help you people in Oklahoma.

And with that, the floor is yours.

This should come as no surprise.

After a one year absence due to the COVID-19 pandemic, UGA is planning for a G-Day spring football game this year.

Like during the 2020 season, attendance at Sanford Stadium is likely to be limited capacity and because of that it may be a ticketed event this time.

“We kept the chairbacks in from the fall to be a limited capacity seating plan for G-Day,” athletic director Josh Brooks said. “If we have to have a limited capacity, we’ll probably go to a ticketed event or else we’d have to turn people away at the gates. We’re discussing a plan where we would charge a nominal fee for tickets and have the proceeds go to designated charities. We’ll continue to evaluate and work through logistics as we work through G-Day.”

My only question is how they plan on prioritizing ticket access.  If McGarity were still running the show, I know it would be first come, first served for Magill Society folks.  Does Brooks take a more democratic approach?

If you’re a Dawg fan, one reason to be enthused by UT’s reported hire of Josh Heupel is the hope that he’ll bring some of his trusted UCF staff along for the ride.

And to think they say you can never go home again.

It if happens, I’m sure Vol fans everywhere will give Heupel two thumbs up for the move.

The opposite of “if it ain’t broke, don’t fix it”

I dunno about you, but my first thought on seeing this…

… was to think the Gator defense is due for another confusing year.  I, for one, welcome our new schemes overlord.

How seriously should we take the 2020 season?

I took a look at the final set of F+ numbers for the past season compiled by Brian Fremeau and Bill Connelly.  (For those who need a quick definition:  “F+ Ratings combine Brian Fremeau’s FEI ratings with Bill Connelly’s SP+ ratings in equal parts. Overall team ratings (F+), offense ratings (OF+), and defense ratings (DF+) represent each team and unit’s standard deviation above or below average. FEI ratings (FEI) represent the per-possession scoring advantages a team would be expected to have on a neutral field against an average opponent, based on opponent-adjusted possession efficiency data. SP+ ratings (SP+) are tempo- and opponent-adjusted measures of college football efficiency based on play-by-play and drive data designed to be predictive and forward-facing.”) 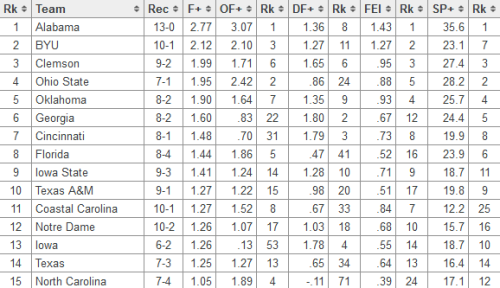 Other than the obvious takeaway that Alabama was head and shoulders better than any other FBS team, what more can we glean from those rankings, considering the variation in the number of games played, the weekly roster shifts due to management of the pandemic and the lack of cross-divisional games?

Obviously, I’m not posing that as a criticism of Brian and Bill.  They’re plugging the data, just like they do every season.  Even more, it’s not just the stats.  Given the uncertainties cited in the above paragraph, how much credit should we give our subjective assessments about 2020?  Do we call it the mother of all outliers and avoid any big picture statements?  If not, how do you weigh what you saw and what the numbers tell you about the quality of the teams that played college football last season?

Or, another way to put it — do you really think BYU, Cincinnati and Coastal Carolina deserve their F+ rankings?  If they do, is that simply due to placing them in the context of a weird year, or do you see them as legitimate national powers that will continue their success in 2021, assuming we approach something like normality again?

I thought the big news today would be the release of the 2021 SEC schedules, but it looks like it may be something else.

Tennessee AD Danny White has called a football team meeting for 8 am, presumably to announce hiring of new head coach.

Whom do you think the next legend in Knoxville will be?  Wrong answers only.

SOURCES: UCF’s Josh Heupel is finalizing a deal to be the next coach at Tennessee. Details here at @yahoosports: https://t.co/nrxs7cafwF