At the intersection of Georgia’s highest profile 2021 signee, social media and NIL rights:

… Icon Source has already compiled a list of potential top earners in the rising freshman class.

“You’ve got to find what is a little bit unique,” Garrett said. “All athletes will have their audience and there are numbers attached to them in terms of who they can influence. There’s always kind of a little extra something that makes brands excited to work with certain individuals.”

According to Garrett, the list takes into account, style of play, social media following and off the field factors, which in Vandagriff’s case is his local fan base in and around the Athens area.

“With Brock (Vandagriff) growing up and being from the Athens area, being a very exciting dual threat quarterback and going to Georgia who has had some uncertainty at the position,” Garrett said. “We think that he’s going to provide some immediate excitement to the team and anyone that wants to engage and work with him since he has such a strong local fan base.”

The problem some of you seem to see with college athletes earning a return off their names becoming distracted or traumatized by the experience is that you’re missing the social media aspect.  These kids already have their presence there; soon, they’ll be allowed to monetize it, like their non-athlete peers already do.

Interesting tidbit in the SEC schedule. New Mexico State goes to Alabama on Nov. 13 and then goes to Kentucky on Nov. 20. Published reports have the school making $3.1 million for those two trips.https://t.co/jncVuLjlaj

[Insert “when they say it’s about the money…” observation here.]

Today’s Playpen topic is a reader request (thanks, Russ!) that I thought would be fun.

I was listening to one of my favorite albums the other day “Marscape” by Jack Lancaster and Robin Lumley (Brand X).  It’s an instrumental album from the mid 70’s based (obviously) on a trip to Mars.  I’m sure it was inspired by the Viking 1 and 2 missions in the mid 70’s.  Anyway, it’s a cool album that I still enjoy and the interesting thing to me is that it was basically just random chance that I found it.

I was searching the cut out bins at Peaches in the mid 70’s when I came across the album.  It has a cool cover painting of the Martian landscape and that, along with the track titles, were enough to get my teenaged dollars (probably $2.99 or so).  Took it home, listened to it, and found that it was just to my tastes.  So much so that I still pull it out now on occasion.

I’ve had a few others like that.  Jan Akkerman (guitarist for Focus) had an instrumental guitar/stringed instrument album which I also found in the cutout bin.  But I knew of Akkerman because I liked Focus, so that one wasn’t as much of a stretch.

Anyway, this got me thinking.  What are some albums/artists that you discovered almost by accident that you still enjoy today?  I wonder what others have found?

I will start, because mine is such an easy choice.  When I was a college DJ hosting a weekly radio show, I’d show up an hour early to go through whatever new records had been sent to the station for promotional purposes.  Mostly, it would be a mix of things I’d been anticipating along with crap I wasn’t, but every once in a while I’d find a record I knew nothing about. 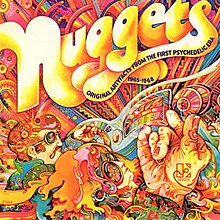 This was obscure at the time, obscure enough that I discovered later it was actually a re-release of a 1972 compilation.  I asked around, to see if anyone else had listened to it and got nothing but blank stares.  (Three weeks later, the same people were walking around telling me how great it was.)  Anyway, to start my show that day, I slapped the first side on a turntable, dropped the needle, heard The Electric Prunes’ “I Had Too Much to Dream (Last Night)” and played the rest in its entirety for my first set.  I did the same thing with the remaining sides over the next few weeks.

It’s still one of my very favorite albums that I play regularly to this day.

Share what you’ve got in the comments.  Rock on!

Brandon Marcello’s way too early look at the SEC, 2021 edition, is curious in the way it groups the conference’s programs.  He sorts them by whether they met, exceeded or missed expectations last season.

Given what COVID did to scheduling, that’s a little strange to start with, but what’s stranger is that he places Alabama and Florida in the “Exceeded expectations” group and stuck Georgia in the “Below expectations” group.  I assume those are his personal expectations, because most folks fingered Alabama to win another national title last season.  Florida must have had a superb start, for a team to finish on a three-game losing streak and still have exceeded expectations.

As for Georgia, sure, the Dawgs didn’t win the SEC East.  But a number of pundits predicted that would happen in the preseason.  8-2 and another top ten finish may not have been everything we hoped for, but somehow including the Dawgs in a bunch that includes 5-5 LSU, 3-7 Tennessee, 6-5 Auburn and 2-8 South Carolina seems like something of a stretch.  Georgia is the only team in his group that didn’t fire its head coach or change out both coordinators this offseason.

I guess he’s got very high standards for Kirby.

The difference between accumulation and implementation

I will be curious to see how 247Sports’ Team Talent Composite shapes up for 2021 when it’s released in late summer (Georgia was #1 in last year’s).

In the meantime, here’s how the five-year average of recruiting classes, including 2021, looks. 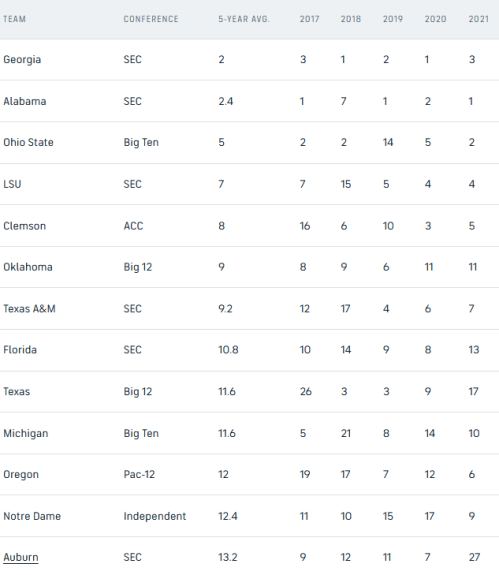 Now, that list probably isn’t quite as nuanced as it could be.  For one thing, it doesn’t take into account how dominant Alabama’s 2021 class is.  Still, it’s pretty clear that Saban and Smart have been recruiting at a higher level than any other coach in the country.

However, there isn’t as much hardware on display in Athens as there is in Tuscaloosa.  Might be a good time to work on that, Kirbs.

Let’s check in and see how Josh Heupel is progressing assembling a crack defensive staff at UT.

The Tennessee Volunteers are searching for a new defensive coordinator. Recent reports have linked them to Ohio State LB coach Al Washington.

However, per a report from FootballScoop.com, the highly coveted assistant was expected to remain with the Buckeyes.

That hasn’t stopped the Vols from trying, though. Per the report, the Vols have offered a 3-year deal to Washington worth $1.2-$1.5 million per year:

According to both Southeastern Conference and Big Ten sources, the deal is said to be a three-year offer with a total value between $1.2 and $1.5 million per year, on average.

The Vols are making some progress on the offensive side of the staff under new coach Josh Heupel, but the defense has yet to take shape.

How long will the Vols pursue Washington before moving on?

If you answered “not very“, give yourself a cookie.

In 2020, Blake Baker was the defensive coordinator for Miami, but then he left to take the LB coach job at LSU earlier this offseason.

Now, it seems Baker could be in the mix to return to the rank of “coordinator” as he’s reportedly in the mix for the open Tennessee defensive coordinator position.

If you’re wondering why a defensive coordinator at a P5 program would voluntarily demote himself to coach at LSU, it’s not because he prefers Cajun cooking.  It’s because he sucked at his job in Miami.

Manny Diaz was planning to take the defensive play calling duties away from Blake Baker next season.

Yeah, things are definitely shaping up in Urnge Country.

Source: LSU assistant Blake Baker, who talked to Tennessee about the DC job, has decided to stay at LSU.

An early look at the new direction

If you’re curious about whom Georgia’s defense will be facing in the season opener, here’s a look at how Clemson will attempt to fill the shoes of its four biggest offensive producers from 2020.

Collectively, Lawrence, Etienne, Rodgers and Powell accounted for 82 percent of Clemson’s yardage in 2020 and 48 of the team’s 64 offensive touchdowns.

Reading between the lines, it may be that replacing Etienne may be the Tigers’ biggest challenge.  Uiagalelei will be fine.  (He’s also 6-5, 250 pounds, which makes me wonder how easy it’ll be for Georgia’s pass rush to take him down.)  Getting Justyn Ross back at receiver is huge.  He will be a challenge for whoever Georgia’s next cornerbacks are.