I love Clemson in the spring.

A couple of noteworthy items from it:

Enough to go around, and then some

“For now, the days of buying out coaches’ contracts like drunken sailors are gone,” one Division I athletic director said in April on the condition of anonymity in order to speak freely.

Gus Malzahn walked away from Auburn with more than $21 million guaranteed. Texas paid almost $25 million to buy out Tom Herman and his staff a few months after layoffs and furloughs. South Carolina paid Will Muschamp $12.9 million to go away. Even Arizona, a month after laying off 21 employees, agreed to pay Kevin Sumlin’s $7.5 million buyout (subject to offset).

Unless, by “for now”, Mr. Anonymous AD only meant until the end of April.

Truth of the matter is, at least in the upper reaches of D-1 football, pandemic or no pandemic, there’s still a sea of cash to pay coaches with, and enough ADs who lack the ability to formulate a plan much beyond give Jimmy Sexton what he’s asking for.  Here’s another example:

Here’s a quote from a college coach a few years back:

“Every college coach I talk to won’t say it on record, but everyone’s thinking, ‘Should I go to the league?’”

That was Kirby Smart in 2015, when he was Alabama’s defensive coordinator, speaking to 680 The Fan in Atlanta. Smart said the grind of recruiting had become non-stop with phones. He was right then and it’s still true now. The job does not stop, and assistants have to handle recruiting much more than head coaches.

So why haven’t they followed Kirby’s lead?  (Hell, why didn’t Kirby follow Kirby’s lead?)  You only get one guess.

But the money has increased as well. At the top of the Power 5, college coaches are making as much money or more than NFL coaches.

And so it goes.

247Sports has posted the transfer portal numbers.  Here’s how the SEC shapes up on the departure front: 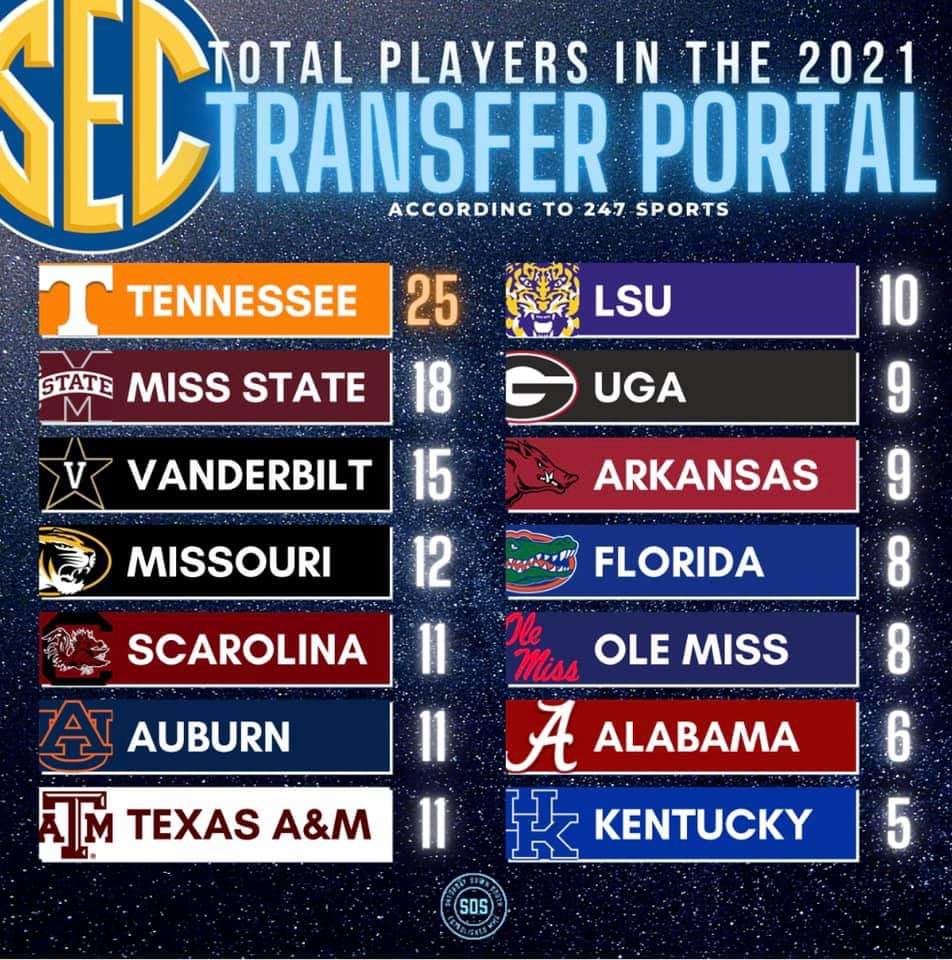 Yes, those numbers include walk-ons, judging by Georgia’s list.  Every one of Georgia’s departing players has landed elsewhere.

Hate to keep beating a dead horse, but the Vols have lost an entire signing class to the transfer portal.  That’s stunning, especially considering the quality of some of the players who’ve left.

On the other hand, you’ve got to hand it to Nick Saban, don’t you?  All that talent stacked up, along with a monster 2021 class, and only six players head for the hills.

Filed under SEC Football, Transfers Are For Coaches.

“Another day, another downer.”

It’s pretty obvious they haven’t reached bottom on the Tennessee football program yet.

But given all the talent that’s already moved on — running back Eric Gray, linebacker Henry To’o To’o, linebacker Quavaris Crouch, lineman Jahmir Johnson, lineman Wanya Morris, defensive back Key Lawrence and kicker Brent Cimaglia, to name but seven — it’s hard to see any way for Tennessee to win more than four to five games a year over the next two seasons at the very least.

Not exactly the recruiting pitch Heupel needs to attract the best and the brightest wanting to compete for championships from the get-go, is it?

Maybe all this was necessary. Maybe the violations are bad enough that the only way to save the football program in the longterm was to all but destroy it short-term. Maybe, also, Heupel is a miracle worker who can create an offense capable of eating up both enough yardage and clock to protect a suspect defense and steal a win or three between now and when things eventually return to normal.

Yes, that’s a lot of maybes there.

So, question for you:  what’s a realistic time frame for Tennessee football to be… well, if not back, at least relevant?