I’ve got to say, in fourteen-plus years of blogging here, this — a summer workout schedule Erk Russell made for his defensive players — is one of the coolest reader submissions (thanks, Mike!) I’ve ever received. 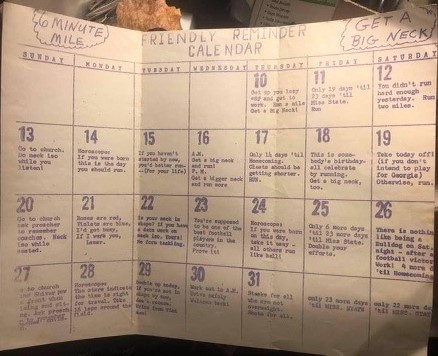 I hope you can expand it to read the entries, because they’re a wonderful combination of motivation, wit and, perhaps, a little judiciously applied fear (from the 15th:  “If you haven’t started by now, you’d better run (for your life)”).  In short, a perfect window into the man.  Enjoy.

Wanna get excited about something?  How about the returning production JT Daniels has to work with in 2021?

@DawgOutWest and I kicked off the show with some @Dawg_Stats with @SEC receivers that return with 50+ targets. UGA and MSU are only squads that have 3. Pickens, Burton, and Jackson should lead the way for the deepest position group for the Dawgs https://t.co/EnS4Ig3oTl pic.twitter.com/JjyvacwVqN

Pickens, Burton and Jackson make for a helluva starting point.  Add in an up and coming Arian Smith, a couple of studs recovering from serious injury in Blaylock and Rosemy-Jacksaint, and some others from a loaded 2020 class, and you’ve got plenty to work with.  (All that’s before you get to the tight ends and James Cook.)

If you want a little discussion on the matter, here you go.  (Although they’re wrong about the loudest moment at Sanford Stadium this century.)

You up?
……
…….
‘Cause if you are you should watch @DawgOutWest and @Dawg_Stats preview Georgia’s absolute haul of returning WRs and TEs.https://t.co/atrx3Mxg0y

Meanwhile, at the Supreme Court…

Quite a few heavy hitters have signed on with amicus briefs in support of the Alston plaintiffs.  I won’t list them all, but will cite the two most significant.

One was filed by former NCAA officials.

In an unprecedented show of collective dissent from those who have served within the NCAA’s ranks, six former NCAA employees filed an amici curiae brief Wednesday in support of former college athletes who are suing college sports’ governing body over antitrust claims related to scholarship restrictions.

In a “friends-of-the-court” petition in the Supreme Court case NCAA v. Alston, five former NCAA investigators and a one-time senior executive have said the association’s position has failed to keep up with the times.

“Though they once supported and enforced all of the NCAA’s rules,” the brief states, “with the benefit of further experience and hindsight, amici have come to believe that the NCAA’s current restrictions on college athletes’ receipt of education-related benefits do not promote ‘amateurism,’ which the NCAA itself has admitted has no fixed definition.”

Among the group, the most notable petitioner is Mark Lewis, who served as NCAA executive vice president until 2016. In 2014, Lewis was among the NCAA’s key trial witnesses in the separate class action lawsuit brought by former UCLA basketball star Ed O’Bannon over the publicity rights of college athletes.

Will that carry more weight than the one filed by a couple of guys who didn’t understand the issues and another doing his lawyer friend a favor?  Gee, I dunno.

The bigger one — the biggest one, in fact — is this:

With regard to the DOJ’s request to participate, understand that it’s not seeking to overthrow amateurism altogether.  It wishes to step in to make the point that the relief the NCAA is seeking is overbroad.

In its amicus brief, the Justice Department asserts that the NCAA and its members ought not to receive preferential treatment under antitrust law. This is an area of law that requires competing businesses (such as colleges that vie for students, faculty, staff, grants, media attention, among many other pursuits) to only conspire in ways compatible with the basic tenets of competitive markets. The brief acknowledges that “schools must agree on at least some aspects of the competition” in order to make college sports work. The brief also points out that the NCAA and member schools have long portrayed the amateur status of athletes as “essential” to organizing and marketing college sports.

The Justice Department doesn’t necessarily disagree with the broad concept of amateurism. However, it objects to amateurism avoiding standard scrutiny for antitrust law litigation. “Contrary to [NCAA’s] contentions,” the brief maintains, neither the unique characteristics of the college sports industry nor case precedent “suggest that the challenged restraints should have been analyzed [by the Ninth Circuit] under a standard more relaxed than the traditional rule of reason.” The Justice Department’s reference to “rule of reason” is a reference to the customary way collusive activities by competing businesses are judged, whereby possible procompetitive qualities of the collusion (such as more choice for consumers or greater economic growth) versus anticompetitive harms of the collusion (such as higher prices or diminished innovation) are weighed.

The brief also casts doubt on NCAA worries over the potential loosening of amateurism rules for educational expenses. To that end, the Justice Department questions why the NCAA “highlights the possibility of atypical lucrative internships given by boosters” when the Ninth Circuit’s ruling “does not affect NCAA rules that prohibit boosters from providing such internships.” This reiterates a theme expressed throughout the brief: If upheld, the Alston ruling wouldn’t prevent the NCAA from continuing to deny compensation for athletes when that compensation is tied to athletics.

That’s true, as far as it goes, but still a disastrous result from the NCAA’s viewpoint, because nothing about it would prevent state legislatures and Congress from restricting the NCAA’s amateurism enforcement reach.  Without an antitrust exemption, Mark Emmert is going to get nibbled to death.  And he’s not getting one from Congress.

The DOJ’s request is a BFD, in other words.

First, the justices will likely accord added weight to the views of the Justice Department than they would, with all due respect, law professors, attorneys, economists, players’ associations, athletes and other interested parties. The Justice Department is not a mere commentator or observer. It is charged with enforcing federal antitrust law in the United States. The Department’s views on a federal antitrust dispute are thus especially meaningful. The agency also has an ongoing stake in college sports litigation. In January, the Justice Department signaled concerns to the NCAA over potential name, image and likeness guardrails. It will likely continue to weigh in on amateurism, especially should any of the federal NIL bills advance in Congress and land on the desk of President Joe Biden.

Second, the Justice Department wants to participate in the oral argument. It wishes to do for purposes of a “divided argument.” This occurs when the Solicitor General—the federal officer who represents the country before the Supreme Court—determines that the interest of the country would be better served by having a direct voice in the oral argument than to rely on the parties’ attorneys (here, attorneys for the NCAA and Alston). The Solicitor General can draw on department expertise and historical understandings.

Again, a sensible organization would read the writing on the wall and try to salvage what it could via a settlement.  But this is the NCAA we’re talking about.

UPDATE:  I wonder if this is destined to come up in oral arguments.

They're now the "MSU Spartans Presented by Rocket Mortgage," part of a new five-year deal with @RocketMortgage https://t.co/awz7PHtWPD

Jeff Long rides off into the sunset.

Of course, you just knew that if anyone would raise a “do it for the kids” defense, it would be Long.

“I’m pretty upset, but I know how the world works. I’m just sick because I tried to do everything the right way with high ethics and morals and doing the right thing for young people. That’s the only thing that disappoints me,” Long said.

What a smarmy asshole.

Unfortunately for Jeff, that’s not what disappoints everyone else with a brain who’s watched Kansas athletics since he took the helm.

The tide on Long retaining his job seemed to turn Tuesday afternoon when it seemed he would remain in control and be allowed to make the next hire. However, when asked during a Zoom call about his history of football hires (Miles, Bobby Petrino, Bret Bielema) he became defensive.

When Long asked how those hires had been deficient, a media member replied, “on the field.” Kansas alums and fans reacted negatively on local radio and social media after the Zoom conference.

They ought to inscribe that on his tombstone.

Filed under Big 12 Football, It's All Just Made Up And Flagellant

“… the whitest school in the SEC.”

You’ll be shocked, shocked to learn that there’s another academic scandal at, of all places, Auburn.  But, Auburn being Auburn, there’s so much more.

Thomas was the director of academic support services for Auburn football until March 1. That’s the day Auburn fired him. He is now suing Auburn for discrimination. A lawsuit against Auburn was delivered in Thomas’ name last Friday, and I was emailed a copy of the complaint on Monday.

It claims that Auburn discriminated against Thomas based on race and gender. Essentially, this is the case: a grade for a football player was apparently changed in December of 2019, and Thomas allegedly was fired for knowing about it, but his three superiors were not because they’re white women. The lawsuit also alleges that Thomas experienced a hostile work environment and unfair pressure because football players were making bad grades.

“I feel like a lot of this was done to sabotage my career and make sure I don’t get another job in athletics,” Thomas said.

The quote in the post header comes from my favorite part of the allegations in the lawsuit.

This lawsuit alleges that Thomas was the “token” Black guy of his department “to provide the illusion of racial and gender equality by Auburn University, and help Auburn defend itself against its criticized image as the whitest school in the SEC.”

… As for Auburn’s whiteness, well, it is indeed the whitest school in the SEC, according to U.S. News’ 2019 campus ethnic diversity rating system. Auburn scored a 0.27 with 1.0 being the highest possible score for diversity. That puts Auburn right there with BYU and the University of Charleston. I would argue that Ole Miss and Alabama historically have a whiter “criticized image” than Auburn, but that’s not really a debate anyone wins.

Oh, I disagree.  We’re all winners here, at least those of us on the outside looking in.

I just hope somebody asks Spurrier to update his observation about Auburn academics:

On a fire at the Auburn library that destroyed 20 books: “The real tragedy was that 15 hadn’t been colored yet.”

I didn’t come up with this thought on my own, but saw it on a Georgia message board (h/t RedDawg) and had to share.

What do Travon Walker, Dominick Blaylock, George Pickens and Kenny McIntosh all have in common?  They’re 2019 signees who didn’t enroll early, which means, Gawd willing, they’ll be going through their first spring practice at Georgia in just a few days.

If there’s a more quintessential song of my younger days than the Box Tops’ “The Letter”, I’m hard-pressed to think what it might be.  All I have to do is hear that percussion intro, and I’m immediately catapulted back to all those eighth-grade parties I went to, when it seemed like every band in Atlanta had it as part of their repertoire.

(As an aside, I always get a kick out of Alex Chilton’s puberty reversal, from that raspy tenor there, to his higher pitched vocals with Big Star.  But, yes, I do digress.)

The cover I’m posting today doesn’t come from one of those bands, though.  It’s Joe Cocker’s tour de force.

The whole thing is so over the top nutso, but damned if it doesn’t work.  Cocker’s spastic intensity is front and center, of course, but right with it is Leon Russell’s production.  So, yeah, my vote goes with the cover.  How ’bout yours?