And now, a brief message from our quarterback

Hopefully, that works out better than this did:

An old, not so familiar face resurfaces

That should make for an interesting afternoon, methinks.

NFL listed Jamie Newman among those who were to be available to media after UGA Pro Day tomorrow, but I'm told that Newman won't participate tomorrow and will go to Wake Forest's Pro Day. No official word from UGA on that.

The Portal Master™ isn’t a nihilist.

Shorter random GatorsTerritory writer:  I mean, say what you want about using the transfer portal as a crutch for mediocre recruiting, Dude, at least it’s an ethos.

Filed under Gators, Gators..., Transfers Are For Coaches.

I’m not posting this in an attempt to mock Chip Towers. 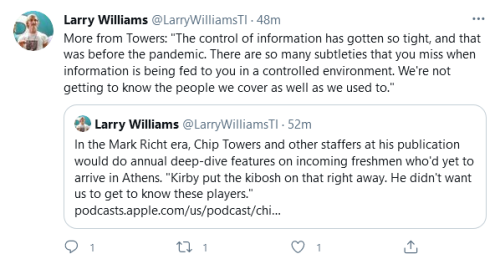 Rather, it leads me to ask you guys a question:  assuming the accuracy of his accusation, how much do you care that the press has less access to Georgia’s players?  For me, it’s a mixed bag.  As a blogger, the more information about the Georgia program, the better.  As a sympathetic fan, though, I can see why Smart might want to limit the access of 17- and 18-year olds who are just now getting their sea legs under them.  In other words, sometimes kids do say the darnedest things.

That all being said, I think it’s bullshit the assistant coaches aren’t permitted to speak more often with Georgia’s beat writers.  They’re not kids away from home for the first time in their lives.  Gawd knows, I would have loved to have heard a lot more from Todd Monken last season.  But that’s a separate question.

Anyway, enough of me.  What do y’all say?

Roster management crisis in the making?

There’s a good ESPN piece here ($$) about the consequences to flow from the NCAA’s decision last year to grant every fall student-athlete an extra year of eligibility if they so choose.

The challenge is that there is no rule allowing teams to go over the scholarship limit beyond 2021.  So what happens if the NCAA never comes up with anything to address that?  Well, here’s just a little taste of what’s to come:

Coaches will get extra scholarships for the seniors in the 2021 season, but they don’t have any help for the 2022 season with juniors who would have been seniors this coming season. Those players normally would come off the books after this upcoming season, but since they’re now technically juniors, they can come back in 2022.

Some of those older, veteran players will graduate from school academically, but still have eligibility left, which is likely going to cause some uncomfortable conversations and decisions between coaches and the student-athletes.

“The gray area that I don’t think a lot of people understand is you’re only bound to these guys until they graduate,” the first source said. “Once they graduate, you don’t have to renew their scholarship. A lot of people don’t do that because it’s not a good practice and if they’re good players you want them to stay, but that’s part of what could happen with all of this.”

It doesn’t sound like that transfer portal will be getting smaller any time soon, in other words.

On the Plains, stupid is as stupid does.

If you were wondering what kind of financial inducement Auburn would have to offer Gus Malzahn’s replacement — after all, it’s not every day a school punts a coach who’s beaten Saban a few times and gone to a national title game — to entice him to come to the Plains, well, here you go:

New Auburn football coach Bryan Harsin has signed a six-year contract with the school that will pay him an average of $5.25 million, according to documents released Monday…

If Auburn fires Harsin without cause, it will owe the coach 70% of his remaining salary through the contract term, half of which will be paid within 30 days of termination. The remaining 50% would be paid out over four years, and Harsin’s guarantee is not subject to offset or mitigation. Auburn had a similarly structured agreement with Harsin’s predecessor, Gus Malzahn, who was fired in December.

Harsin made $1.85 million in his last season at Boise State and reportedly was looking to move on to a place with greater financial resources.  He must think he died and went to heaven with this deal.  And, although I don’t believe Jimmy Sexton represents Harsin, he probably feels the same way, too.

Boy, it sure is a good thing schools have grasped some degree of financial sanity in the wake of the pandemic.

Filed under Auburn's Cast of Thousands, It's Just Bidness

Quite a few Dawgs won’t be making much of an appearance, if at all, this spring.

Dominick Blaylock and Marcus Rosemy-Jacksaint, two receivers who expected to be a big part of Georgia’s rotation next fall, aren’t quite going to be up to speed yet after surgeries last fall. Last September, Blaylock tore the ACL in the same knee that knocked him out of the 2019 SEC Championship game against LSU. Rosemy-Jacksaint suffered a lower-leg fracture in the Florida game last November.

“Both of those guys are able to run straight-line and are beginning to increase their workload,” Georgia coach Kirby Smart said two weeks ago. “They have to work separate. But they are increasing speeds and they’re right on schedule for where they need to be.”

Also recovering from a knee injury is defensive tackle Julian Rochester, who is attempting to make a return for a sixth season. He obviously won’t practice this spring.

Also affecting depth at linebacker is the anticipated absence of heralded signee Xavian Sorey. The 5-star prospect out of Florida’s IMG Academy had foot surgery in late January and is not expected to get much team work.

I guess you could say Ron Courson will be getting his spring reps in, too.

This is a development that may be overtaken by future events, but it’s worth noting in the meantime, anyway.

The decision was made by the league’s Board of Directors and was done so unanimously.

The ACC’s intraconference transfer rule was created by the membership in 1996 (excerpt of ACC Bylaws included below).

“The time has come for all student-athletes to have the opportunity to transfer and be permitted to compete immediately,” said ACC Commissioner Jim Phillips. “This decision is in the best interest of our student-athletes as it allows greater flexibility during their collegiate career.”

Phillips is the former AD at Northwestern.  In that role, he opposed the unionization move that players on the football team spearheaded.  All that makes this quote ($$) all the more interesting.

“The freedom of movement is something that we all appreciate,” Phillips said Monday afternoon. “In your job that each of you have, if you want to move forward with a place who you’re working with, you can. At the higher education level, professors can move from school to school, teachers, instructors, students can move, coaches, ADs, commissioners can move, administrators can move. And a majority of programs can except for these five (football, men’s and women’s basketball, baseball, men’s ice hockey).

It’s not that he’s saying anything particularly radical there.  It’s just that we’re so used to seeing a complete lack of common sense coming from college athletics administrators that it seems radical.  Who knows, maybe it’ll start a movement.

Filed under ACC Football, Transfers Are For Coaches.

You know, my first thought was to mock this tweet.

Breaking: #UCF lands Georgia QB Thomas Castellanos. He scored over 40 TDs in 2020, and picked UCF over schools like #FSU and #GeorgiaTech.

But then I saw this explanation…

UCF opting to let him play QB while others like GT wanted him as an athlete so this makes sense and could be a good fit. https://t.co/1n736BEsXo

… and realized Tech’s recruiting has done a complete 180.  Back in the Genius’ day, it was GT that was getting commitments from recruits being sought by other schools as athletes by promising they could stay at the QB position.

I’m not saying that’s an improvement, but it’s certainly a change.  (Although if it means Collins has a better chance of signing kids who would otherwise have gone to SEC rivals, that is an improvement, I suppose.)