“And we wonder why there’s no credibility in college athletics.”

This is gold, Jerry.  Gold!

Just a legendary press release. … Wedged that one sentence way down there. pic.twitter.com/dPftx9UqQB

The sputtering and disbelief over the news that Mark Emmert’s had his contract extended an additional two years is simply epic.  Here’s just one example:

The most galling part of the contract extension the NCAA Board of Governors gave to president Mark Emmert on Tuesday is that it was embarrassed to give it to him. It is made up almost entirely of college presidents, a group of people that often pay $50,000 retainers to public relations consultants to use buzz words like “transparency” and “accountability.”

When it actually came time to be accountable, transparent and show a smidge of credibility, the “servant leaders” — there’s another favorite — all hid like the gutless and clueless group we’ve expected leading the NCAA.

In the 494th word of a press release the NCAA sent out at 9:06 p.m. on Tuesday, the organization snuck in a casual mention — under the heading “Other Business” — that embattled president Mark Emmert received a two-year contract extension. His deal is now extended through 2025, and the NCAA poured another layer of cement on its reputation as the most dysfunctional and rudderless organization in sports. 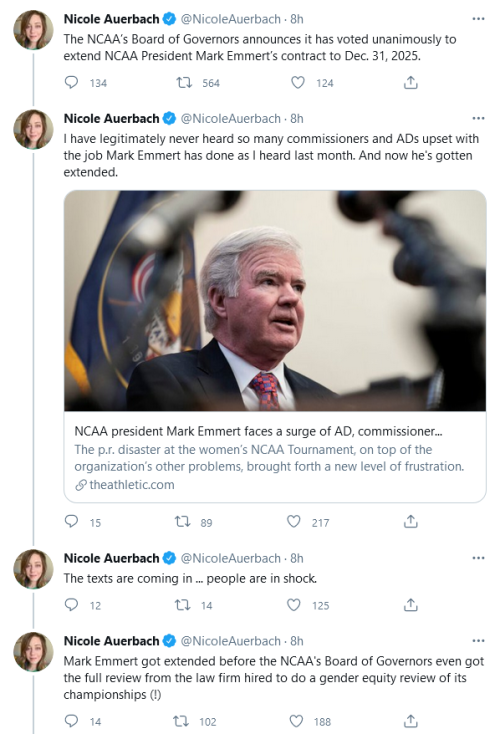 I have to confess that I misread the situation when I saw the news that Emmert was in the mix to be the next head of LSU.  I thought he was looking for an exit strategy.  Instead, he borrowed Todd Grantham’s annual move of exploring his NFL options to wrangle a better deal out of the school.

Mark Emmert just Jimmy Sexton’d the NCAA!  He is truly their indispensable man.  Talk about a bunch that deserve each other…

28 responses to ““And we wonder why there’s no credibility in college athletics.””