Mark Emmert… and a pony

In 2nd sentence of written testimony for today’s Senate Commerce Committee hearing, NCAA’s Mark Emmert says: “There is nothing we do as an Association that is more important than promoting and ensuring the well-being of college athletes.” 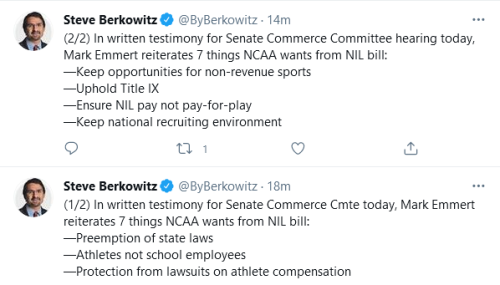 Doin’ it for the kids, for the win!

UPDATE:  More here.  Emmert is all in on the impending apocalypse.

According to his testimony, Emmert is expected to again encourage lawmakers to create a federal bill to universally govern NIL while also expressing concern over a hodgepodge of differing state NIL laws that, he writes, “threaten the NCAA’s ability to provide uniform NIL opportunities as well as fair, national competition.” Ongoing litigation against the NCAA, coupled with the varying state laws and some Democrat-backed proposed Congressional legislation, endanger the very nature of college athletics, he says.

Swimming with the sharks

Hoo, boy.  Bryan Harsin obviously hasn’t figured out whom he’s tangling with yet in his new job ($$).

Bryan Harsin, Auburn’s new coach, would like to see this issue solved in a simple and straightforward way. “Allow the schools the chance to manage their 85,” he argues. “Take the initials out of it. If you lose five, you sign five. If you lose 10, you can sign 10.” If you understand why the 25-man limit was created in the first place, though, it’s clear why others are much more reluctant to embrace that logic.

“You don’t want to have a rule in place that would encourage coaches to run off the average players in their spring training to bring in better ones,” Brown said. “That’s the trouble with adding more initials. Would people be fair, or would they just try to improve their roster by trading up with a better player in the transfer portal?”

I’m shocked, shocked you’d believe coaches like Saban and Smart would even think about doing something like that.  Because of course they would.

Welcome to the neighborhood, Bryan.

Filed under SEC Football, Transfers Are For Coaches.

The smartest people in the world

Every new article I read about playoff expansion reinforces my belief that the people running college football (you can add “into the ground” here, if you like) are morons.  Check out the brilliance radiating from Dennis Dodd’s piece.

Driving the discussion now are several factors. Obviously, there is the money. Two industry sources said, depending on the size of the field, an expanded playoff could be worth two or perhaps even three times more than the current $7.2 billion that ESPN is paying the CFP. The average annual payout of the current deal is $475 million. However, typical of media rights deals the payout is backloaded to increase in the final years.

A significant part of the discussion is less about access and more about enhancing the value of the regular season. A sort-of playoff fatigue has formed around the recent stranglehold Alabama, Clemson, Ohio State and Oklahoma have put on the game.

“We could go to 24 , and you might still have Alabama and Clemson playing for the championship,” said one person with intimate knowledge of the process.

That’s some enhancement you got there, fellas.

It sounds like Greg Sankey has other fish to fry, though.

“The SEC is going to push 12 because of their brand. I’m hearing 12,” a Group of Five AD told CBS Sports.

A 12-team field would presumably allow for six automatic bids — Power Five conference champions and the top-ranked Group of Five team — along with six at-large bids.

While the SEC might not be overtly driving the discussion for 12 teams, such a structure would likely benefit the game’s most powerful conference. In an eight-team bracket, the SEC would all but be guaranteed two spots annually. In a 12-team bracket, that number could be three or four teams given the current strength of the league and how well it performs in the CFP Rankings.

“The SEC wants more at-larges,” one AD located in the South said.

No shit, Sherlock.  Even SEC hater Danny Kanell gets that.

New CFB 12 team playoff proposal last year could have looked like this:

How great would this be?

Concern was expressed that ESPN’s “Who’s In?” advertising campaign for the CFP has drained interest from the second half of the college football season. That source wasn’t the only one who thought the playoff-or-bust mentality had impacted interest. A growing number of ADs and coaches have been critical.

There has been enough thought on the subject that one Power Five source speculated about the impact of a 24-team field.

“You’d have half of FBS that would still be alive in November for those slots,” the source said. “We’re not going to 24, but theoretically, that’s what I think we can accomplish with this.”

Sure, man.  Everybody knows the cure for playoff-or-bust mentality is to keep growing the playoff because that will make Mickey pay less attention to an event it has the exclusive broadcast rights for.

What really gets me about all this crap is that these are the same people who led playoff expansion for college basketball.  They know from real world experience what happens to the value of the regular season as the postseason grows, not just in terms of the impact of the games themselves, but also in terms of the broadcast dollars.  That they have convinced themselves it’ll be different this time is borderline delusional.  But not surprising.  It’s what you get when the dumbest people in the room are convinced they’re the smartest.

Thought it was kind of interesting to see three Georgia players make the list:

Meanwhile, check out all these players whom Georgia will face this year:

That’s a whopping five players from Clemson alone there.  Looks like there will be some fireworks in the opener, if PFF is on to something.

This week’s Recruiting Mailbag at The Athletic ($$) started out with an interesting question:  assuming every school is recruiting at their peak ability, who would have the top 10 classes?  Wasserman takes that to mean schools take care of their in state recruiting first, topped by some national success.

Under that hypothetical, LSU would be a slam dunk for me — a state loaded with recruits, literally no P5 competition for the Tigers, topped with access to East Texas talent is about as good as it gets.  But that’s not the program that tops his list.  (LSU is third.)  This is:

1. Georgia: No team in college football has a better home-court advantage than the Bulldogs, and they have also proven they can recruit at the top tier nationally. Just owning the state of Georgia alone hands them the crown. Even if Georgia Tech gets where it wants to go, there is more than enough talent in the Peach State to keep Georgia No. 1 nationally.

Bill Connelly looks at Clemson and likes what he sees ($$).  The Tigers’ projected win total is just a smidge under eleven and they’re second in projected SP+.  They’re favored in every game on their schedule and only the opener against the Dawgs is seen as a relative toss-up.  (“That Week 1 battle with Georgia is going to be spectacular, though.”)

What’s more interesting to me is his breakdown of the team, which can be summarized as follows:

I have yet to see anything to change my mind from its first position on the Clemson-Georgia game, which is, simply, the team with the offensive line that holds up best wins.  And you?

Filed under Clemson: Auburn With A Lake, Stats Geek!

“I think it’s inevitable that Georgia at some point will win a national title.”

Marc Weiszer does a good job assembling a few pundits who don’t buy into the “Georgia, if not now, then when?” narrative.  As AP’s Ralph Russo says,

“All you can ask for from your coach and your team is to put yourself in position to be in that discussion every year,” Russo said. “Where Georgia is, they’re in that discussion every year. At some point, they’re going to have to beat Bama and it’s going to be very hard, or LSU. They are where they are. The idea it’s championship or bust this year, why? Why would it be championship or bust this year? They have two five-star quarterbacks that are coming after Daniels. The machine is rolling here.”

True dat.  The only negative comment that sort of leaves a mark comes from LSU beat writer Glenn Guilbeau, who makes this point:

Offensively, Georgia has the talent “to be as good as anyone in the SEC,” Guilbeau said but he wonders if Smart is all-in on opening up the offense. “He’s had some quarterbacks in the past, but Kirby’s philosophy has not been to join the rest of the league from a modern-sense. Maybe he’s ready to do that. …They definitely have the weapons to make a mark this season.”

His pessimism isn’t misplaced, admittedly.  If he’s right about it continuing, I sure have overestimated the impact the 2019 SECCG had on Smart.  Call me a naive optimist, but I don’t think he is.

Friends, this year, when Georgia says it’s gonna use the tight ends, Georgia really means it.

… Whatever it is, the nation’s No. 80 overall prospect (247Sports Composite) believes that tight ends can be exclamation points in the Georgia “Air Raid” variant offense.

“They are throwing the ball to the tight end now,” Delp said. “It is showing. [Todd] Monken is doing that also. It just really opened my eyes. It was awesome.”

Georgia’s tight ends are no longer sleek road graders. Hartley’s room is no longer “eye candy” in the Bulldog offense.

His father, Chris, has always been open about his recruiting. To be honest, his father has told him he didn’t know if Georgia was right for him.

“That was because of their tight end usage and all that,” Oscar Delp said. “Then after this trip, he kind of looked at me and said ‘Look, man. That trip really answered every question’ and ‘this place could be a real good fit for you’ and just stuff like that.”

Maybe it’s just me, but I don’t think the problem was that Georgia’s tight ends were “sleek road graders”, whatever the hell that’s supposed to mean.

The funny thing is gonna be when Georgia tells Arik Gilbert he’s not a tight end, but tells recruits he is.