It’s that time of year when Kirby lets his coordinators out of the room to prove they exist.

Lots of quotes there, but I think this one’s my favorite.

Dan Lanning on Jordan Davis: "Jordan doesn't get moved." Anticipates him being a player who can play three downs. https://t.co/qYf9uV8TbG

#Gators legend Brandon Spikes, embarrassed about last year's defense, reached out to challenge LB Ventrell Miller: "Do you want to be one of these guys that just comes and goes and then they’re forgotten?"https://t.co/jQuWOJR5dn

“Or, do you want to be Marco Wilson?”

A bang(ed) up start

Georgia didn’t make it out of its first weekend of preseason practices without a starter on offense being sidelined by injury, according to sources.

Center Warren Ericson sustained an injury to his left hand that he uses to snap the ball and that could keep him out for several weeks. UGASports.com was the first to report on the injury.

Redshirt freshman Sedrick Van Pran-Granger could step in for Ericson until he’s able to return.

Georgia opens the season on Sept. 4 against Clemson in Charlotte.

I mean, what could go wrong?

At least it happened early in fall practice so Van Pran-Granger will have some time to get acclimated before facing one of the best defensive lines in college.  Hope he’s got his shotgun snap down right.

One last thought about Georgia, the Great Underachiever:  when this season is over, how will be characterize the program’s results?

Well, if you share Adam Rittenberg’s perception, it’s a binary choice.  Natty or bust, in other words.  If you want a little more nuance, though, keep reading.  I’ve got three scenarios for you to consider.

Georgia doesn’t play in the SECCG

Yeah, given the state of the division and Georgia’s conference schedule, falling short of a trip to Atlanta would be a fairly massive underachieve.  A no-brainer of a take.

Georgia plays in the SECCG, finishes the regular season 11-2 with losses to Clemson and Alabama and plays in a bowl game

Disappointing?  To be sure.  But do you characterize losing to two of the teams that pretty much every poll, major pundit and advanced stat guru show as higher ranked programs as underachieving, especially if the losses are close ones?  If you do, you don’t think that word means what I think it means.

Georgia plays in the SECCG, finishes the season no worse than 12-1 and qualifies for the CFP

This is where the nuance starts to get fun.  Yes, the regular season schedule is soft after the opener, but consider what Georgia has to do to win a natty this season.  If the Dawgs show up for the national semis, it’s more likely than not they’ll be seeing Alabama and/or Clemson again.  (Remember, in seven seasons of the playoffs, those two programs have only missed the field one time each.)  And if the football gods really want to stack the odds, it’s possible for Georgia to have to play both of them a second time to win a national championship.  That’s got to be an unprecedented gauntlet.  If the Dawgs don’t make it through, does that mean they underachieved?

UPDATE:  The preseason Coaches Poll is out.

All Georgia has to do to win a natty is run through nos. 1 and 2.  More than once.  Easy peasy!

Adam Rittenberg took to Twitter yesterday to defend his take on Georgia as college football’s biggest underachiever.  I found it revealing.

More elite prospects in Georgia and the South. Not even close. Ohio State has a case for No. 1, but I talk to coaches about this all the time and most say Georgia.

It doesn't, no. Georgia has everything to be a true national power, regular CFP participant and occasional national title winner. Any other expectation or rationalizing of what you've seen over the years is selling the program short.

Now, do I think that’s a fair assessment of the current state of affairs?  I do.  But, let’s remember the context of Rittenberg’s article, where he said he was “focusing on results from 1981 to 2020, but placing greater emphasis on the past 15-20 years”.

So, I’ve got a simple question:  when, exactly, did Georgia cross the threshold into being the number one underachiever in the country?  Are we supposed to believe that the current state of affairs has actually been locked in stone since Dooley won a natty in 1981?  I sure don’t.

To start with, take a look at a chart of Bill Connelly’s tracking the SP+ of the program over the past 65 years. 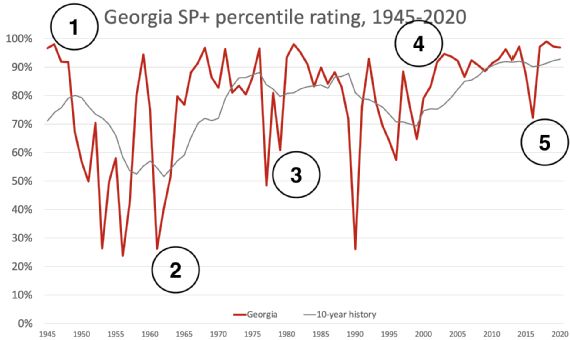 That is not the chart of a sustained, high level performer.  Instead, it’s a story for the most part of peaks and valleys.  Don’t take my word for it; take Bill’s.

Georgia’s longest period of consistent performance was ushered in under Richt.  It dipped at the very end, and under Smart’s first season, but it’s been at a high level again after 2016.

Has Georgia really been the number one choice of a majority of college football coaches all that time?  It’s hard to reconcile that position with the coaches the program hired after Butts retired, a series of D-1 assistants (to be fair, Donnan was a head coach at Marshall before coming to Athens).  Also, this argument conveniently ignores the way the athletic department was run for decades.  Have we already forgotten how late Georgia was to the IPF party, or, going back a few years, how it was the last SEC school to sign assistant coaches to multi-year contracts?  And how slow was the program in reacting to the way Alabama and Florida changed conference recruiting budgets?

And what about recruiting, anyway?  Has Georgia been the hotbed of elite prospects Rittenberg cites for all that time?  First off, you almost have to eliminate the time before segregation ended and college football rosters began to be populated with black athletes.  Second, it’s hard to ignore how this state was not mentioned in the same breath as states such as Florida, Texas and California when it came to the best talent pools in the country until fairly recently.

Don’t forget that when Bear Bryant made his sleeping giant observation about another SEC program, he was referring to Florida, not Georgia.

If you want to make the argument that the program underachieved with Richt at the helm, particularly after 2007, I certainly wouldn’t argue with you.  This chart bears that out:

Five of the six P5 schools ahead of Georgia won national titles during Richt’s tenure.  (So did Auburn.  Ugh.)  Before that, though, it’s hard to view Georgia as a national power, as it simply lacked the consistency, the direction and the resources to qualify as one.  After Richt?  Well, Smart’s put in five years as a head coach and in that time he’s got an appearance in a national title game, an SEC championship and three division titles.  Maybe I’m missing something, but I don’t see many of his peers with a similar resume at the beginning of their respective careers.

It’s one thing to look at Georgia’s performance over the past few years and not feel some manner of disappointment.  Hell, I’ve been there, done that.  But to extrapolate missing a natty because of a busted coverage into conclusive evidence that a football program isn’t getting it done — and, let’s face it, that’s really the bottom line of Rittenberg’s pitch — is a real stretch.  At least I think so.

Another practice in the books

The media wasn’t allowed in, but the school released a bunch of pictures.

There's former Florida and South Carolina head coach Will Muschamp coaching up the #Dawgs on the field. And Derion Kendrick (11). And Flo Jo Adam Anderson (19). And Kelee Ringo's legs…(5) pic.twitter.com/n79hK2IsGj

Gawd almighty.  His shorts look like the legs are about to bust.