Is Warren Ericson about to get Wally Pipp’d?

Sedrick Van Pran, come on down.

Georgia coach Kirby Smart doesn’t make starter announcements. Never has. But he came close to doing so Thursday night when he sent Sedrick Van Pran up to the Butts-Mehre’s second-floor studio for post-practice interviews.

Smart generally doesn’t designate spokesmen who don’t have a significant role on the team.

Indications are Van Pran is about to. The redshirt freshman center from New Orleans and has never started college game, but it’s looking like that’s about to come against No. 3 Clemson and its renowned defensive front.

If they move Salyer inside to guard, that means they can flank Van Pran with he and Shaffer, which makes for some experienced bookends.  If not, it’ll be interesting to see who pairs with Shaffer at the other guard spot.

Whatever Matt Luke is deciding, sooner rather than later is probably a good thing.

The Alliance of Horseshit

The Big Ten, Pac-12 and ACC are expected to make a formal announcement about their alignment soon, perhaps as early as next week, multiple sources told The Athletic. It’s not yet clear how specific the announcement will be because there are so many details to iron out, although administrators in all three leagues have stressed in recent conversations that issues of governance can and should be front and center.

Schools within the three conferences believe they are like-minded, that they want to continue to prioritize broad-based sports offerings and that the academic profile of their institutions matters — as does graduating athletes.

Yeah, when in doubt, say you’re doing it for the kids.  Even when it’s more about spite.

There is hope within all three leagues that their commissioners will align to delay the implementation of an expanded College Football Playoff. Athletic directors in all three leagues have expressed concerns over the composition of the four-member working group that proposed the 12-team format and treated it as an inevitability without hearing from any representatives of the three leagues.

Hey, if the Pac-12 is principled enough to walk away from a 12-team CFP format, more power to ’em.  It still doesn’t change that had Oklahoma and Texas approached one of them first, they’d have done the exact same thing Sankey did.

I give Dennis Dodd credit — give me a lede with Joe Lee Dunn in it, and I’ll read the whole deal.

The seeds of college football’s most popular defense reside in the recesses of a 75-year-old coaching mind. Joe Lee Dunn’s time has largely come and gone, but the game owes the coaching veteran something more than a passing mention heading into the 2021 season.

It owes him a place in history.

Dunn is credited with helping refine the 3-3-5 “Stack” defense.

There’s a certain amount of throwing stuff up against the wall to see what sticks, but this does appear to be the defensive philosophy du jour:

A “hyper-light” box is a three-man front that breaks down modern spread defenses to an essence: stopping the run with as few people as possible. The fewer the better to defend the pass downfield.

Of course, this, just like about every strategy, has its tradeoffs.

Verticals: The best way to beat the Stack is for all the pass catchers to run straight streaks toward the end zone. “It always comes down to the four verts,” one former Big Ten defensive coordinator said. “How are we going to cover four verts?”

Pressure … or lack of it: With only three down linemen to confront, offensive lineman can outnumber the defense.

Stopping the run: With that many defenders at the second and third level, savvy offensive coordinators will simply run the ball and physically dominate.

Sure sounds like when you come back to it, the Jimmies and Joes still matter the most.  This, too, though.

“Obviously, they’re scoring more points [these days],” Long said. “It’s much more difficult to stop, partially because of rules. You can’t touch quarterbacks. … The rules are such that the defense could be aggressive enough to slow people down, but you can’t intimidate anymore. You have to be more finesse because very few people are lining up trying to pound the ball. Nobody’s patient.”

Georgia Tech, just a whiteboard away 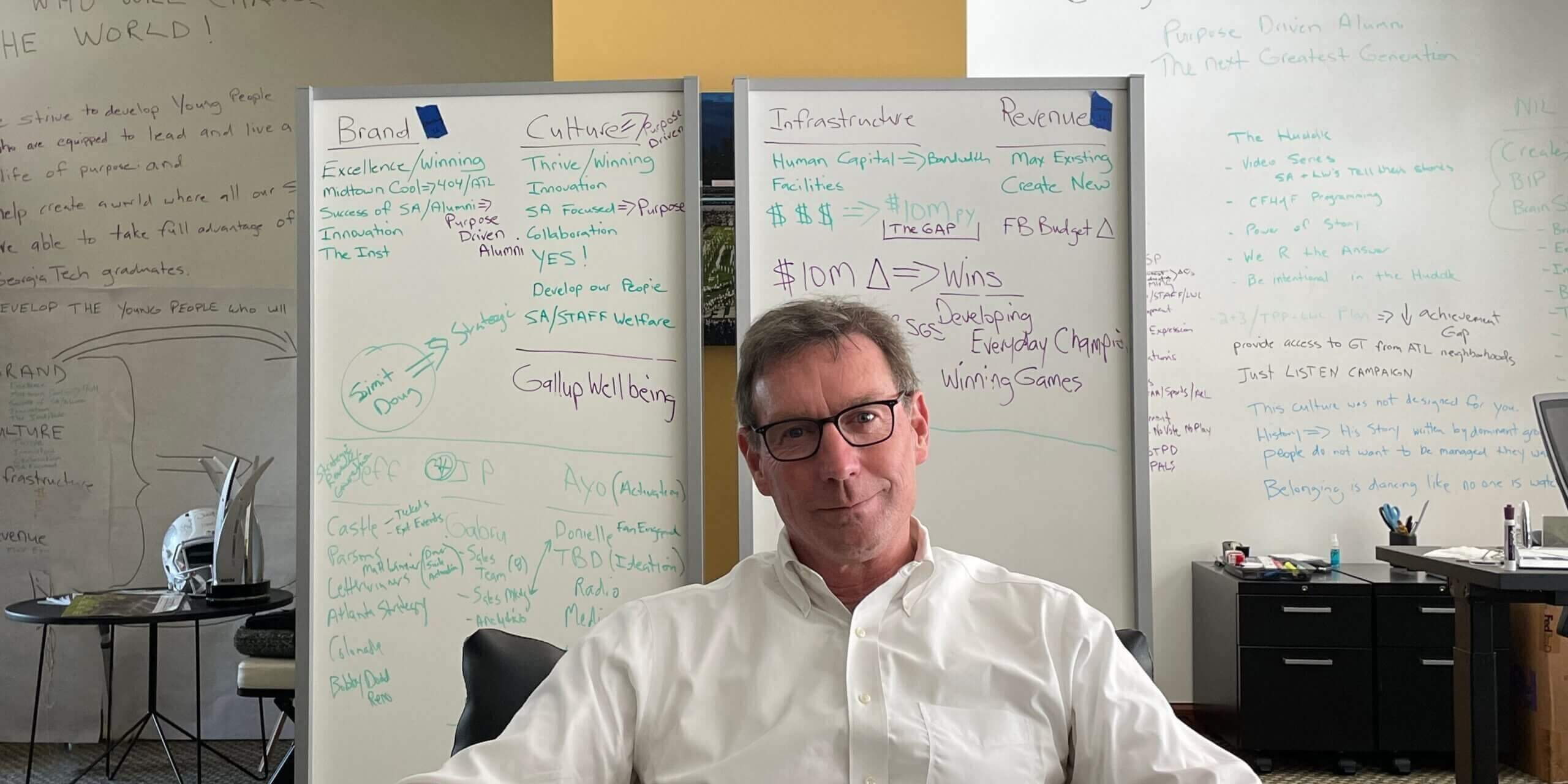 Leave the bottle on the bar.

When he was 10 years old, Stansbury and his family were vacationing in Daytona Beach, Fla., in the spring. Several Georgia Tech football players happened to be staying in the same hotel. There, in the lobby and by the pool, young Todd Stansbury was mesmerized by these college football players, especially quarterback Scott Zolke.

“He could do some amazing things with beer cans off his forehead,” Stansbury recalled a few years ago. “I said when I grow up, I want to just be just like those guys.”

“Can’t figure out how they haven’t won more.”

Another day, another Adam Rittenberg column about Georgia being a disappointment.

Georgia is one of the great mysteries in college football: a top-5 job without enough top-5 results. Smart might be the coach to elevate the program but needs a championship this fall or in the near future to truly validate the progress. What Georgia could be is a tired refrain if the program never actually reaches that level.

Swinney has fully tapped into the potential that Clemson didn’t fully realize under his predecessors. The Tigers have everything they need to continue dominating the ACC and making CFP appearances. As long as Swinney is at the helm, Clemson should be a force both on the field and in recruiting. But what about when he leaves? A dropoff is possible if not likely, and it could be a significant step backward.

“[The better job] should be Georgia, but right now it’s Clemson,” an industry source said. “But if Dabo retires tomorrow, what’s the better job? It’s going to be hard to follow Dabo.”

The next year or two ultimately will shape Smart’s tenure at Georgia, but he’s already spearheaded important changes and investments to put Georgia on par with similar programs, especially in the Southeast.

“What Georgia could be is a tired refrain”.  He’s certainly doing what he can to make that a reality.  Does Kirby owe him money or something?

Burglary charges were filed Thursday against six University of Kentucky football players over an incident at a March private party, according to Lexington police Sgt. Donnell Gordon.

On Saturday, March 6, 2021, there was a party being thrown at a residence. During the party, three people entered the residence uninvited and were asked to leave. The three became upset and threatened they would return, Gordon said

A short time later, the three individuals returned with additional people., Gordon said. The group allegedly forced their way into the residence. One suspect pointed a firearm at a victim.

As a result of the investigation, Reuben “RJ” Adams, Robert JuTahn McClain, Andru Phillips, Earnest Sanders IV, Devito Tisdale and Joel Williams were charged with first-degree burglary, according to police and court records.

Tisdale has also been charged with wanton endangerment. He’s accused of pointing the handgun at one of the victims.

… In a separate statement released by the school, head coach Mark Stoops said the team has been aware of the incident since March.

“I am aware of the situation that arose today,” Stoops said. “Out of respect for the legal process, I cannot comment on the charges. We have been aware of this matter since March, as we withheld the players from team activities while a student conduct review was held. Based on the outcome of the review, the players returned to activity in June. We are evaluating the current situation as we receive more information.”

Generally speaking, “Out of respect for the legal process” is one of those things you don’t want to hear your head coach say.  Then again, these kids may just have been trying to fit in with the program.

Dan Berezowitz, Stoops’ chief of staff, had an assault charge against him dismissed on Tuesday, but remains suspended by the university. Jovon Bouknight, UK’s wide receivers coach, was arrested for a DUI in June but later reached a plea deal that saw that charge dismissed; he returned to the team following a suspension.