And then he goes and spoils it all…

This is equally painful and amusing.

Lane Kiffin says his 'popcorn' comment wasn't premeditated, that he got caught up in the emotions. "I actually said (to OC Jeff Lebby) on the headset 'I just said something really stupid. You better score a lot of points.' "

That worked out well.

UPDATE:  The full quote has a pretty great punchline.

Lane Kiffin was asked about the popcorn moment in the pregame interview of the Ole Miss-Alabama game. Among the highlights: “It looks like we didn’t plug the microwave in, buddy.” pic.twitter.com/wcLQJjntlb

Brad and Gary showing up for the Kentucky game…

A big one between the Wildcats and Bulldogs.

We've selected @UKFootball vs. @GeorgiaFootball as our 3:30 PM ET game for our October 16th SEC on CBS doubleheader. pic.twitter.com/Ug99Cvahxs

Dawgs have an off week after that — and then get Brad and Gary again.

If you don’t have your health, what have you got?

Receivers Dom Blaylock (hamstring), Marcus Rosemy-Jacksaint (ankle) and Arian Smith (lower leg) are all going to see how much more they can do in practice this week.

"They're all three much closer this week than they were last week. But they're not definite."

At 41 ppg, Georgia is eighth nationally in scoring.  They’ve managed that while missing several key members of their receiving corps in those games, along with their starting quarterback from two of the five.

Is Todd Monken a wizard?  I’m willing to consider the possibility.

This is what I posted about after the game the other day.  Pretty damned cool.

Respect is earned not given. Says a lot about the Head Coach .@RazorbackFB

And now, the Auburn game

Let’s just get this out of the way.

I’m gonna let Bill Connelly ($$) kick off this week’s festivities with this observation:

The “I’m not falling for it, Bo Nix” list

Bo Nix. Auburn’s quarterback, the subject of a quarterback controversy just a week earlier, was at his wheelingest and dealingest on Saturday night in Death Valley, escaping impossible pressure on multiple opportunities, making some wild decisions and leading the Tigers to their first road win over LSU since 1999.

It was a glorious adrenaline rush, and for entertainment’s sake, here’s to hoping he provides a few more moments and games like that. But Georgia’s defense is on deck. Let’s just say a renewed quarterback controversy seven days from now wouldn’t be the most surprising thing in the world.

For all the wheeling and dealing, don’t lose sight of the fact that Nix finished the LSU game with a 108.45 passer rating.  The second coming of Mac Jones he’s not.

Observations from the 35, Hawg-tied edition

In some respects, the outcome wasn’t a surprise at all.  I expected a comfortable margin, which is what we got, although Arky’s loss of composure starting on the first series of the game made for a lot more comfort than I predicted.  Still, the under was the correct play.

That being said, Saturday was a reminder that I’m a blogger and Todd Monken is paid what he’s paid because he’s a great offensive coordinator.  I looked at Arkansas’ 3-2-6 defense and had visions of 12 formations and tight ends blowing up Odom’s scheme.  Monken looked at that three-man front and went with manball to blow up Odom’s scheme.  I’m not sure I even saw any 12 formations until the second half.  No Georgia tight end caught a pass.  (Of course, when there were only seven completions, there aren’t going to be many throws to catch.)

Georgia’s run-pass ratio was 56-11.  That’s Kirby Smart’s wet dream.  Arkansas only ran 45 plays all game, partly because Georgia’s offense hogged time of possession and partly because out of the ten series Arky ran, they went three-and-out in seven of them.

One other part of Monken’s game plan that deserves much credit was how he used shifts to throw off the Arkansas defense.  Several of those running plays were helped by bad run fits as the Hog defenders were often misaligned as they tried to adjust.

Stetson said after the game he was told last Monday he’d be the starter because of the injury to Daniels.  Monken knew all week where he was going with his game plan.  Talk about taking what the defense gives you!  If it wasn’t perfect for the opponent, it’ll do until perfect comes along.  My hat’s off to the man.

On to the bullet points.

Putting up back to back conference shut outs is nothing to sneer at.  In fact, Georgia hadn’t done that since 1980.  When you can dominate behind your backup quarterback only attempting ten or eleven throws, brother, you’ve got yourself a team.  There’s plenty to point at with this team’s performance through five games, but perhaps what’s most impressive is how they’ve been able to maintain their focus throughout.

Next stop, the Plains. 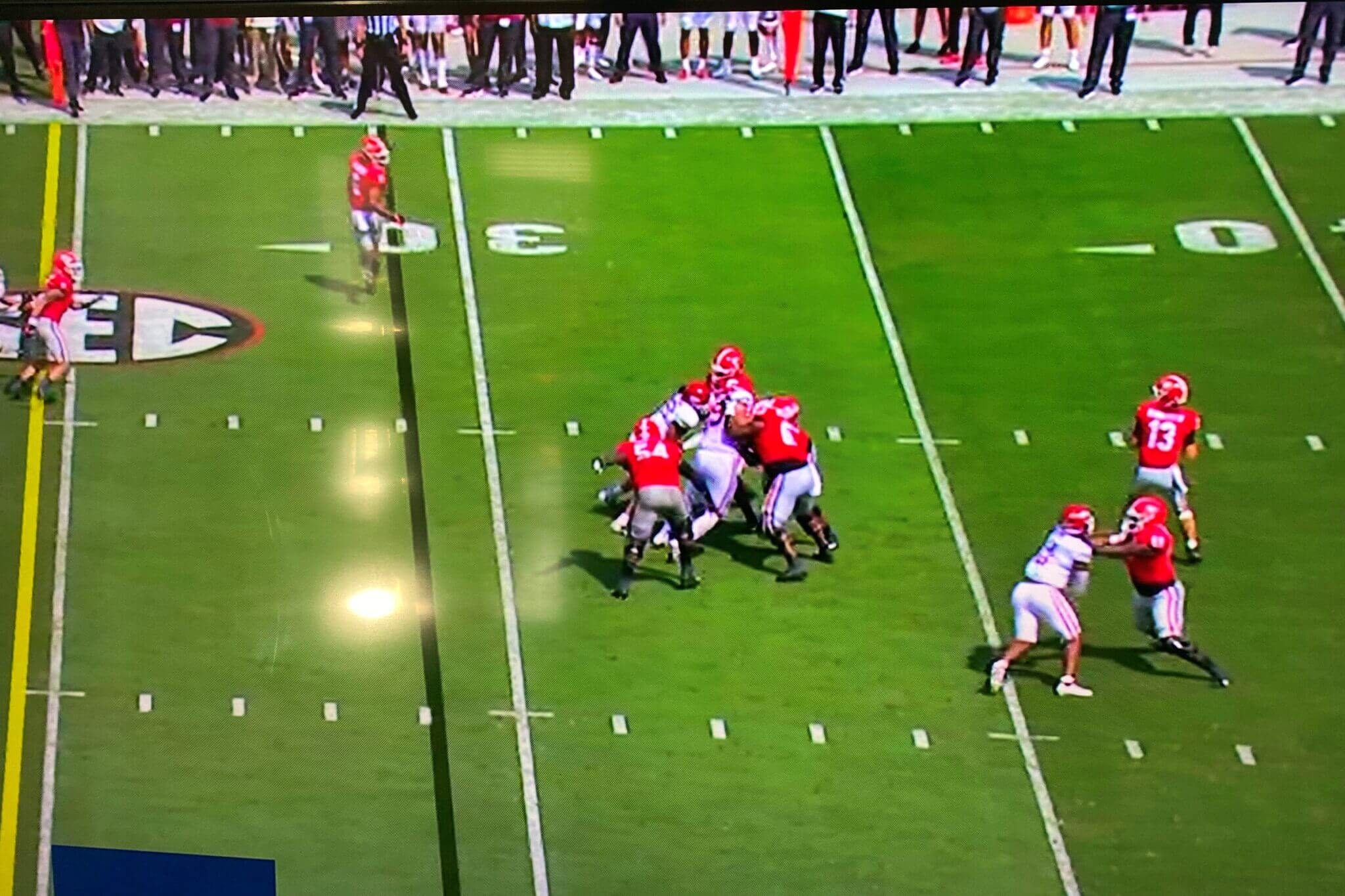 He’s got a clean pocket and Kenny McIntosh in his line of vision, wide open in the flat.  Instead, he chose to force it in to Bowers and almost got picked for that decision.  A little Coxian, in other words.

And I am all here for it.

Maybe for you, buddy.  I’ve got the feeling it’ll carry plenty of meaning for about forty thousand barking fans.

Stat of the day

This would make for a helluva trivia question.

With its 37-0 win over Arkansas, UGA is the only team to have shutout all other teams currently in the @SEC.

Furthermore, UGA has shutout EVERY team who has ever been a member of the conference (i.e., Tulane, GA Tech, Sewanee). pic.twitter.com/6HYwQozK5w

TFW you show up on time

Saturday, somebody forgot to tell the Sanford Stadium crowd that it was a noon start.

#Dawgs Arkansas’s first 2 plays from scrimmage with game sounds only – no commentary. 🔈

That opening series set the tone for the entire game.  It was loud.

Last weekend, the pretenders separated from the contenders.  The conference is two monster teams at the top, one at the bottom and a jumbled mess in between.