How good is Todd Monken?

Stetson Bennett has completed over 3/4th of his throws at 10+ yards downfield this season, a rate even the elite SEC QBs of recent years have been unable to match pic.twitter.com/CMMEphpfrP

I trust the coaches to start the right guy in Jacksonville, so I don’t care who that is nearly as much as I want him to overtake Trask’s 188.41 passer rating from last year’s Cocktail Party.  The sooner I can see those empty teal seats, the better.

Shit, you’d think someone who was the best player development coach in the country would be a lot more positive about the bye week before the Georgia game.  Maybe Spurrier needs to call him for a pep talk.

If you’re in the SEC East and you’re not Georgia, you talk about closing the gap.  It’s what you do.

Kentucky did not defeat No. 1 Georgia in Athens. The top-ranked team in the land looked like the best team in college football. The days of moral victories are long behind Mark Stoops’ program, however, you can see that Kentucky is closing the gap with Georgia, one baby step at a time.

And how do we know this?  Well, for one thing, there’s that meaningless touchdown drive to end the game.

Kentucky refused to give up, finishing the game with a 22-play drive that ended with a touchdown.

Give ’em a couple more months, and UK fans will be claiming that drive was better than winning the game.  Epic, baby.

There’s another reason, though, for shrinkage:

Georgia football fans are about as nice as they come, unless they think their beloved Bulldogs could lose. My previous three trips to Athens were filled with kind words and Southern hospitality. This one was filled with barking Dawgs.

Georgia fans were in the ears of UK fans all weekend. From across the street you could hear “GO DAWGS!” While some were incredibly complimentary after the game, many still did not back down from their harmless trash talk.

College football is a sport defined by inequality. The usual suspects dominate the CFB Playoff so much that expansion is on the horizon. The gap between the best of the best is wide, but Kentucky is inching closer and closer. Even if Georgia fans will not admit it, Dawgs don’t bark at parked cars.

Whatever works for you, man.

I hate to break it to this guy, but he ought to attend a Georgia-Georgia Tech game sometime.  We’ll bark at anybody, parked or even moving in reverse.

Here’s a stat nobody was expecting before the start of the season:

Bowers has six of those by his lonesome.  He isn’t just leading all conference freshmen in touchdown catches.  He’s tied for second in the country in touchdown receptions by a tight end, regardless of class.

By the way, in a similar vein, Georgia placed three offensive players on The Athletic’s midseason Freshmen All-America team:  Bowers, McConkey and Van Pran-Granger.  (Kelee Ringo is on the defensive team.)

Well, that Iowa loss caused me to reboot my entire thought process about the Big Ten.  I’m now back to where I was in the preseason:  Ohio State and everybody else.  If nothing else, that cleared up my Michigan-Michigan State dilemma.

I did add Oklahoma State after they whipped Texas.  The Cowboys are playing some really good defense right now and could very well wind up playing the Sooners in back to back games to finish the regular season.  (And it’ll be hilarious if that totally unnecessary championship game caused a 1-1 finish for both, keeping the Big 12 out of the CFP.)

In the end, here’s my ballot this week:

Less than ten minutes to put together… 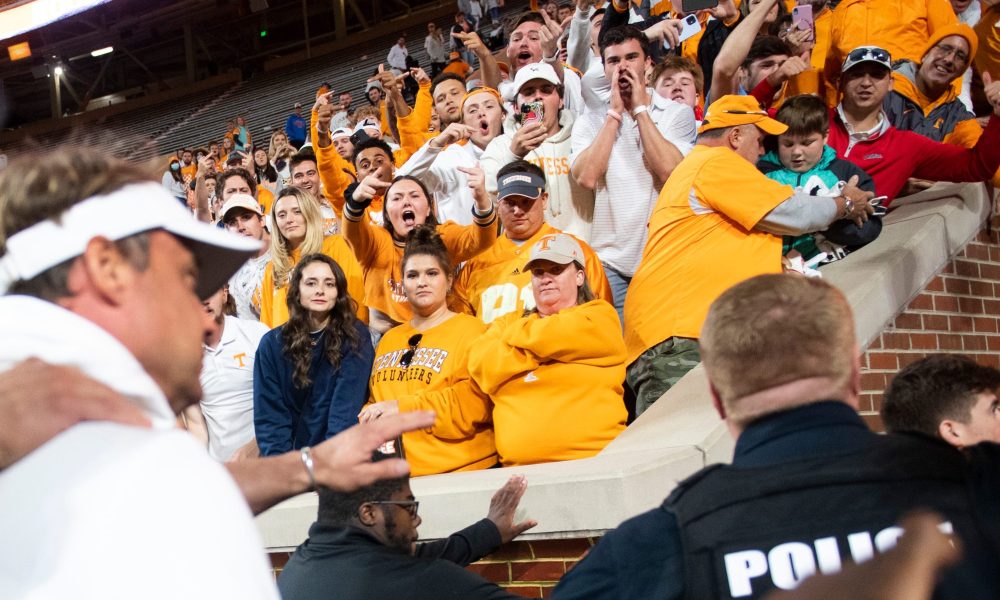 It’s got to be America’s happiest fan base, amirite?

"He can't throw deep."
"He doesn't get the ball out fast enough."
"He only can get through one or two progressions."
"His arm isn't good enough."

I've read all of these criticisms from Georgia fans about Stetson Bennett.

That’s a fun clip to watch, but Dayne Young misses the point about Bennett.  I can’t question his heart.  He’s got enough talent to perform effectively for this Georgia team.  What’s held him back previously is that tendency he has to force things when they aren’t there, which is part of a bigger issue of not trusting his offensive coordinator’s ability to design plays he can succeed with.  Stetson is a much better quarterback this season because he’s finally seen the light in terms of playing within the scheme.  And Georgia is better for that.

I said this the other day in the comments — I didn’t have a problem with Stoops wanting to score at the end of the game last Saturday and using his last time out with seconds left on the clock to set up the final play of the drive.  I did find it more than curious, though, that he chose to do so as the result of a fourth quarter drive that lasted over eleven minutes with his team trailing by 23 points.

His original explanation for that was it provided a teaching experience for his players not to give up in a game.  Okay, although if that’s the lesson you’re pursuing, maybe you should have been more aggressive to start with.  In any event, he came up with a new tactical excuse at his presser yesterday.

He also added that final scores are crucial for voting in the polls and the bowl selection process. A 30-13 final score looks a whole lot prettier than 30-7, and if that’s what separates his team from another, he’s going to try.

And to be blunt, he really doesn’t understand why it’s a conversation.

“They look at the final score, it does matter. They keep score. It matters, it all matters,” he said.

I can’t wait to hear the director of the Sugar Bowl say “what sold us on Kentucky was scoring six meaningless points at the end of a game in which they were dominated by the best team in the country”.  I mean, that’s some inspiring shit right there.

Think I would have stuck with the teaching moment excuse, Coach.

Have you or someone you love been a victim of thrown trash? (cough, cough @Lane_Kiffin) … CALL ME OLE MISS! @OleMissFB pic.twitter.com/RYvQzY4hFa