Remain calm, Gators. All is well.

No UF players will be made available to the media this week. Todd Grantham's Monday availability is cancelled, he won't speak again.

We'll get Mullen on the SEC teleconference Wednesday at 11:20 am. https://t.co/YvZSKMtLhf

Florida football is turning into the living embodiment of this meme: 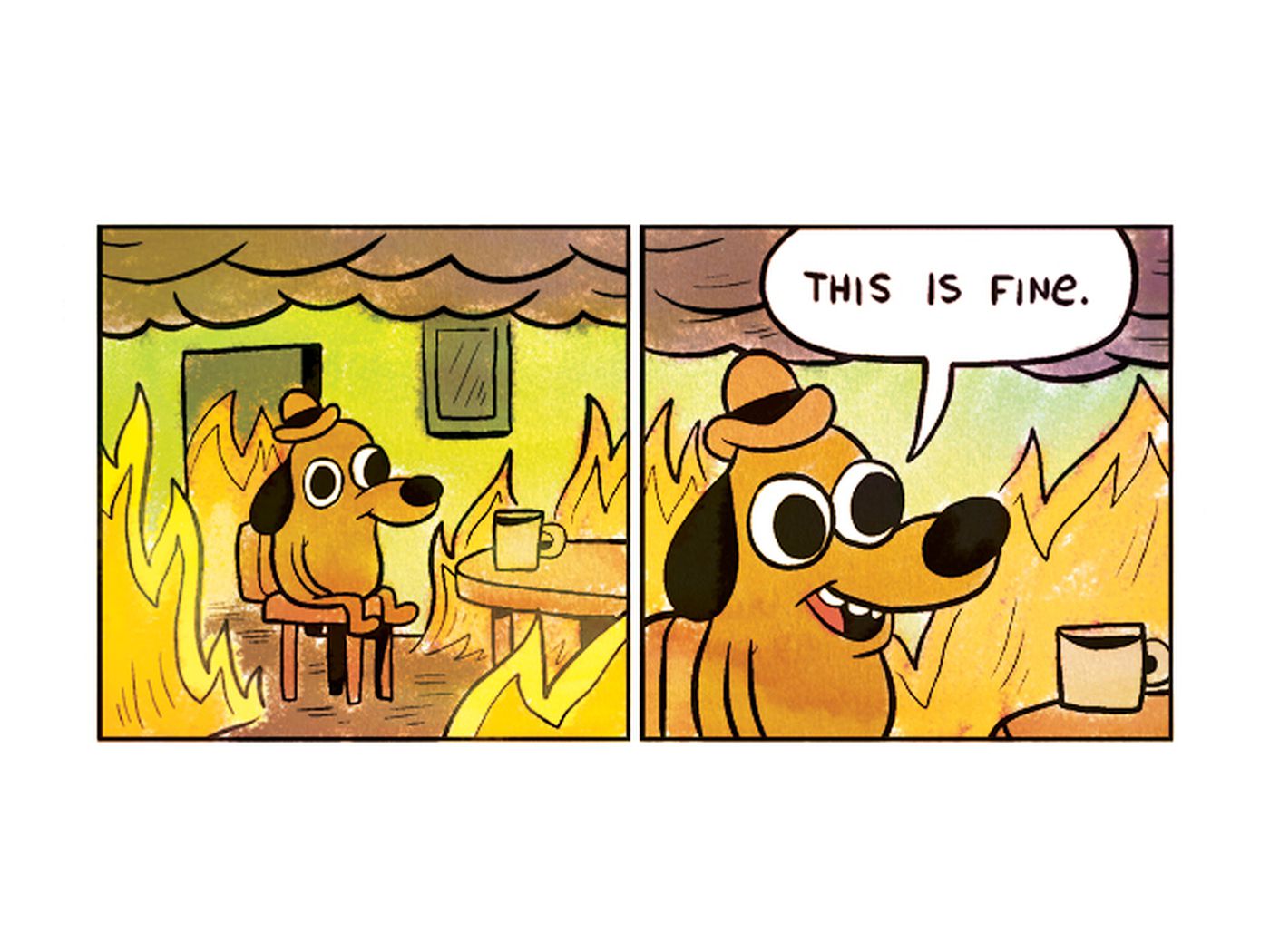 You sure hate to see it.

I could be wrong, but I don’t think this is the best way to close a talent gap.

Kirby Smart after Saturday's game: "If you don't recruit, then you don't have a chance. You should always be recruiting because if you don't, someone else is." https://t.co/9Exs9aW2N6

Back with Brad and Gary

Outgained, but not outplayed

There’s a lot of mockery being thrown Florida’s way — deservedly so — for managing to win the total yardage battle Saturday.  Because of the score, mainly (and obviously), but also because if you dig down and look at yards per play, it’s a very different story.  The Gators averaged 4.80 ypp, almost two yards below their seasonal average, while Georgia gained 6.81 yards per play, just a tick above their seasonal average.

What’s of interest to me is that in their last two games, Georgia’s offense ran its two lowest number of plays this year, 47 against Kentucky and 52 against Florida.  I can’t say that keeping the Dawgs’ offense off the field is a key to beating Georgia, but it might be a key to keep from being badly blown out on the scoreboard.  Or winning the total yardage battle…

Steve Spurrier at UGA-Florida wearing a Duke hat – a disguise, he claims, to maneuver through the tailgate scene around the stadium without incident.

That’s one explanation, I suppose.

As a quasi-follow up to my post about Wolken’s concern about Smart’s starting quarterback decision, I want to ask a question.  Not about Bennett or Daniels, but about what kind of challenge Alabama will pose in the SECCG.

I don’t mean that in a condescending way at all.  But the general presumption is that Alabama’s offense is so formidable that Georgia is going to be forced out of its comfort zone and required to play more aggressively on offense, particularly with its passing game, in order to keep up.

I wonder about that.  In conference play, Georgia, at 39.5 points per game, is second in scoring to Alabama’s 42.4 ppg, about a three-point differential.  On the defensive side, the Dawgs are holding conference opponents to 7.2 points per game.  ‘Bama, at 24.8, is seventh in the SEC.  Counting on my fingers and toes, that’s about a 17.5-point difference.  One of those is bigger than the other.  A lot bigger.

I’m not pretending that football can be reduced to a simple comparative formula.  But I’m also not pretending that Clemson, which, for all its warts, is still seventh nationally in defensive ypp, didn’t play Georgia closer than any SEC team has so far this season.

That gets me to this question:  for all the talk about Georgia not being able to maintain the pace with dynamic offenses, is it possible that the best chance a team has to keep up with the Dawgs is to play stellar defense?  I have no idea, but I don’t think it’s an easy question to dismiss.  With that defense, and at an offensive rate that comes pretty close to Alabama’s average game, how much more dynamic does Georgia have to be, scoring-wise?

UPDATE:  Matt Hayes thinks my question is easy to dismiss.

See where this is headed?

Why should it be automatically assumed the matchups favor Alabama?

“Bennett, for better or worse, is the guy Georgia plans on riding to the finish line.”

I’m not as mortally offended by Dan Wolken as many are, but this is not one of his better opinion pieces.

Without more information, we have to assume that Smart finally had the option to use Daniels — one of the preseason Heisman Trophy favorites — after being out more than a month.

And suddenly, a season of routine, boring dominance has a juicy subplot for Georgia. Is Smart — for the second time in his tenure — boxing himself into playing an inferior quarterback as he pursues a national title?

But make no mistake: If Georgia’s plan was to build its offense around Daniels with the College Football Playoff in mind, that process would have started Saturday in a 34-7 win over the Gators. Instead, Smart made a loud statement by doing nothing.

As we like to say around here, “Without more information” is doing a shit ton of heavy lifting there.  Wolken is making all kinds of assumptions that, for all we know, lack a complete basis in reality.

And he punctures his own argument with this:

It’s hard to argue with that logic based on the scoreboard. Since Daniels’ injury, Georgia has beaten Arkansas by 37, Auburn by 24, Kentucky by 17 (it was 23 until a touchdown in the final few seconds) and now Florida by 27. The Bulldogs aren’t likely to play a truly competitive game until the SEC championship where the likely opponent will be Alabama.

There’s an entire month left to get Daniels prepped.  How much time does he need?  I don’t know and neither does Wolken.  I’m guessing Smart and Monken do, though.

As shaky as that argument is, the piece really goes off the rails with, well, you-know-what.

And now Smart is going to oblige them by not playing the best quarterback on his roster once he’s finally healthy? In the bigger picture, it makes very little sense. For Smart, though, it’s almost becoming a habit.

Oddly, Smart didn’t get a ton of criticism for the situation that developed in 2018 when he played Jake Fromm while Justin Fields mostly sat on the bench. Though it was clear that Fields was the more gifted long-term prospect and came to Georgia as one of the most celebrated recruits in program history, Fromm had taken the Bulldogs to the brink of the national title the year before and never seemed in danger of being dislodged as the incumbent.

Georgia tried to use Fields in special packages, but it felt like he had been pigeonholed as a runner and there was no real commitment from Smart to see what he could do. The end result was predictable: Fromm kept winning most of the games but played underwhelming football, while Fields transferred to Ohio State and became one of the best college quarterbacks of the last decade.

You can spin or rationalize Smart’s handling of that situation any number of ways, but the bottom line is that he made a comfortable decision that did not ultimately give his program the best chance of winning a national championship.

It’s fair to wonder if the same fault lines are developing again in Smart’s thought process.

Ah.  When in doubt, play the Fields-in-hindsight card.  A reminder:  Jake Fromm finished the 2018 season with the fifth-highest passer rating in the country.  If that’s underwhelming, I’ll take underwhelming all day long and twice on Saturday.

Invitation to a hanging

Over at Stingtalk, Tech fan haz a sad about the upcoming game at Mark Richt Field:

It’s nice that we’ve got his blessing to buy their tickets.

I’ve said this before, but I’ll repeat myself so the folks in back can hear me:  there is nothing more enjoyable in life than walking out of Bobby Dodd Stadium after a Georgia win.  Nothing.

Right after the Dean pick-six, I turned to my friend and said, “I wonder if Danielson had a reaction to the throw before the interception”.

PICK SIX!!!@GeorgiaFootball absolutely pouring it on late in the first half. pic.twitter.com/q7A5uoYpva

Siri, what is the opposite of front running?

Once upon a time, Florida had such a great coach.

“Enjoy this, Georgia,” I wrote. “Savor this second consecutive victory over the Florida Gators. Relish your clear superiority over your rivals during Saturday’s 36-17 victory in the World’s Largest Outdoor Talent Discrepancy Party. Every Dog has its day. But your Dog days aren’t going to last as long as you once thought. In less than a season, new Gator coach Dan Mullen has at least put some chomp back in this rivalry after taking over a doomed, done-for, dysfunctional program that completely quit on former coach Jim McElwain during last year’s 42-7 loss to the Bulldogs.

That was then.  Now, Mike Bianchi has a bone to pick with Dan Mullen.

So much for those of us who thought Mullen’s offensive imagination would come up with a game plan to at least keep the game close on Saturday against Georgia’s dominant, dynamic defense. Instead, Mullen’s Gators got a bad case of rope burn in the World’s Largest Outdoor Tug of War Party on the banks of the St. Johns River.

“The rope is slipping right now in this rope pull,” Mullen admitted about his program. “As the rope slips, you can either drop it or grab tight, hold on, dig in your heels and start pulling in the other direction. Dropping the rope doesn’t fix anything. What fixes it is grasping the rope, holding on and squeezing as it’s burning. … We’re not where we want to be, and it’s s on me to get it fixed.”

This performance was embarrassing and exasperating for Florida fans, who watched the Gators get out-played, out-coached and out-talented by the No. 1-ranked Georgia Bulldogs, whose fierce defense turned UF’s previous sensational backup quarterback Anthony Richardson into the confused, discombobulated freshman quarterback that he truly is.

I still believe Mullen is one of the top coaches in the game, but as the great Bill Parcells once said, “You are what your record says you are.”