I guess I’m supposed to feel reassured by this:

Kirby Smart said Georgia had "a little bout" with Covid in the last few weeks, adding:

“Lost some guys, and got most of them back. The biggest thing is getting back to full strength when it matters most, and that’s what we’re shooting for.”

“Most” is doing some heavy lifting there, Kirbs.

Kirby Smart says it bluntly: "Stetson is our starting quarterback." He said whether JT Daniels is "healthy enough" would have a bearing on whether he could play.

“Healthy enough” doesn’t sound like “we prefer Stetson’s mobility”, does it?

Michigan is explosive, and surprisingly so. Eight of its FBS-leading 17 plays of 50 yards or more were runs, and nine were via the pass. But Georgia has given up only five plays of that length this season, and two of them were in the SEC title game against Alabama. As far as more replicable big plays go, Michigan is 58th in passing plays of 20+ yards (42) and 18th in rushes of 20+ yards (24). Georgia leads the country in allowing the latter category (3) and is sixth in the country in the former (28). However, Alabama lays claim to seven of the 20+ yard passing plays that Georgia has allowed this season.

Michigan is good.  Michigan isn’t Alabama, at least not on offense.  Both of these things can be true at the same time.

On defense?  Well, that might get a bit trickier.

Dropping players into throwing lanes up front is one way to change up the picture post-snap on a quarterback. Another is to rotate in the secondary, which Michigan does about as often as Alabama does as far as snaps rotating from two safeties high pre-snap to one safety high post-snap. That will come into focus against the Georgia quarterback.

“Stetson Bennett to me is very instinctive,” Alabama coach Nick Saban said after the SEC championship game. “If he knows what the picture is, that’s when he made plays and several big plays. So, I think changing the picture on him a little bit helped.”

How much Michigan can effectively re-create the Alabama game plan?

The gap between Alabama and Michigan

Like it or not, Herbstreit’s pretty accurate with this observation:

On Monday, Herbstreit was asked a number of questions during a conference call with reporters, including about whether or not Michigan can do what Alabama did to Georgia in the SEC Championship game.

“It wasn’t just the scheme,” Herbstreit said. “It was two players. It was Bryce Young and Jameson Williams, I mean you’re talking about two of the elite players at their positions one won the Heisman trophy and the other one, you could have made an argument had a good enough year to be right there to win it as well, but he’s on the same team.”

Michigan is a formidable team, but there’s formidable and then there’s a level above formidable.  And there is no Young or Williams on the Wolverines’ roster.

“So you’re talking elite players,” Herbstreit said. “The one question on Georgia before the game, in fact, we talked with Dan Mullen, the former Florida coach, on game day that morning. One of the segments we did was Georgia secondary. Whether or not, if this Georgia front, which has been dominant all year, if they don’t get home or Bryce Young is able to create, how good are they really on the back end? We just haven’t seen them tested. And that ended up being, as we know, a big part of how that game unfolded was what happened in the secondary.

“I’ve gone back and watched that game probably six or seven times. I don’t think it’s fair to put it all in the secondary. I think the front looked fatigued, for whatever reason, they didn’t have the same juice that they played with most of the year.”

The question is, then, do you need elite players to expose Georgia’s defense?

“But I don’t think Michigan has an offense that necessarily you can just draw up a play or a sequence of plays and say ‘okay we’re going to be in a good spot to run the exact same offensive scheme that Alabama did. Hey, Alabama gave us the blueprint let’s just do exactly what Bama did.’ Just because that’s not their identity.”

Herbstreit says UM’s identity is running the ball mixed with enough trick plays to keep a defense honest.  Will that be enough?  I don’t know, but I sure think I’d rather take my chances with Young and Williams.

When in doubt, blame the transfer portal.

Since November, Hawaii has seen 12 players, including a half-dozen starters and two out of three captains, jump into the transfer portal.

You might think that was driven by players thinking head coach Todd Graham is a dick (to be fair, they’re not the first bunch to feel that way about Graham).

Multiple current and former Hawaii players are speaking out and alleging mistreatment and abuse at the hands of head coach Todd Graham, according to a report from SFGate.com’s Marc Delucchi.

Hawaii players who played under Graham alleged Monday that he is running a toxic program in which he demeans and verbally abuses players and coaches and ignores them completely.

Last week, leading rusher Dae Dae Hunter announced he was transferring, as he felt it was “best for my future and my mental health.” Starting quarterback Chevan Cordeiro followed suit.

“Me and a lot of others can truthfully say Graham has killed our love and passion for football,” one player told SFGate on the condition of anonymity.

Given how much Graham’s jumped around during his career, maybe it’s understandable that he’d try to chalk up the same mindset for those departing players.  But what it really illustrates is that if you’re a head coach who can’t adapt to the times by recognizing that players have options now they didn’t have before, you’re not going to have some of those players stay.  Or, in Hawaii’s case, a lot of those players.

The program’s record has been in decline since Graham’s arrival and that kind of turnover isn’t likely to arrest the trend.  Especially when the head coach has to answer questions about his behavior on the recruiting trail.

I don’t think it’s exactly a state secret that Stetson isn’t at his best when he’s facing defensive pressure.  Here, for example, is a chart Josh put together comparing the two quarterbacks who face off Friday night. 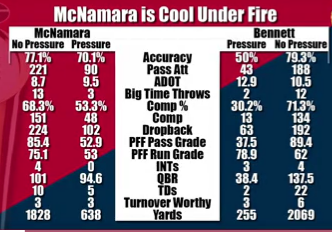 Sure, it’s reasonable to expect some drop off in performance, but Stetson’s drop off is more like a cliff than is McNamara’s, particularly with regard to completion percentage.  Completing 30% of your attempts is pretty much a ticket to a bunch of three-and-outs.

The good news there is that Monken did a good job keeping Bennett out of those situations, for the most part, all season.  Only 18.6% of his plays came in pressure situations.  (Not just passes, either.  Note that his PFF run grade actually improved under pressure.)

By comparison, McNamara took about 30% of his snaps under pressure.  But his accuracy and completion percentage didn’t drop as precipitously as did Bennett’s.  In addition, he didn’t throw an interception in those circumstances.

Yes, Alabama was an anomaly in that Bennett was forced into a higher percentage of pressure situations than had been the norm, with the expected result.  A lot of that was dictated by the circumstances of the game getting away from Georgia on the defensive side.  In other words, there’s only so much Monken can do to minimize the weaker part of Bennett’s game.  Georgia simply can’t afford another game where it has to chase a two-score opposing team lead.

“I’m not surprised we’re circling back to quarterbacks.”

In all of Todd Monken’s talk yesterday about why the coaches settled on Stetson Bennett as the starter, I’m sort of curious why there hasn’t been more said about the implication of what was offered as the primary reason for going with Bennett over Daniels: ($$)

“You know, I think Stetson at times — I’m talking about me, (I) have probably undervalued his skill set,” Monken said. “Some guys just combat that and fight and scratch and continue to play well and try to prove you wrong, and that’s what Stetson Bennett did. It wasn’t really anything JT did, it was more along the lines of what Stetson did that we thought gave us the best chance to win, his mobility, those things, in the run game and the pass game when things break down we believe give us the best chance to win.

So, here’s my question about that — if the o-line were more trusted by the coaches to block well, particularly in the run game, would there be the same need to start Stetson over JT?  And if that’s the case, what does that say about the state of the offensive line?

Envy and jealousy, in less than 280 characters

Stetson Bennett: “I wouldn’t listen to myself giving a lecture on heart surgery, so why would I listen to someone who doesn’t do [football] for a living? I don’t have social media. I don’t wallow in it. I don’t think about it. All I’m thinking about is beating Michigan."

Dana Holgorsen has fewer fucks to give than any coach in America.

Yesterday, his team beat Auburn and he had to go second behind Harsin at the press conference afterwards.  That didn’t sit well.

Dana: “We win the game and I’m just standing out there for 20 minutes, I don’t quite understand that. I’d get that together.” 💀pic.twitter.com/b7DiZWI78X

He also yelled hurry up during Bryan Harsin’s conference from outside the door. https://t.co/TDWzTdDEVQ