ACC commissioner Jim Phillips: "The membership of the ACC is very much aligned in its position that now is not the time to expand the College Football Playoff."

There you have it.

ACC's concerns regarding CFP expansion include health/safety, length of the season, academics and the NCAA environment. Jim Phillips says he thinks leaders should be focus on reforming college athletics (NIL, transfer portal, etc.), not adding teams to the CFP two years early.

I feel something of the death row inmate who gets a last-minute reprieve from the governor.

Thanks, Jim!  Oh — take your time hashing out those more pressing issues.  Sounds like they could take the better part of a decade to solve.

I don’t know if you caught this scene after Georgia’s win Monday night, but it’s pretty cool.

This job ain’t easy and your path was harder than any of us before you. So proud of you brother! The GOAT! #godawgs pic.twitter.com/4CgRCbMket

With all that weight on his shoulders, no wonder Stetson had to work so hard to win that game.

Recruiting metaphor of the day

That’s how one team caps off its postseason with a national championship and the other loses a bowl game to Army.

You know what this means.

On Monday, Georgia won its first national title since 1980, which was watched by an average of 22.6 million viewers.

The good news for ESPN appears to be that ratings for Georgia’s 33–18 win over Alabama were up from last season’s title game. However, that matchup between Alabama and Ohio State produced the worst ratings of the playoff era with an average of 18.6 million viewers.

Save us, expanded playoffs!  You’re our only hope.

College football overlords are telling themselves that (so is ESPN) while conveniently ignoring recent history.

The inaugural CFP national championship in 2015 between Oregon and Ohio State still holds the record for the highest viewership of the playoff era with an average of 34.2 million viewers.

Guess what?  Those shiny new toys lose their shine.  Meanwhile, the regional passions that have fueled the sport for decades remain strong.

Naturally, that means the idiots running the sport think the future is in watering down the postseason even further.  I’d put up the “Bold strategy, Cotton, let’s see if it pays off for ’em” gif here, but I think we already know.

“I know people don’t understand it, but other teams are 10 days up on you because they finished Jan. 1, your competitors. And you’re going, wait, they’re doing what? We’re trying to win a national championship,” Smart said Tuesday morning. “Fortunately, I had a really good mentor, teacher of dealing with that because he’s in it every year (in Nick Saban). But you fall behind because you’re trying to manage your roster.”

Jesus H. Christ on a bicycle…

Oregon defensive end Kayvon Thibodeaux did an interview with FOX Sports’ Joel Klatt during the 2022 College Football Playoff national championship game Monday. Thibodeaux discussed attending Oregon over Alabama, and he had some things to say about the supposed quality of education at both institutions and why he chose the Ducks.

Later in the interview, Thibodeaux continued to talk about an Alabama education.

“If I would have went to Alabama … I don’t know if my degree would mean anything,” Thibodeaux said.

Dude, you’re leaving school early to make millions in the NFL.  Who cares what your college degree means?

Welp, I guess this guy does.

ESPN college football analyst and former Alabama quarterback Greg McElroy took offense to Thibodeaux’s statements. He discussed it for quite a while on his radio show with Cole Cubelic — “McElroy and Cubelic In the Morning.”

“I just take real personal offense, man,” McElroy said Thursday. “I genuinely do. I don’t care. Don’t come. If you think so little of us, don’t come. Fine by me, because I know the people that live in this state. I chose Alabama, because I love Alabama. … If you don’t want to see Alabama for the greatness it can potentially provide you, it’s on you. You’re missing out.”

Cubelic and McElroy both chastised Thibodeaux for saying “stigmatism” when he meant “stigma.”

“He says he doesn’t like the stigma that athletes are dumb jocks, and yet, he sounds like a dumb jock,” McElroy said.

McElroy played quarterback at Alabama from 2007-10. The New York Jets took him in the seventh round of the 2011 NFL Draft.

“What I don’t understand is why he felt the need to cut down Alabama,” McElroy said. “And as someone who has always taken his academic situation very seriously, I’ll just come at him with this — if he’d like to take an IQ test, I’m available. If he’d like to take the Wonderlic test, I’m available. As a proud graduate with multiple degrees from Alabama, I will put my degree up against his any day of the week.”

I repeat:  Jesus H. Christ on a bicycle.  Dueling IQ tests?  Seriously?  If I were Kayvon, I’d offer to match bank accounts with McElroy after the NFL draft.

I don’t know about those two, but I feel dumber after taking all that in.

No tiebreaker this year, peeps.

And with that, the Fabris Pool goes into hibernation for eight+ months.  See y’all next season.

This Georgia team had it in spades.  Example: 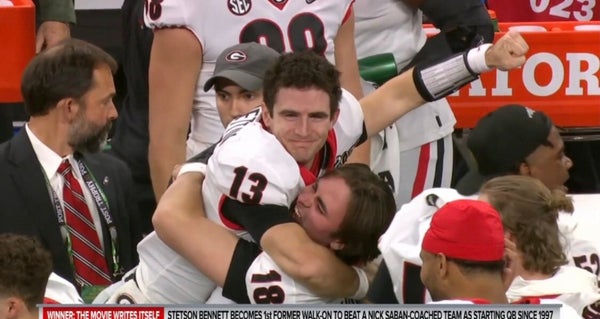 It would have been easy for JT to react publicly to holding down the second chair, but to his credit, he never did.

When one door opens, another one closes.

One thing about Kirby Smart…

This is cool: Kirby Smart to Dan Lanning after the game, "Love ya, Dan, have to remove you from the staff thread." That's how it ended. (Source: Dan Lanning) @GeorgiaFootball @oregonfootball

He will always sweat the small stuff.