And now, a word from Bryan Harsin’s sponsor

Auburn president Jay Gogue: “I just want you to know we’re involved in trying to separate fact from fiction. We’ll keep you posted and make the appropriate decision at the right time.”

Sheesh.  Not exactly the proverbial vote of confidence there.

Also happening at Auburn today. The school just named Dr. Christopher B. Roberts as the next president. He will be facing what the former president characterized today as a "decision" on the future of football coach Bryan Harsin. Harsin is on vacation and not in town. https://t.co/iihhIFv2No

Helluva first day you got yourself, Dr. Roberts.

Lee Hunter's post has been liked by 19 players from Auburn's 2021 roster.

And eight of those are on Auburn’s 2022 roster!

A fence with a southern gate (that only opens one way)

In lieu of an exhaustive reasoning for every state winner, we’ll pick eight particularly interesting states and break down their recruiting battles.

The Dawgs are building upon their first national championship in over 40 years with a tremendous recruiting class. This is not a terribly surprising result given they just won the national championship and UGA has won the state nearly every year since Kirby Smart took over as head coach. The only exception was in 2020 when LSU got a commitment from five-star recruit and top GA prospect Arik Gilbert, who has since taken a circuitous route to end up with UGA anyway. What’s more noteworthy is the lead UGA has built up over other schools, and how this has reversed a recent trend for them. 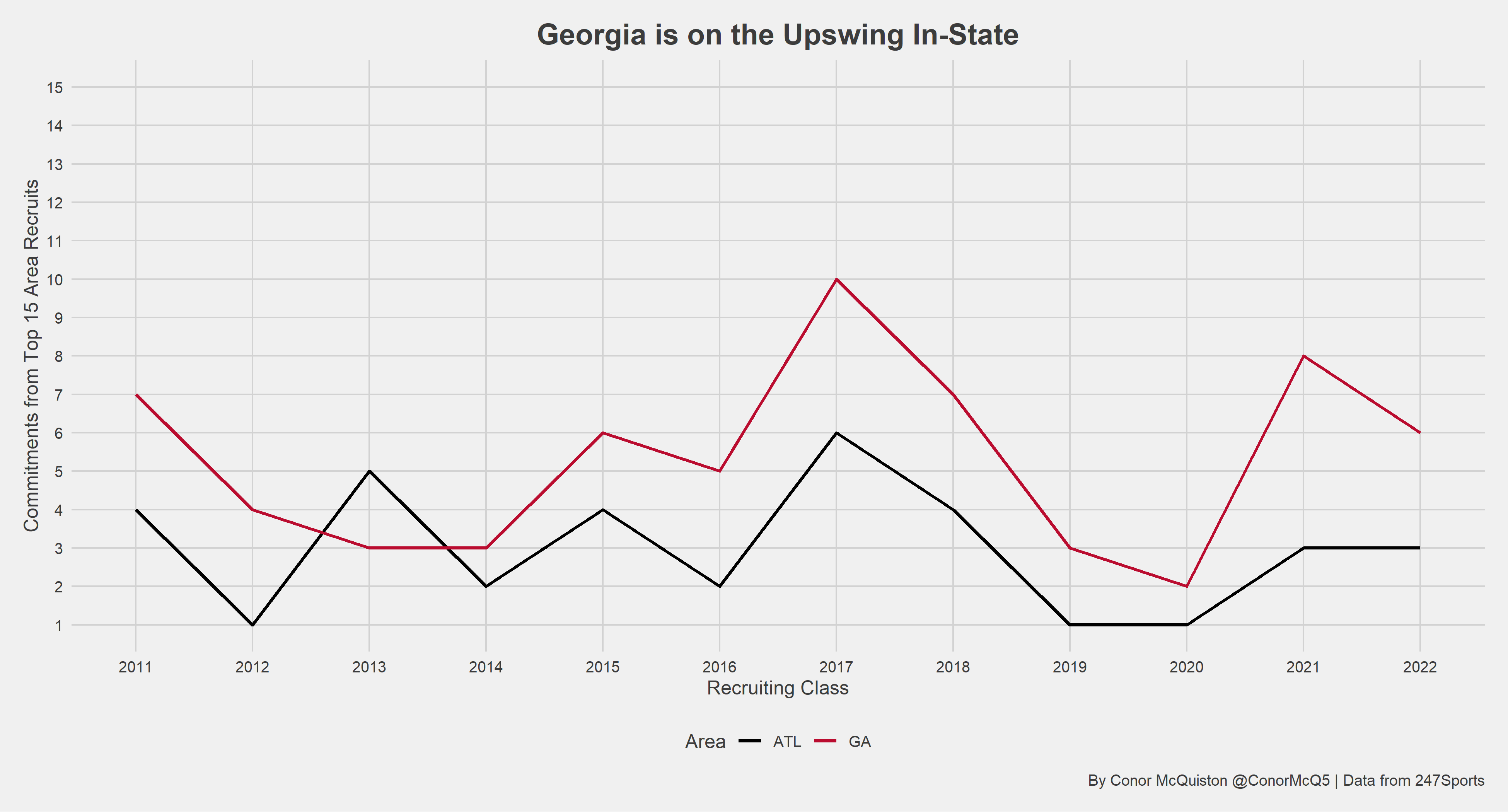 After exploding onto the scene with an astounding 10 top recruits in the state during his first cycle in 2017, Smart’s lead within the state gradually diminished until bottoming out at only two in 2020. He reversed this trend in 2021 with a strong in-state showing and has rolled this momentum into the current class. Another encouraging point: They are not reliant entirely on Atlanta, the Southeast’s most centralized and thus competitive pool of talent, for this talent.

Atlanta is one of the most competitive individual cities in America, alongside Los Angeles, Miami and Dallas-Fort Worth, and thus any plurality gained in the city would likely only result in a handful of recruits. In other words, since UGA’s 2021 and 2022 Georgia classes are composed of less than half Atlanta recruits, this may imply that they’re doing a better job forming connections with more rural, harder-to-access high schools. This could be a boon for them as it could help keep a healthy supply of in-state talent into the program even in years when a strong plurality is not struck inside Hotlanta.

I’m waiting for some idiot on Stingtalk to brag this means Smart’s afraid to go toe-to-toe with Coach 404.  In any event, Smart’s getting top kids to Athens from all over the state of Georgia.

Oh, and that gate I mentioned?

Florida is one of the three most talent-rich states in the country, along with California and Texas. Every program in the FBS wants “Florida Speed” on its roster, and each of the state’s “big three” programs (Florida, Florida State and Miami) have won multiple championships off the back of in-state talent.

You wind up as top recruiting dog in those two states and you’re gonna have a pretty solid roster to work with.

“Welcome to the first athletic board meeting after a football national championship.”

As Weiszer’s tweet indicates, the board was in a spending mood yesterday.  And with good reason:

Not surprisingly, Georgia athletics also is ahead of pace financially for the 2022 Fiscal Year. That’s thanks in part to $34 million in football ticket revenue, which does not include the Bulldogs’ sales numbers from the postseason. Treasurer Ryan Nesbitt reported a total of $70.2 million of unrestricted net assets for 2022.

Chunking all that new change in the reserve fund?  Not today, Satan.

UPDATE:  There’s some other news on the financial front.

The first thing we do, let’s portal all the lawyers.

When it comes to the transfer portal, this is the $64,000 question:

“We’re not doing away with the portal. It’s here to stay,” says Shane Lyons, athletic director at West Virginia and the chair of the Division I Council. “But how do we modify it legally?”

The NCAA is essentially paralyzed.

In such a litigious climate and amid an athletes rights movement in the sport, restricting players’ access to transfer could result in more legal challenges for the NCAA. In fact, in creating the portal, officials previously discussed implementing activity periods but ultimately decided against it for legal concerns. The NCAA’s legal team continues to explore the issue, Lyons says.

Which is a little weird, because even lawyers who are on the opposite side think there’s a need for some degree of regulation.

“Maybe players aren’t going to like it, but on the surface it sounds like a good idea to me,” Mars says. “If I get any calls from players or parents unhappy that the NCAA has created these windows and they want my help, I’ll tell them to call someone else. I don’t think they would have a leg to stand on.”

“You’re not inhibiting them from exercising their legal right,” he says. “You’re creating structure within the transfer process.”

It would be a conflict of interest for him to accept, but were I running the NCAA, I’d just hire Jeffrey Kessler to devise such a structure.  Find someone of his ilk who doesn’t have a representation problem to fix it, then.

Filed under See You In Court, The NCAA, Transfers Are For Coaches.

Russ emailed me with a request I thought I’d share:

Could you have a post for people to request NC and playoff swag? I’d love to find a good quality photo of Ringo snagging the INT with Kirby jumping in the background. Maybe people could also talk about other mementos they found from the games. I need to find out if there’s anything out there I HAVEN’T bought yet. LOL!

I think y’all know what to do in the comments.

I’ll start the ball rolling by asking if anyone knows where to score one of those white Nike jackets the team sported for the national championship celebration.  I’ve looked on the intertubes, to no avail.  Help a blogger out.

Here’s a really nice graphic illustrating which schools overperformed and which underperformed with their 2022 classes, compared with recent history.

Yeah, yeah, Texas A&M.  What’s impressive to me, though, is that even though they finished behind the Aggies this time, both Alabama and Georgia managed to better the average of their recent signing class scores.

And, following up on yesterday’s post, look at the results for Kentucky and Missouri, then compare that with Florida and Tennessee.  One class and that’s not a big deal.  If it’s the start of a trend, though…

Auburn is the Beyond Crompton of dumpster fires.

My Gawd.  All this in less than a day.

“Based on what I’ve gathered, Austin Davis was unfit for the position and was going to be relieved of his duties if he didn’t step down.”

From PM: Will Bryan Harsin be Auburn’s head football coach next week? That’s an open question as of late Thursday night.

Off-field issues, more than Harsin’s 6-7 record and five consecutive losses, apparently led to the administration taking a hard look at Harsin and his program. Almost two dozen players have left the program via the transfer portal. He has lost half of the coaching staff he hired earlier this year. He did not sign a player on national signing day. There have been accusations of verbally abusive treatment of players, coaches and support staff.

It is uncertain when a decision will be made or made public.

Canning a coach after one season is both stunning and also prototypical behavior for the folks on the Plains.  The times being what they are, I’m sure the boosters and administration are looking for anything they can hang their hats on as a justification to fire Harsin for cause.  And there are several juicy rumors already circulating that I’m not going to dignify by mentioning here.

Instead, I’m trying to figure out how low the Barners will go with the next man up.  Hugh Freeze?  Urban Meyer?  Jeremy Pruitt?  Dan Mullen?  (I’m leaving Bobby Petrino off because I think that particular rose has lost its bloom.)  This is a school that just gave a lifetime contract to Bruce Pearl, so clearly they have no problem holding their collective noses if they believe there’s significant upside.

Shit, where did I leave that popcorn bag?

I have to admit I didn’t have this square on my bingo card.

So, Boom is out of Saban’s coaching tree and Saban’s now got four assistants who are out of Boom’s coaching tree.  It’s like the coaching tree that’s swallowed its tail, if I may be allowed to mix metaphors for a moment.

And Joe Cox?  It’s a shame Saban doesn’t let his assistants speak publicly, because I would pay good money to hear Cox at a presser explain some bad throw by Young with a variant of “I kind of saw Norwood and was like, hmmm, but I decided to throw it anyway…”.

Boy, I know it’s Nick Saban, but this seems like a moment just begging for a certain meme…