Okay, who let the lawyers in?

Seriously, this is what you get after Kevin Ollie’s attorneys kicked UConn’s ass in arbitration to the tune of $11+ million:

Auburn University has released a statement on the Bryan Harsin situation: pic.twitter.com/ddVqGPRWXi

The idea that Auburn is going to fire Harsin, try to withhold some of the buyout money and not face a lawsuit in response is delusional.  Then again, this is Auburn we’re talking about.

Filed under Auburn's Cast of Thousands, See You In Court

Your Daily Gator grasps at straws.

The Gators were 4 plays away from 10-2 this year with a coach and staff that didn’t try to win 😂😂😂 and people act like we’re legit Missouri or Vandy.

They’ve gone from sounding like us during the Spurrier era to your typical Stingtalk poster.

Auburn: a tradition unlike any other

Would someone capable of competing with Smart, Alabama’s Nick Saban and Texas A&M’s Jimbo Fisher take a chance at a school with boosters who have been tearing down coaches since 1998?

It’s not the woman.  It’s not going through assistant coaches like Kleenex.  It’s not even alienating so many players on the roster as to cause a traffic jam at the transfer portal.

“He doesn’t work in recruiting,” a longtime SEC assistant said. “He thinks he’s going to outcoach people. That’s not going to happen in the SEC — those other guys can coach and recruit.”

That an SEC head coach would take Dan Mullen as a role model after the events that have transpired in the last six months is pretty head shaking.  Hell, in some quarters, it might even qualify as cause for firing.

What a difference a season makes.

College football’s chicken-egg argument is this: Is it more important to recruit better raw talent or more important to develop the players you sign? The answer, if a team wants to win national titles, is that it’s critical to do both. That’s what Alabama, Clemson and Ohio State do, and that’s why those programs have won five of the past six national titles. But in the case of Florida and Georgia, the Mullen staff seems to be superior in terms of development and the Smart staff seems to have the edge in recruiting. In truth, each will have to get better at the other aspect for their programs to frequently compete for national titles, but Saturday will provide an answer for what matters more in the present. A win by Florida is a victory for the chicken, while a win by Georgia amounts to a victory for the egg…

No one is getting fired this time unless things get truly odd, but the result of Saturday’s Cocktail Party certainly could alter the trajectory of one of the coaches in the rivalry.

… Mullen kept winning on the field thanks to some special players he inherited — quarterback Kyle Trask was already on the roster and tight end Kyle Pitts had committed to Jim McElwain’s staff before it was fired — and that obscured the fact that with every recruiting cycle, Mullen’s Florida fell further and further behind Kirby Smart’s Georgia. Then it came to a head in 2021 after Trask and Pitts moved on to the NFL. Smart won the national title.

Mullen got fired in part because he helped point out the glaring difference between his attitude toward recruiting and Smart’s attitude toward recruiting with a bizarre freak-out about a benign question the Monday after his team lost to Smart’s Bulldogs. Mullen didn’t seem to understand that his job as Florida’s coach was to win the national title, and landing top recruiting classes is one of the basic requirements.

That 2020 Cocktail Party win turned out to be the biggest piece of fool’s gold in the history of Florida football.

I don’t know whether this is amusing or pathetic.

A couple dozen Auburn fans, and more trickling in, are gathering at Toomer’s Corner for a rally in support of Bryan Harsin, whose future as head coach remains up in the air. 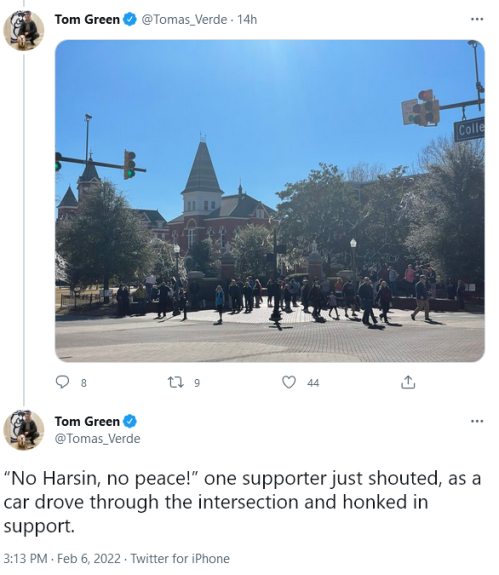 Yeah… think I’m gonna have to go with pathetic here.

Could be a big day at Auburn. Whispers this morning that a resolution could come today.