Hmm… I guess we won’t be the only ones checking G-Day QBR this year.

Stetson Bennett is expected to begin the season as the quarterback for the Georgia Bulldogs, but ESPN’s Paul Finebaum isn’t convinced quite yet. Bennett led Georgia to a national championship last season, and then decided to come back for another season. Now, Bennett needs to continue playing well in this weekend’s spring game to keep a hold on the starting Georgia quarterback job.

Finebaum said that if Bennett plays poorly in Georgia’s spring game, it could create a lot of questions for Kirby Smart in the Bulldogs quarterback room.

“It’s Georgia. I’m really curious about the quarterback situation,” Finebaum said. “I know that there will be a lot of blowback, but I continue to worry for Stetson Bennett. He had the storybook ending, he decided he wanted to come back, and I have my doubts whether this will be a vintage season for him just because of a number of circumstances. So yeah, I’m watching that because if he stumbles in the game and Beck or another player look really good, then I believe that debate will start and create angst and anxiety for Kirby Smart in the offseason.”

If Stetson needs to feed that chip on his shoulder, it sounds like he’ll have plenty of sources for that.

To follow up from what I said I’m not worried about when it comes to Georgia’s offense, here’s a chart from Josh that nicely illustrates that: 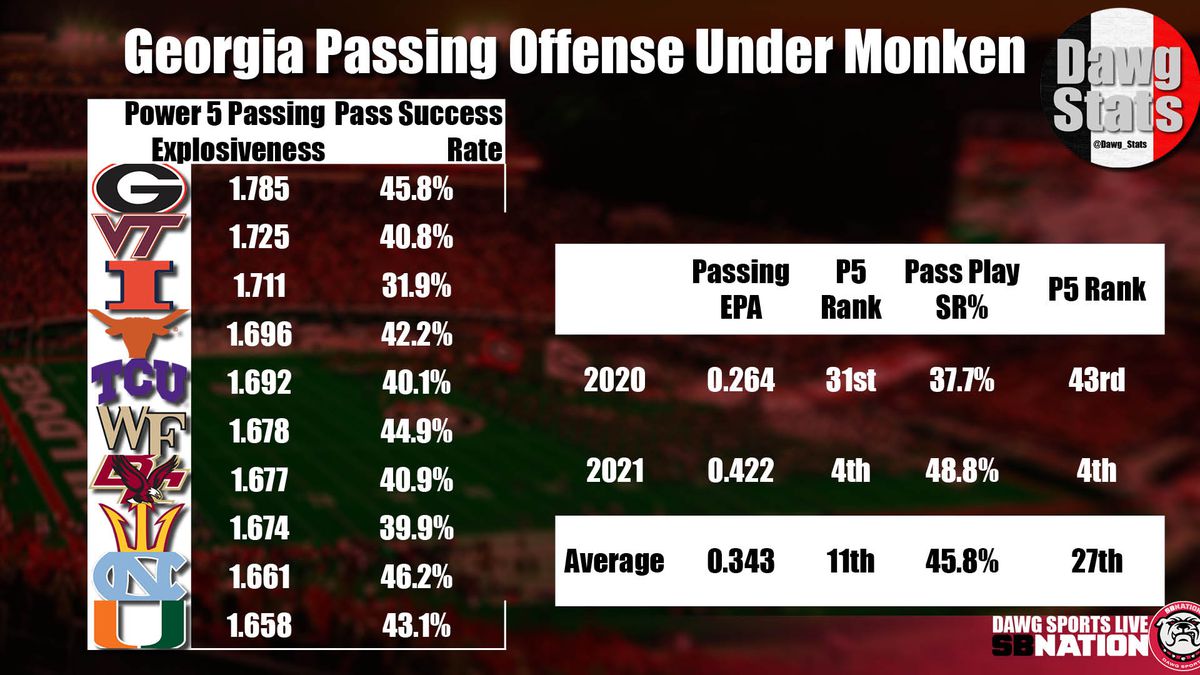 And keep in mind that Monken’s operated under a handicap in his first two seasons:  2020, when he had to install a new offense under pandemic conditions and a quarterback shuffle; and 2021, when he had to deal with skill position injuries, again, particularly at quarterback.  A third year with a little more stability?  I’m kind of excited to think about the possibilities.

Georgia hoisted the College Football Playoff National Championship trophy late in the evening on Jan. 10 after topping Alabama 33-18 to celebrate its first national title since 1980. Coach Kirby Smart celebrated, players danced, fans cried and the biggest party Athens has ever seen kicked off in earnest.

In reality, however, that night marked the beginning of Smart’s toughest challenge ahead as leader of the Bulldogs football program.

There have been some remarkably average to slightly above-average coaches who have won national championships. LSU’s Ed Orgeron (2019), Auburn’s Gene Chizik (2010) and Larry Coker (2001) are just a few that come to mind. Others, like Alabama’s Nick Saban, Clemson’s Dabo Swinney and ex-Ohio State coach Urban Meyer sustain success at an elite level.

So now the question is: In which category will Smart land?

I am not so presumptuous as to presume Smart has elevated himself into the ranks of college football’s immortals based off last season’s success, but, man, comparisons to the likes of Orgeron, Chizik and Coker seem strained.  The first two landed generational talents at quarterback out of the blue and the latter was handed what might have been the best college football roster ever assembled after Butch Davis took off for the NFL.

So while I have no idea what’s in store for Kirby Smart, I’m pretty damned sure being labeled “the next Gene Chizik” isn’t in the cards.

UGA QB Truthers® are back pic.twitter.com/qJRxLunjXA

I can’t speak for anyone else, but if I had to choose between fretting over Stetson being the starter or Monken being Georgia’s OC, it wouldn’t be much of a choice.

This is pretty funny.

5 star WR in the class of 23 [Johntay Cook II] on his recent visit with the Texas A&M Aggies.

True, but it’s nothing Jimbo can’t fix with a bigger NIL check.