TFW the numbers check out

WF coach Dave Clawson told me he thinks the avg program is losing 12-15 players in the portal, which is why there's strong support from coaches to scrap the 25 initials and allow them to get to 85 as they can. "The numbers don't work if you're allowed to sign 25 a year," he said.

I guess we’re not following an average program.

Filed under Georgia Football, Transfers Are For Coaches.

That which does not kill them makes them Auburn.

Whistling past the proverbial graveyard, or nah ($$)?

Bryan Harsin and his program were well aware of the noise surrounding the program this offseason. At its peak, it was deafening.

But they believe it strengthened those who remained inside the building.

“From the outside looking in, you’d probably think the house was on fire,” said linebacker Owen Pappoe, a three-year starter who’s returning from an injury-plagued 2021 season. “But honestly, man, we’ve been fine. Just trying to control what we can control. Rumors are rumors. People will go online and say whatever, but all that matters is what we have going on inside.”

Salacious rumors surfaced, and before spring began, Harsin’s job status was in doubt amid a university investigation.

Cool, cool.  If my Internet skills were better, I’d impose the Auburn Tiger logo over the dog in that “this is fine” gif and post it here.

“Many of the decisions we will make here over the next 6-12 months will impact college athletics for the next 25-30 years,” Big Ten commissioner Kevin Warren said. “Because of that, we need to be thoughtful. The worst thing we can do is rush into this.”

Additional NIL guidelines, which the NCAA working group are currently finalizing, are expected to help regulate these deals that officials say are encouraging current players to remain on their teams and inducing recruits to sign with their schools, a developing situation Sports Illustrated detailed Monday. On Tuesday, SI reported on the impending release of the guidelines, which could happen as early as next week. George and Ohio State athletic director Gene Smith, also on the working group, confirmed the existence of the draft of guidelines.

The guidance clarifies existing NCAA bylaws that prohibit boosters from being involved in recruiting. Any booster or booster-led collective that has been found to have associated with prospects about recruiting—on another college team or in high school—will be found to have violated NCAA rules and put the booster’s school at risk of sanctions, George says. In addition, a booster, or booster-run collectives, “cannot communicate with a student-athlete or others affiliated with a student-athlete to encourage them to remain enrolled or attend an institution.”

Officials reveal to @SINow more specifics on new NIL guidelines that are expected to publish next week.

It’s retroactive. Schools with boosters who have communicated/struck deals w/players who haven’t yet signed with schools should be sanctioned, ADs sayhttps://t.co/b0jUB8UPF0

The question I’ve got is whether the NCAA is dumb enough, after all this time, to penalize the athletes over this.  If so, there are going to be a lot of happy lawyers.  If not, we’ll find out who wins the War on Boosters.

A primer on tampering

There are a bunch of examples in this piece about how to push the envelope without going over the line, but I think all you probably need to know is contained in this one handy quote:

“Some schools are better at tampering/NIL stuff because they’ve been doing it for years,” the source said. “It’s just legal now.”

Filed under It's Just Bidness, Recruiting, Transfers Are For Coaches.

TFW the NFL **is** your friend

Then again, if you want to use the NFL draft as a benchmark to judge whatever Kirby Smart is doing in Athens, this is one helluva sales point ($$):

… Using Chase Stuart’s draft value chart, which uses historical performance to measure the value of each individual pick, NFL teams had used more draft capital on Georgia’s defense than any other offense or defense in a single draft since the 1970 merger.

“It’s like one-stop shopping down there,” Philadelphia Eagles executive vice president and general manager Howie Roseman, who drafted nose guard Jordan Davis in the first round and linebacker Nakobe Dean in the third, told reporters. “You go to practice. You go to a game. You go to that facility and you’re going, shoot I’ll just go draft this whole team.”

Filed under Georgia Football, The NFL Is Your Friend.

Winning games vs. winning the draft

Josh follows up on Graham’s work that I posted about yesterday by throwing a dash of winning percentage into the mix (and also measuring over a longer time period). 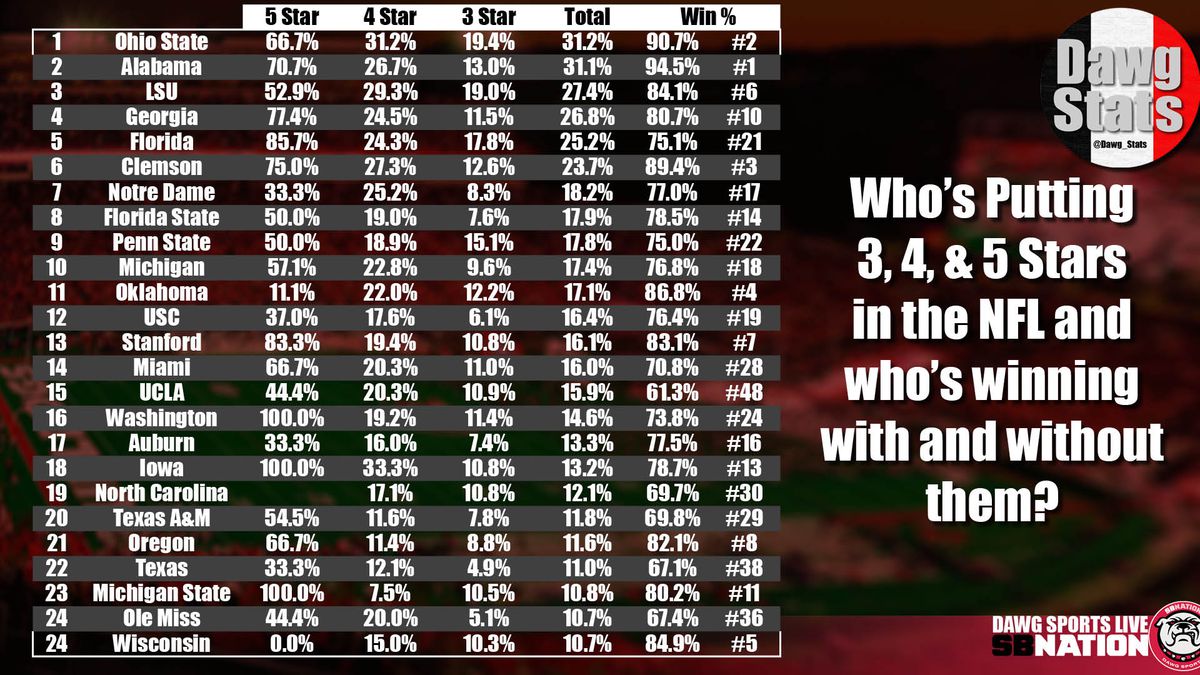 The results aren’t quite as rosy for Georgia (“Not everyone is overachieving by these stats. Georgia is 4th best at putting guys in the league, and lagging at 10th best winning percentage.”), but some of that can be chalked up to the time frame of 2010-20 that Josh researched.

I do think his context is useful.  After all, we’re cheering on the Dawgs for winning, not how many players make it to the next level.

Filed under Georgia Football, Recruiting, Stats Geek!, The NFL Is Your Friend.