How ‘ya doing there, Alliance?  The SEC Commissioner says hi.

… The playoff will remain at four teams through the 2025 season, when the current contract expires, but after that, “There’s nothing that exists after Year 12,” Sankey said at the Associated Press Sports Editors Southeast regional meeting. “There’s not the bowl relationships; there’s not a media relationship; there’s not a College Football Playoff format come the 2026 season.”

So from Sankey’s perspective?

You sure about that, Greg?  I mean, how can you expect to stand pat with a mere four-team CFP field?

Two SEC teams faced off in last season’s CFP National Championship, with Georgia beating Alabama, 33-18. Twelve of the last 16 national champs are SEC teams, and in the eight-year history of the College Football Playoff, the SEC is the only conference with a qualifying team every season. The last three national champions are Georgia, Alabama and LSU.

“People apparently didn’t take me seriously when I said we can leave it at four,” Sankey said. “So I sat there watching that (Alabama-Georgia) game, thinking they just thought I wasn’t serious.”

Sounds like we’re headed towards a fun poker game before 2026. 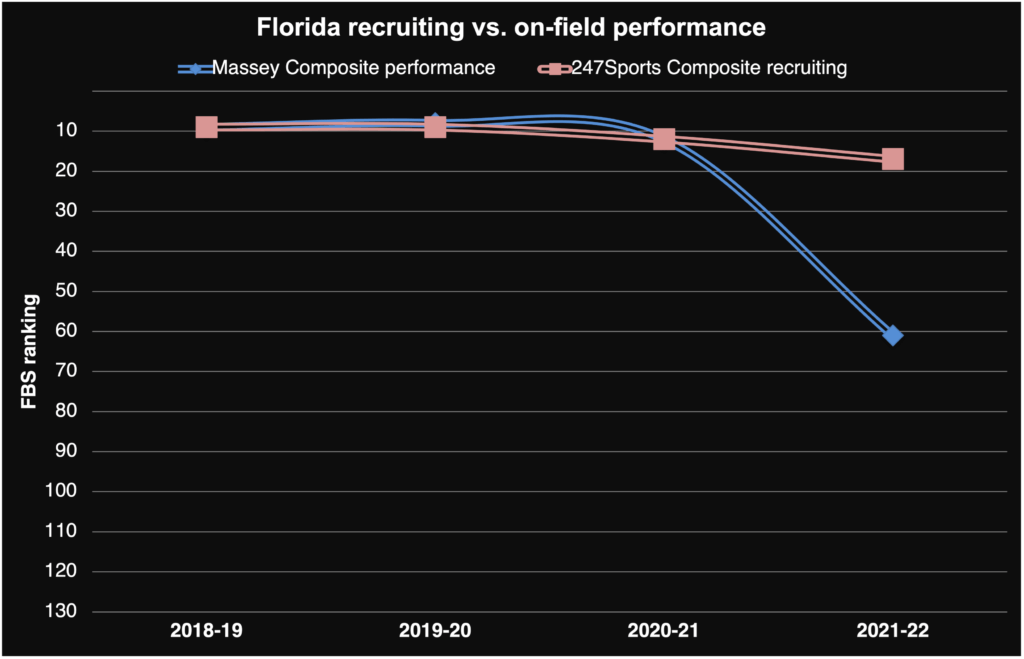 Mullen lacked the relationship-building gene necessary to engage elite prospects and wasn’t willing to invest effort in revamping his recruiting infrastructure. The result? A string of lukewarm classes that failed to keep pace in the high-rolling SEC. When Georgia dominated Florida 34-7 last October and Smart chose to emphasize the energy he pours into recruiting, the timing was in no way coincidental.

Florida had only a 12 percent hit rate on signing the top 10 in-state players across the past four years. That became a sore spot as Georgia (22 percent) and Alabama (20 percent) were pulling talent.

Florida still posted the nation’s 10th-best average class ranking over those four years, according to the 247Sports Composite. But with Alabama, Georgia, Texas A&M and LSU generating the top four averages, the talent gap widened.

This is a fair assessment:

This is one of those seasons when a lower bar for success is warranted — getting revenge on Kentucky, South Carolina and Missouri would be nice, for starters. Upset Utah in a sweltering opener or beat Tennessee for a sixth consecutive year and there’s a path to a nine-win regular season.

Although Florida embarking on a revenge tour against the likes of South Carolina will never not be funny.  Go Gata!

At least in the minds of some…

Our guest @MichaelWBratton has given us 3 BOLD predictions for this upcoming FB season:

– SCAR will defeat UGA in Week 3
– It will be Top-5 undefeated matchup on Oct. 1st between ALA & ARK
– TENN will battle UGA for SEC East crown

Which one is most likely to happen? Why?

I take it BOLD means pulling something completely out of your ass.  It’s like talent accumulation over the past four seasons accounts for little.

Of course, that’s just some talking head trying to stir up chatter.  What, though, to make of an SEC assistant coach who says this?

… At the end of his appearance on Kentucky Sports Radio today, Marrow reflected on Kentucky’s performance vs. Georgia in recent years. The hype for the 2018 game vs. the No. 6 Bulldogs in Lexington was huge, but the Cats lost 34-17. A year later, Kentucky got shut out 21-0. In 2020, Georgia won 14-3. Last season, the Cats scored two touchdowns vs. the No. 1 Bulldogs in Athens, which no other team had done at that point of the season; however, costly errors led to a 30-17 loss.

“In [2018], we were not ready for that game,” Marrow said. “But when we played them last year and went down there, I’m telling you, our guys went in and we were not — we really thought we would win that game. I don’t think you remember, but we had three field goals blocked. Wan’Dale [Robinson] drops the touchdown pass and then we missed the field goal on that and then we had two more field goals blocked. So we lost 30-17. I’m just telling you, if we picked that fumble up — the one they said wasn’t a fumble — that’s a different game because now they’re only up by three and we’re going into halftime.”

Apparently, some reminders about that 2021 game are in order.  First, here’s ESPN’s win probability chart:

Georgia’s win probability never dropped below 90% that day.  I guess that “if we hadn’t fucked up so much, we could have made the game closer” line of thought didn’t have much impact on the numbers.  A couple more statistical morsels:

And let’s not forget that the ‘Cats closed the game out with an epic 22-play scoring drive that lasted almost eleven and a half minutes, cutting the final margin to 17 points.

Somehow that gets you to the stuff that dreams are made of.

“This year — again, you take every game [seriously] — but I think it’s gonna come down to that game. November 19. Here. The second to last game. It’s gonna be cold, probably. Kroger Field’s gonna be rocking. It’ll be cold. It’ll be a good time to play some football.”

“The strength is our quarterback. I think starting with him, we return three starters on the offensive line. Our tight ends are back, which is a very talented room. All of our running backs. Receivers.

I’m beginning to think this season’s vibes are gonna be a little weirder than usual.

The NCAA took another step in cracking down on booster-led collectives as it relates to name, image and likeness (NIL) payments.

The Division I Board of Directors approved new NIL guidelines Monday, clarifying existing bylaws that prohibit boosters from being involved in recruiting. The group of school presidents rubber-stamped the guidance that college leaders hope will jump-start the NCAA enforcement staff to investigate potential rules violations, both past and future, as reported by Sports Illustrated last week.

Despite the clarity coming 10 months into the NIL era, the guidelines are meant to be retroactive. According to the guidelines, the NCAA enforcement staff is given the freedom to investigate those who egregiously violated bylaws in the past.

With the NCAA, the devil’s in the details, as you’d expect.

However, it’s unclear whether the NCAA will suddenly spring into action.

NCAA enforcement has been unwilling and maybe even unable to enforce existing bylaws, George and Smith say. For one, the organization is concerned any enforcement will trigger a bevy of antitrust legal challenges. Second, the NCAA enforcement staff is ill-equipped for a full-scale nationwide inquiry. It is down 15–20 members from pandemic layoffs. Smith says the association plans to replace people eventually.

The NCAA enforcement’s staffing situation “is the biggest issue” when it comes to why the organization has not deeply pursued violators, George says.

Once you get past that roadblock — no small thing — the issue then becomes who gets the stick.

“If they punish the kids, they will have lawyers lining up,” says Arizona-based sports attorney Gregg Clifton. “There will be a class-action lawsuit within 48 hours.”

NCAA sanctions are not expected to be directed at player eligibility but will instead sanction schools in other ways for not controlling their boosters, working group members said.

Many boosters and collectives are managed by platforms such as Opendorse that assure they remain in compliance by tracking all athlete deals. Several are managed by sports agents and savvy attorneys who have kept documentation of their communication and the quid pro quos that are necessary to adhere to state laws and the NCAA’s interim policy.

“I do think if the NCAA is able to go after the schools in some manner based on what the collectives are doing as representatives of a school’s athletics interest, that could put a stop to some of the inducement stuff going on right now,” says Mit Winter, a sports attorney who advises several collectives. “But if the NCAA declares an athlete ineligible, it’s likely that a lawsuit would ensue. Same with boosters and collectives.”

It’s pretty obvious that NCAA enforcement isn’t going anywhere near a college athlete for an NIL deal.  Punishing a school for the activities of its boosters, on the other hand… well, that might have some potential.  Were I running the show, I’d look for the most egregious example of overstepping I could find — and my guess is there are plenty of boosters out there who are at least as dumb as NCAA leadership has been — and make an example of it.

The fun part will be waiting to see if the school bearing the brunt of the inquiry sues the NCAA.  My bet is even money on that possibility.  Stay tuned!

Filed under It's Just Bidness, Recruiting, The NCAA

Georgia Tech’s athletic director’s not saying, he’s just saying, if you know what I mean.

Stansbury did not say there was a specific number of games that Tech has to win in order for Collins to continue into a fifth season, although his response made clear that the time has come for a better product on the field.

In response, this may be the understatement of the decade:  “On paper, significant improvement won’t be easy.”

Stansbury, in looking at what Coach 404 hath wrought, must have some sort of X-ray vision, because he sees things nobody else sees (Coach 404 excepted, of course).

“Him being ‘my guy’ is he’s recruiting at an incredibly high level,” Stansbury said. “I know we’ve got to fill the pipeline to get there. He’s my guy because I’m seeing the building blocks of what needs to be done ultimately to get the wins that we need to get.”

Some fans might challenge Stansbury’s assessment of Collins’ recruiting. Since bringing in the No. 27 class (247Sports Composite) in 2020 – headlined by Gibbs – the next two classes have ranked 47th and 53rd.

“Some fans”.  It’s easy to understand why the excitement level on the Flats is on the rise.

It’s the CFP’s world and we’re all just living in it.

Currently, a conference must play a full round-robin schedule to hold a championship game if it does not have two divisions, as the Big 12 has done since 2017. (The American Athletic Conference has operated for the last two years with an exemption waiver.)

I mean, who can argue against freedom, right?  Especially if it means being free to deliver the best seedings for the college football playoffs.  Talk about your righteous cause!

And before some of you jump my case about how much it sucks that Georgia doesn’t go to College Station for two more years and that needs to be fixed… well, I agree that it sucks, but nobody’s holding a gun to Greg Sankey’s head to make him stick to an eight-game conference schedule.  All this bullshit is a matter of choice for the P5 and right now the desire is to make the regular season the most efficient postseason delivery operation it can be.

Although I have to admit it’s amusing, in a sad sort of way, that these humps can tweak the regular season like this, but still can’t figure out a way to expand the CFP.

What is the deal with Will Levis?

Not being snarky here.  But how does a kid coming off a season when he finished sixth in the conference with a middling passer rating of 147.99 jump to this halfway through the following offseason?

Going to save all these screen caps and bury them in a time capsule pic.twitter.com/r3Omxhtjl4

I mean, I watched him against Georgia.  He threw a lot of passes and wasn’t intercepted, but it was a day of dinks and dunks (he only averaged 4.2 ypa).  He did have a couple of nice scrambles, but nobody is going to confuse him with a burner.

So how did we get from there to here?

Now Stoops says Levis can be the first quarterback taken in next year’s NFL Draft. Two scouts I spoke with last week say that’s not hyperbole.

Both scouts, without prompting, brought up the meteoric rise of Burrow.

From a project recruit, to a run-only option, to Joe Burrow comparisons.