Can’t say I argue with this:

That means regression is coming in 2022. It’s unavoidable. I mean, Georgia just had 5 defensive players in the 1st round of the NFL Draft and 8 defensive players total. The Dawgs rank No. 122 out of 130 FBS teams in percentage of returning defensive production. That doesn’t include the loss of defensive coordinator Dan Lanning. Even a 5-star factory like the one Kirby Smart built in Athens is going to take a step back.

The question is obvious — how significant is that step back?

But, yeah, it’s the how much aspect that’s hard to gauge.  (At least for me.)

I do think O’Gara makes some interesting, and likely valid, points when he notes that in the Smart era, Georgia has yet to produce back-to-back seasons when defensive scoring finished in the top ten nationally, as well as that it’s not logical to expect a program that has to replace five first round NFL draft picks to do so without missing a beat.  But I think he’s playing up Lanning’s departure more than is justified, in my opinion.  Not to say Lanning didn’t do a great job, but this year’s defensive brain trust is an experienced group that carries over from last season.

Besides that, when you look at Georgia’s regular season competition, what programs are likely to feature offenses improved over last year?  On paper right now, the only one I feel confident projecting to be is South Carolina’s, because of its upgrade at quarterback.

There’s one other X-factor O’Gara doesn’t take into account, although I’m not sure how to factor it in, either.  If Georgia’s offense is about to take off this season, how much of an effect will it have on how Georgia’s defense plays in the second half of lopsided games?  You got me.

After all that, I don’t find myself disagreeing significantly with his take:

The most likely scenario is that UGA allows at least 15 points per game against Power 5 competition. Shoot, even UGA’s 2017 national runner-up defense allowed 16.9 points per game against Power 5 competition. I’d say that’s about best case scenario for the 2022 squad. Clemson basically posted that number last year and still finished with the No. 2 defense nationally.

What I think will be of greater interest than the overall average is whether the average declines as the season progresses, which would be an indication that the relative lack of experience compared to 2021 is being shaved away.   What are your thoughts on defensive regression in 2022?

It’s easy to be frustrated over the lack of control being exercised over NIL compensation.  It’s also easy to mock the NCAA for its (to date) ineffective approach to reining in perceived excesses.  I would argue, though, that the current situation is driven more by conscious choices made by the schools and their conferences than anything else.

Let me give you a couple of examples of what I mean.  Take this: 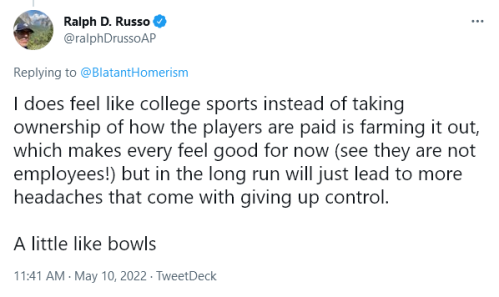 The schools have always abhorred the idea of them paying college athletes directly.  Once the Alston ruling came down, that left NIL compensation as the default payment delivery system, a convenient way for the schools to maintain a hands off approach to player compensation.  Of course, that’s had a cost, too, as schools are now finding out what it’s like to let their boosters operate openly, and with few controls, in funneling cash to kids.

And here’s a quote from Notre Dame’s Mike Brey. 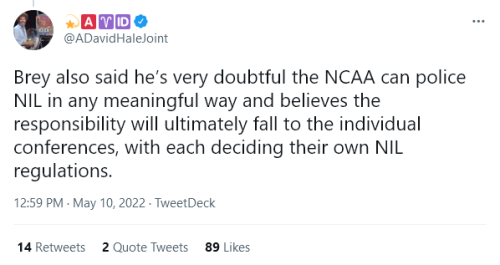 Greg Sankey, all by his lonesome, could stop the aggressive collective actions at places like Texas A&M and Tennessee today, if he wanted to, and, since it would be action taken at the conference level, there wouldn’t be a damned thing an antitrust lawyer could do to stop him.  The reason he doesn’t, then, despite all the grumbling out there, isn’t because he’s afraid of litigation.  It’s because he doesn’t want his conference to disarm unilaterally on NIL.  Again, it’s a conscious, deliberate choice on the part of the conference and its member schools.  They would rather live with what’s going on now than risk seeing schools from other conferences outbid them for talent.

If college football is living in the Wild West, it’s because the schools and the conferences have chosen not to send in the sheriff, on purpose.

An admission against interest

Talk about your classic “damn, son, I don’t think I’d have said that” quote:

“(The schedule) just so happens to be one of the toughest every year, and I think that’s also just a product, obviously, of the league, but then when your archrival is in another league and they are who they are, it’s just going to make for a tough schedule,” athletic director Todd Stansbury said in an interview with The Atlanta Journal-Constitution.  [Emphasis added.]

I guess Coach 404 just got a pass on competing in Athens this season.  Sheesh.

The best insight money can buy.

I know I’ve said this before, but when I read crap like this, it continues to amaze me that people shell out good money for it.

The tea leaves suggest the Longhorns are well-positioned in the Manning sweepstakes. On3.com lists Texas as the frontrunner for Manning’s commitment ahead of Georgia and Alabama, although the rising senior at Isidore Newman in New Orleans has said little publicly to distinguish Texas from those SEC powers.

Get it?  The family is famously closemouthed, yet the tea leaves suggest.  Where, on the astral plane?

Seriously, I don’t understand, but those of you who pay for this, enlighten me.  Do you feel like you get your money’s worth?  More specifically, if you follow recruiting, Jeff Sentell at Dawgnation does a pretty good job of tracking Georgia’s without charge, so is it worth whatever it’s worth to pay for a recruiting service?

I’ve made a decision.  It’s for your own good.

You need a little live Otis Redding in your morning.