YPP and the Gator Standard

Matt’s done his annual look at yards per play, conference by conference, and has posted the numbers for the SEC’s 2021 season (conference play only, with the championship game not included).

If something seems amiss there, well, you’re not wrong. I mean, fifth in the conference in net YPP should result in something better than a 2-6 conference mark, shouldn’t it?

Since Net YPP is a solid predictor of a team’s conference record, we can use it to identify which teams had a significant disparity between their conference record as predicted by Net YPP and their actual conference record. I used a difference of .200 between predicted and actual winning percentage as the threshold for ‘significant’. Why .200? It is a little arbitrary, but .200 corresponds to a difference of 1.6 games over an eight game conference schedule and 1.8 games over a nine game one. Over or under-performing by more than a game and a half in a small sample seems significant to me. In the 2021 season, which teams in the SEC met this threshold? Here are SEC teams sorted by performance over what would be expected from their Net YPP numbers. 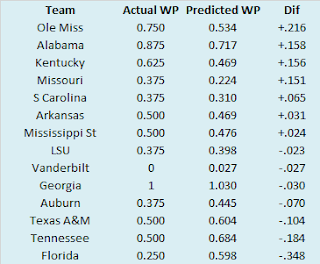 Ole Miss and Florida were the SEC teams that saw their actual record differ significantly from their expected record. The Rebels overachieved by winning both of their one-score conference games and posting the best in-conference turnover margin (+5) of any SEC team. Meanwhile, Florida ended the Dan Mullen era by dropping their final four SEC games. Of their six conference defeats, four came by a touchdown or less. The Gators also had the worst in-conference turnover margin of any SEC team (-8) and were done in by non-offensive touchdowns.

Being an offensive genius who develops players better than anyone only gets you so far, it seems.

8 responses to “YPP and the Gator Standard”