Georgia is a bigger favorite against Oregon in Atlanta than at home against Tennessee.  Hmmm…

Matt is back with his first half point differential metric.  Here’s how the 2021 SEC regular season played out: 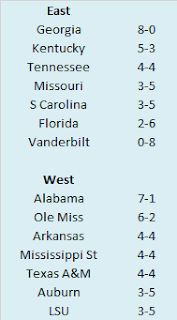 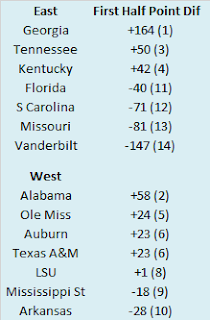 Georgia was on pace to be one of the best SEC champions of all-time until their lackluster performance in the SEC Championship Game. I’m sure most Georgia fans will take the end result though. Meanwhile, despite winning the SEC in back-to-back years, Alabama showed some vulnerability as evidenced by their relatively low first half differential. Is this a temporary setback (they did play for the national title after all) or a sign that Saban’s stranglehold on the sport is slipping ever so slightly?

I’m gonna say nah to that.  But it does give credence to the idea that Alabama had to keep their offensive foot on the gas a lot longer than Georgia did, which explains some of the statistical differences in the two teams’ passing attacks.

This is so spot on.

Not that the suits care…

“So, despite all those great names, the pick here is easy.”

Classic “other than that, how was the play, Mrs. Lincoln?” vibes from Brandon Marcello here:

Yes, Georgia quarterback Stetson Bennett hoisted the national championship trophy with a win against Alabama (and was tremendous in the College Football Playoff with five touchdowns and zero turnovers), but Bryce Young lifted the Heisman as the top player in the country for his consistent, week-to-week performances and late-game heroics– and if his that’s not enough to be trusted in the final moments of the game, go ahead and take a chance on the other QBs in the SEC who have never faced such high-pressure moments and delivered under a time crunch.

I will give him credit for not mentioning Metchie and Williams, though.

Flat on the Flats

Some Georgia Tech nuggets for your morning pleasure:

–Most books have Clemson listed as an 18.5 to 19.5-point favorite vs. Ga. Tech in the season opener. The total is 49.5 or 50 points. The Tigers have won seven in a row over the Yellow Jackets in this rivalry. These teams will play on Monday night of Week 1.

–FanDuel has Ole Miss listed as a 10-point road favorite (at a -105 price) at Ga. Tech in Week 3. The Rebels host Troy in their opener and then Central Arkansas before making the trek to Atlanta.

–FanDuel has Ga. Tech listed as a 28-point underdog in its regular-season finale at Georgia.

I only hope once the media gets done thoroughly chewing over expansion at SEC Media Days it can turn to the next burning question the conference will soon face.

Big 12 director of officials Greg Burks pleaded directly with Oklahomans on Thursday with the final comments of his annual presentation on rules changes when he was finally asked the question he’d been anticipating all morning.

“Is the Horns Down issue a dead issue?” asked Kirk Bohls of the Austin American-Statesman in the final question to Burks during his discussion on college football rule changes at Big 12 Media Days at AT&T Stadium.

“I knew that question was coming sooner or later,” Burks cracked. “Let me be very clear with Horns Down. I have no ownership of this symbol or this symbol (gesturing Horns Up and Horns Down). It’s the same as all other symbols. It’s when you do it, who you do it to and in which manner you do it.

“Please, the state of Oklahoma, I meant no offense. You don’t have to send me emails. We are just looking at that as any other act, and you note that unsportsmanlike conduct is in there. It’s not about Horns up or Horns down. It’s the manner that you do anything on the field to an opponent that is an unsportsmanlike penalty.”

Who will be the first SEC school to be hit with a penalty for a Horns Down gesture, and why will it be Ole Miss?

Filed under SEC Football, Texas Is Just Better Than You Are.

I presume “Will expansion discussion overshadow football talk at SEC Media Days?” is a rhetorical question from Chip Towers.

Hale Almand, Jr.:  No lawyer is ever going to make a more embarrassing argument in court than I did with my ”We may not be able to make a university student out of him, but if we can teach him to read and write, maybe he can work at the post office rather than as a garbage man when he gets through with his athletic career.”

… In repelling previous efforts by college athletes to gain recognition as employees under the FLSA, the NCAA emphasized case law (Vanskike v. Peters) indicating that while the 13th Amendment abolished slavery and involuntary servitude, there is a so-called “slavery loophole” for prisoners and, arguably, college athletes. The key question for the Third Circuit is whether Judge Padova applied the appropriate test in dismissing the NCAA’s motion to dismiss.

McDonald, while referencing a South Park episode that satirized the NCAA and member schools as slaveholders, finds it telling that a core defense against paying college athletes is the slavery loophole. “The fact the NCAA—and now SEC—actually rely upon legal precedent about the 13th Amendment slavery loophole to defend the exploitation of free Student Athlete labor shows, in this case, truth is stranger than fiction.”

And to think some of y’all believe all that plantation talk was over the top.

Filed under SEC Football, See You In Court, The NCAA