Based on their performance against Samford, Georgia dropped to 12th in the conference in red zone touchdown percentage.  Obviously, that’s a small sample size (the Dawgs were 8th in that department in 2021) and largely an irrelevancy when you’re pitching a shutout, but it’s not something you’d want to see continue when they start facing offenses with a pulse.  There’s not a big future in trading field goals for touchdowns.

The red zone was the main problem Saturday: Three times inside the 10, Georgia had to settle for field goals. But between the 20s in the first half, the Bulldogs amassed 235 yards on 26 plays. (That excludes the end-of-the-half drive, which covered 22 yards on the first three plays before two incompletions.) And even the first drive of the second half reached the 20 before it stalled, resulting in Bennett running himself into a 17-yard sack.

“There were some small, minute things that can be fixed easily,” center Sedrick Van Pran-Granger said.

And, sure, that shouldn’t be dismissed.  But I keep waiting for Monken to unleash his secret weapon. 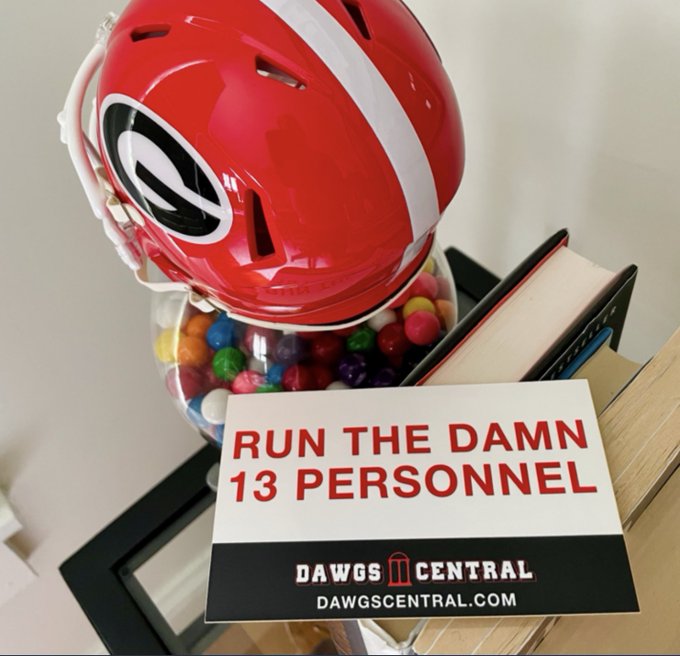 It’s frustrating that Arik Gilbert doesn’t appear as game ready as we’d like.  I hope he and Delp get there as soon as possible, because I have the feeling those three-TE sets in the red zone would be deadly.

The evolution of Kirby Smart’s offense

You’ve probably seen the stat by now:  Georgia — Georgia! — is second in the country in passing yards per game.  Georgia is averaging forty pass attempts a game.

If you wonder what is going on, Kirby Smart has an answer for you ($$).

Head coach Kirby Smart was asked Monday what the identity of this offense is and how it has evolved since he got to Georgia.

53 yards being the width of a football field.  You know what’s missing from that quote?  Sure you do.

The stat: 6.6 yards per attempt

That’s the average gain of a Jake Fromm pass vs. SEC opponents this season, a steep decline from the past 2 years — down from 9.2 yards per attempt in 2017 and 8.8 per attempt in 2018. The current number ranks 8th among regular SEC starters, nearly 5 full yards per attempts behind the league leader, Tua Tagovailoa (11.3), and almost 4 yards behind Joe Burrow (10.4).

It’s also one of many, many ways to point to the recurring theme of Georgia’s offense in 2019: Namely, the Bulldogs’ mystifying lack of explosiveness…

In general, Fromm has been good for roughly 1 successful downfield shot per game — his only 25+ yard completions in the wins over Notre Dame, Florida, and Auburn were touchdowns covering 36, 52, and 51 yards, respectively — amid a steady diet of dinking and dunking. Despite their enviable depth at wide receiver, the Bulldogs’ average yards per catch in SEC games (11.0) ranks 10th out of 14 teams.

As long as the defense is holding up its end of the bargain the risk-averse approach makes sense: Georgia is tied for the national lead in scoring D vs. FBS opponents and remains the only team that has held every opponent to 17 points or less in regulation…

But with the switch to James Coley as offensive coordinator, the Georgia offense has even more deeply embraced the “impose our will” manball tendencies that they had cultivated under former offensive coordinator Jim Chaney. Against South Carolina, Georgia ran on 60% of standard downs even though their overall run rate was only 42.6%. That means there were a ton of run-run-pass sequences…

Kirby wants more explosive plays — hell, what coach doesn’t? — but listen to the way he thinks his team should get them.

“Being explosive is a lot of things,” Smart said. “It’s blocking downfield. It’s winning one-on-ones. It’s speed, vertical speed versus horizontal speed. There’s a lot of things combined in that.”

It’s all about players beating players.  Nothing about play design or offensive philosophy.  What all that should tell you is that when it comes to designing an offense, Smart values efficiency over explosiveness.  Again, there’s nothing wrong with that, per se, but it also leaves you without much to fall back on when, like Saturday, the efficiency engine sputters repeatedly.

Offensive philosophy has gone from nothing to everything in a few short years.  Smart deserves a ton of credit for recognizing the need to change his approach on that side of the ball, despite what every fiber of his inner being was telling him.  I’d argue it’s just as big a deal as Saban’s conversion was.

I won’t say manball is dead, per se, but I will say there’s been a sea change in direction since Georgia got their ass kicked in the 2019 SECCG.  That game probably ought to go down as the most important loss in Georgia history.

Nick Saban evolved and modernized his offense with Lane Kiffin. Kirby Smart did the same, firing James Coley after one year for Todd Monken.

It feels like Jimbo Fisher's time to change offensive philosophy. (And perhaps it's no coincidence Coley is now on A&M's offensive staff). https://t.co/Th8abas5bv

Even when you think you know…

First of all, let me say that all this “Alabama has issues!” overreaction to Alabama’s narrow victory over Texas is just as silly as Sark’s invocation of rat poison.  We were hearing similar stuff last season after their escape from Florida and loss to TAMU and look how that ended up.  There are approximately 130 other D1 teams that would love to have Alabama’s issues.

I say that to preface a question I have about this year’s team:  is it possible that Nick Saban has misread what he’s got?  Remember, this is something he said a couple of weeks ago:

“I like this team, I really do. We’ve got a little more maturity on the team, I think. We’ve got good guys on the team. They work hard. They’ve got a really good attitude. We’ve got really good leadership.” He says he likes the intangibles the team has but he’s not necessarily saying it’s his most talented team. “We’ll see about that,” he said.

He’s got issues on the offensive line and at wide receiver, which has had a ripple effect on the run game, as David Ubben points out ($$).

More than 20 percent of Alabama’s rushes against the Longhorns went for a loss or no gain, and without Jase McClellan’s 81-yard touchdown run in the first quarter, Alabama’s talented stable of running backs managed just 42 yards on 16 carries (2.6 yards per carry), helping explain why the Tide mostly abandoned the running game in the second half.

In the final 30 minutes, Alabama ran 38 offensive snaps and handed the ball to a running back seven times. Six of those seven carries went for fewer than 4 yards. The seventh went for … 4 yards.

As a sub-question, has Saban having to rely on the transfer portal to fill key positions perhaps impacted his ability to assess his team’s shortcomings?  I saw bringing in a Vandy transfer to fill a hole on the offensive line as a red flag.  Saban, though?

Asked if this season is unusual because of the several transfer additions, Saban said Alabama has less incoming transfers than most schools. Saban said summer scouting reports on opponents were more difficult because of the number of transfers those teams added this offseason. Saban said transfers Alabama added needed to play and Alabama needed them to play. He compared it to NFL free agency, saying they were looking for players with the right criteria for their position and for the program. “Our philosophy is, we’re going to create more value for them … than they can get someplace else,” he said. Saban used that to say college is for creating value more than it is making money, even though NIL has brought that to the forefront. “Our guys have done really well in name, image and likeness because of the iconic brand we have at the University of Alabama,” Saban said.

How much can you really learn about a player’s quality in a single offseason?  Maybe we’re finding out.

Again, I don’t want to read too much into this.  As last Saturday showed, as long as Bryce Young is Alabama’s quarterback, they’ll never be out of a game.  I’ll be shocked if the Tide doesn’t show up in Atlanta this season.  But I do wonder how well Nick Saban has read his team.

So, there’s a Stingtalk thread comparing Jeff Sims with Reggie Ball — and before I go any further, let me say as a Georgia fan, there is no comparison, as Reggie Ball will always be an all-time great — that gave one commenter there the opportunity to walk down memory lane.

“Right now, Sims would have to ball out to be Reggie.”  I’m not sure that’s the compliment you think it is, dog.

Roll Bama Roll snark aside, the injury situation at South Carolina is a perfect illustration of what you have to have to win in the SEC.

South Carolina will be without two defensive starters Saturday against No. 1 Georgia after outside linebacker/edge rusher Jordan Strachan and middle linebacker Mo Kaba suffered season-ending ACL injuries last week in the 44-30 loss at Arkansas.

… South Carolina lost multiple players to injury in the Arkansas game, including All-SEC cornerback Cam Smith, who left the game in the second quarter with an upper body injury. The Gamecocks are hopeful of getting Smith back for the Georgia game as well as senior safety R.J. Roderick, who missed the entire Arkansas game after injuring his arm in the season-opening win over Georgia State.

South Carolina hasn’t been able to stop run on defense or run the ball on offense in the first two games. The Gamecocks are ranked 129th out of 131 FBS teams in rushing defense. They’re allowing 247.5 yards per game on the ground and averaging just 59.5 rushing yards themselves, which ranks 125th nationally.

Flashy transfers are nice (and make no mistake about it, Rattler is a big improvement at quarterback for them), but depth is how you win titles and depth is something the ‘Cocks lack, big time.  Georgia loses a bunch of defensive players to the NFL and simply reloads on that side of the ball, allowing just under 80 rushing yards per game.  South Carolina didn’t have a lot to start with and finds itself in a deeper hole going into just their third game of the season.

Filed under 'Cock Envy, The Body Is A Temple

Texas is back, baby.

Sark, are you fucking kidding me here?

Your team lost. Counting moral victories as rat poison?  That phrase doesn’t mean what you think it means, obviously.