You have to watch this clip.  It’s fabulous.

Want the truth about UGA’s 2017 SEC title? Here’s some of it from 2 players who won it — Davin Bellamy and Brian Herrien 🐶🏈 #GoDawgs @DavinBellamy17 @brianherrienn pic.twitter.com/NtDVodDuD5

Auburn in the urinals.  Poetic.

If at first you don’t succeed, spend, spend again.

Via Erik Evans (!), this is one helluva data point.

Auburn has now paid more money in buyouts to football coaches than Nick Saban has earned at the University of Alabama.

On the Plains, ROI is just a myth.

Another SECCG tidbit to consider

The Bulldogs have reverted more to a ground-and-pound identity in the final third of the season, running the ball 60.7 percent of the time in the last four games vs. 48.4 percent in the first eight. But playing indoors against an LSU defense that ranks 11th in the SEC in passes surrendered of 20 yards or longer (40) and 30 yards or longer (17), Stetson Bennett may get a few more chances to air it out.

Does Monken revert to “take what the defense gives you” mode?  Does he have the horses to do so?

McDaniel telling Tua in his ear piece that Georgia is the best team in the SEC is an ELITE troll😭😭 pic.twitter.com/qy7CBBaZJH

It’s how you finish that counts.

Georgia, depending on where you look, is around a 17-point favorite in the SECCG, but shouldn’t be, according to the SEC Network’s Cole Cubelic.

“If you can physically match up with them up front, it’s kind of why I think the SEC Championship Game is going to be closer than people think, I think the LSU defensive line physically is going to be able to hold up,” he said. “That front 7 will hold up. Georgia does not just play bully ball out of the gate.”

The “If” there in the first sentence is doing a shit ton of heavy lifting, methinks.  Over the course of an entire game, is there a single defensive front that’s managed to physically match up with Georgia this season?  Now, if you want to criticize the Dawgs for slow starts, that’s a stronger argument, but still, last time I looked it’s a four-quarter game.

Turnout bumped back up to 293 voters this week.  The average number of teams appearing on a ballot dropped to 4.1, which again makes sense as we approach the end of the regular season.  A total of 39 teams received votes. 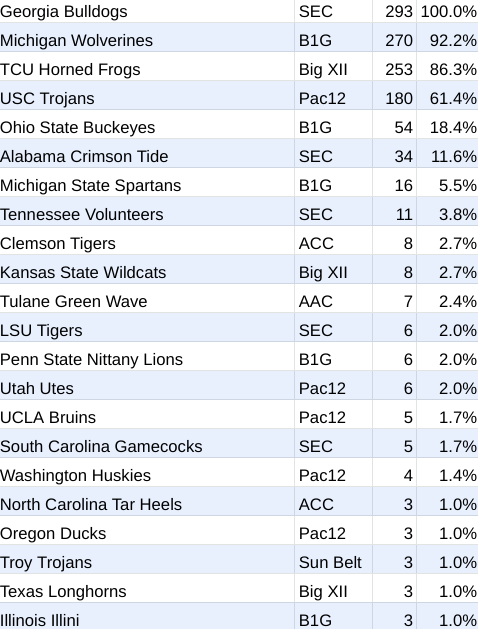 Two Tier One (90+%) teams, with TCU close by.  And only one other team appearing on over half the ballots cast.  The gap between four and five increased significantly.  (Although I am sort of curious how many folks would pick USC to beat Ohio State on a neutral field.) 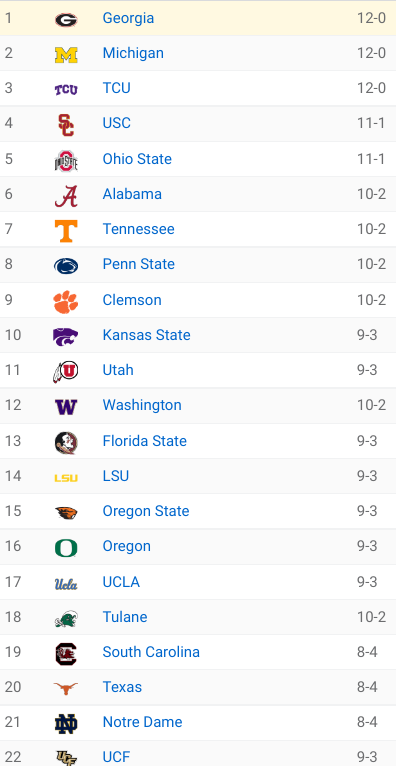 Identical through the top six, and really, if you ignore the joke vote for Michigan State, the only real difference between the two rankings in the top ten is Penn State’s placement.  (I think we’ve got them pegged more accurately than the selection committee, for what it’s worth.)

With the Ohio State loss, conference affiliation essentially evened out this week. 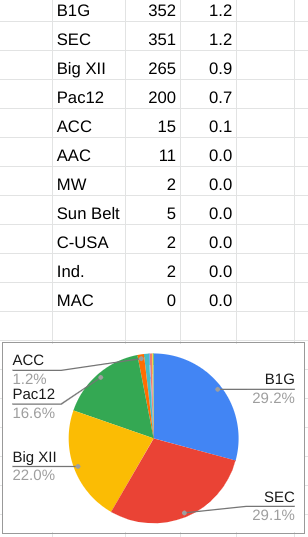 Georgia voters comprised 61.4% of the total pool this week, a slight rise. 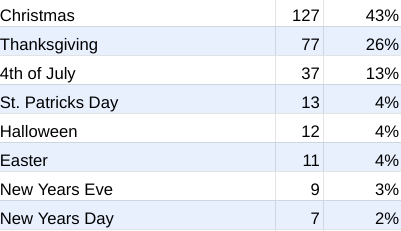 No votes for Valentine’s Day, so I guess we’re not a bunch of hopeless romantics.

Next week, after the championship games, will be the last Mumme Poll vote for the 2022 season.  Don’t miss it!

Stewart Mandel ($$) is here to clue us in on why playoff expansion is a real need.

But the impetus for a 12-team Playoff has very little to do with crowning a national champion. It is attempting to solve for:

• The fact that Ohio State could make the Rose Bowl and its deflated fans won’t likely care enough to travel to Pasadena. In a 12-team CFP, it’d be hosting a first-round Playoff game at The Horseshoe.

• The fact that Saturday’s Clemson-UNC ACC championship is meaningless to anyone outside the ACC. In a 12-team CFP, it’s for an automatic bid.

• The fact that Tulane possibly reaching a New Year’s Six bowl is being met with a collective yawn. In a 12-team CFP, it’s Tulane making the Playoff.

• And that instead of watching great players like Alabama’s Bryce Young and Will Anderson or Tennessee’s Jalin Hyatt play at least one more meaningful college game, we’ll likely be watching their backups play in a New Year’s Six bowl instead.

Amazing how he can compile a list like that without a single mention of money.  Although I suppose I should give him credit for not claiming it’ll cure cancer as well.

College football has both the best regular season in sports and the most anticlimactic postseason in sports. Many disagree, but I personally believe a more inclusive Playoff system will benefit both.

Well, shit, I guess he sort of did.

You sort of have to admire the efficiency of this:

Freeze is asked about assistant coaches, and he says he has his own list of candidates and his agent Jimmy Sexton had a list for him this morning.

Freeze gets choked up thanking Sexton for sticking with him.

Although, they could just go all in and name Sexton an assistant AD for football matters and be done with it.

Filed under Auburn's Cast of Thousands, Jimmy Sexton is the Nick Saban of agents and is Nick Saban's agent

Observations from the armchair, the return of COFH edition

Well, Kirby warned us he gets a little nervous about not having control of team prep during Thanksgiving week and his charges set out immediately to prove his concerns valid, allowing their first first-quarter touchdown of the season.  I don’t know if the cause was turkey hangover, the noon start or simply taking Tech way too lightly after Coach 404’s departure or (probably) a combination of all three, but it was disappointing to watch, especially the nine-yard touchdown run by Tech’s designated running quarterback that came in the wake of Lassiter and Chambliss getting sucked into the middle and completely losing contain.

The rest of the first half was a bit of a slog, as the teams combined for six punts afterwards as the Dawgs ground out a 10-7 lead at the half.

Somebody flipped a switch during halftime, though.  Here’s how Tech’s first five possessions of the second half went:

Add it all up, and you’ve got 22 plays that netted a grand total of minus-2 yards.  When the dust settled, the scoreboard read 37-7.  It was as dominant a stretch of football as the team played all season.  When they get up a head of steam, they really are hell on wheels.

All in all, they went out and took care of business against a Tech team that was more motivated and better coached than we’ve seen in a while.  They’re 12-0 and are making all the right noises about taking an SECCG against a three-loss opponent seriously.  I hope this time next week we’re all thinking this bunch looks like it’s peaking at the right time.