“Now, obviously there’s a lot of others out there we’d like to have too …” Napier said.

Barring another signing day shocker next week, Florida’s Big Three will hit a new low for in-state recruiting — at least by one measure.

The Gators, Seminoles and Hurricanes are on track to sign only three Florida natives who are ranked among the nation’s top 100 prospects, according to the 247Sports composite. That’s the lowest number of the modern recruiting era; they landed four in three of the past four cycles.

Another concerning figure: Georgia will end up signing more of the state’s top recruits (six) than the Big Three combined.

The next step in recruiting rankings

I have no idea what their methodology is in reporting this, but if you’re curious, on3.com’s team rankings include average NIL $.  Georgia is one of five teams with an average in excess of $100,000.

“Personal use was strictly prohibited.”

UGA issues another statement about the fatal crash.

UGA athletics out with another statement tonight with more concerning the car involved in the crash that took the lives of Devin Willock and Chandler LeCroy. pic.twitter.com/lvPneCzRVt

It’s interesting to me UGAA felt the need to get that out there before the investigation has been completed.  Certainly, it comes off as an attempt to draw a boundary regarding authorization, but I can’t help but wonder if that’s a line that had been ignored previously on a regular basis.  Whether it was or not, you can bet it will be adhered to going forward.

Liability issues aside, it does make it clear that whatever LeCroy was doing that night wasn’t part of her official duties, which is not the same thing as giving credence to the AJ-C’s insinuations.

The next shoe drops.

Can’t say I’m surprised by the news, which is not the same thing as saying I think he’s out the door.  But it would be dumb not to take the invite and interview, because you never know what may come down the road.  I have no doubt Smart will do whatever he can to retain Monken’s services, but if the offer’s attractive enough and Monken simply prefers the NFL life to that in college, there ain’t much Kirby can do about that.

On the bright side, if Monken does elect to go back to Tampa Bay, it’s not like Georgia won’t have plenty of options for a replacement.  But let’s hope it never gets to that stage.

The #Ravens interviewed Georgia offensive coordinator Todd Monken for their OC job this week, per source. Monken has been eyeing a potential NFL return and also is slated to speak with the #Bucs.

Filed under Georgia Football, The NFL Is Your Friend.

Josh Brooks is thinking of a new way to honor Charlie Trippi and it sounds like it’ll be a pretty nice one.

As part of the phase one construction to Sanford Stadium to be completed by the start of the coming season, a 61st row is being added on the south 100 level where the concourse will be widened and new restrooms and concession areas will be added.

“We’re toying with calling it the 62nd row in honor of Charley Trippi,” Brooks said of the retired jersey number of the Bulldog great who also died in October at age 100. “Kind of like hotels don’t have a 13th floor. We don’t have a 61st row and just go straight to 62. It will be a special row with a seat with the back of it and it’s under the overhang so it will be very popular.”

I’m sure there won’t be any kind of premium for it either, right, Josh?

Did you know UGA has to replace Stetson Bennett this season?

Expect this kind of talk to intensify as we approach G-Day.

As Georgia players began offseason workouts this week, the months ahead will determine who will replace Bennett when the Bulldogs open their season on Sep. 2 against Tennessee-Martin.

Carson Beck, who will be entering his redshirt junior season, served as the backup this season and would seem to be the clear favorite, but former five-star Brock Vandagriff from Prince Avenue Christian could make a push and redshirt freshman Gunner Stockton from Rabun County is also part of the three-player race.

“We’ll just start at square one,” Beck said. “Nothing is set in stone. Every day each one is going to come in and compete and work our butts off and work our tails off.”

QBR snark aside, the one I’m most curious to see on the field is Vandagriff.

“I’ve taken huge leaps since I’ve got on campus, but the main thing for me is I’ve been watching 30 to 45 minutes every morning different cutups of our offense and checks,” Vandagriff said. “I believe those things are just invaluable. Coach Monken has helped me out with that. Just being able to know what I’m doing at all times like the back of my hand. Not having to guess any out there.”

Beck’s gotten the live game work.  Stockton has time on his side.  Vandagriff pretty much needs to make an impression the game is slowing down for him.  We’ll see soon if that’s the case.

Coming soon, to a GTP Gift Guide near you

Yesterday’s post about Monken’s success calling plays inspired me to rummage around YouTube, looking for some clips that might have illustrated that.  No such luck on that front, but I did find something illuminating.  It’s a breakdown of plays from the Peach Bowl and it does an excellent job of showing out what I like best about Monken, his ability to take what defenses give him.

Give it a watch. I think you’ll be as impressed as I am.

Out of state beautification project comes to fruition. 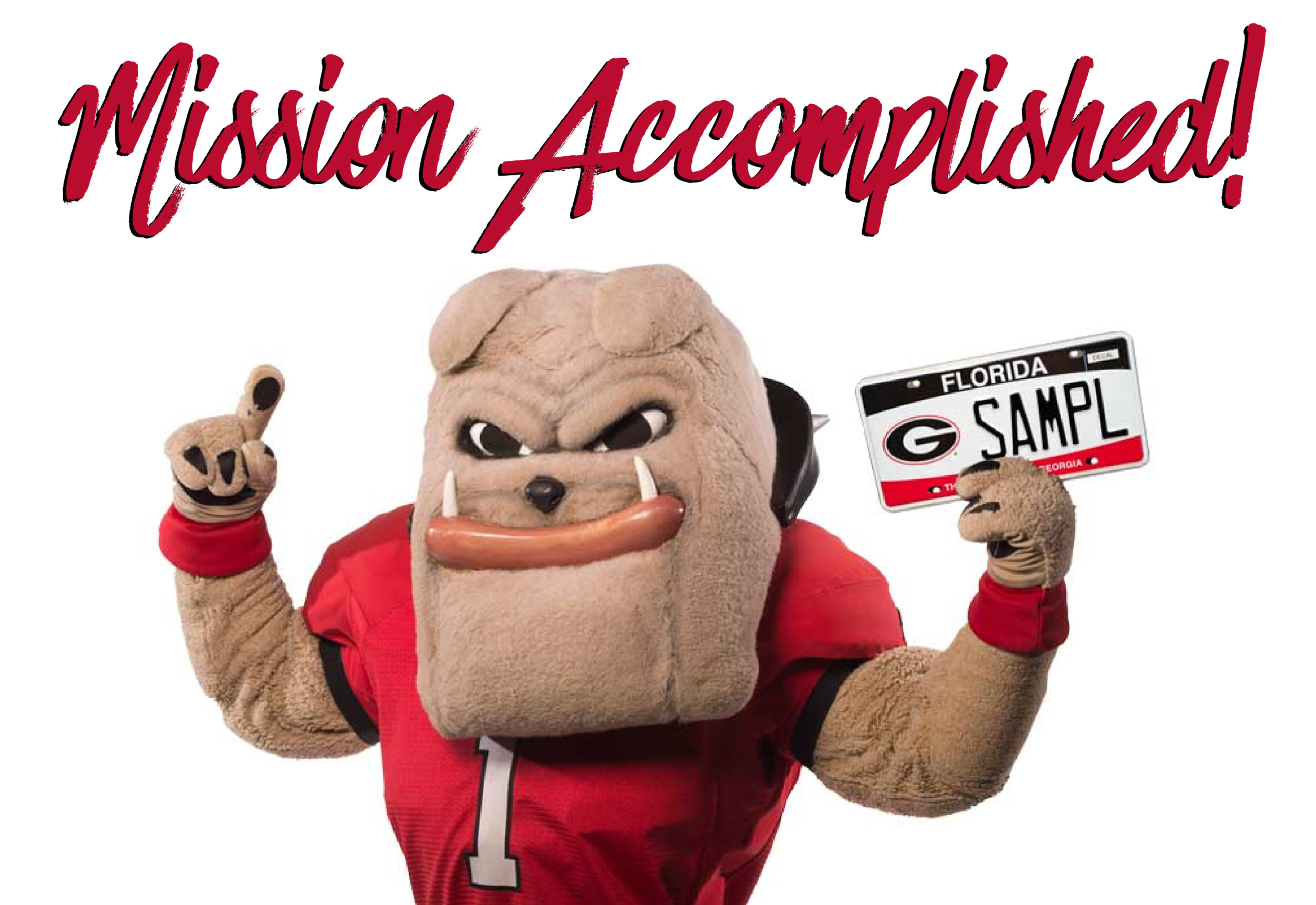 We did it, Bulldogs!

Thanks to the dogged determination of UGA alumni and supporters across the state, we sold 3,000 vouchers for a UGA specialty license plate in Florida!

Our team is now working with the State of Florida to verify each sale. Once that becomes official with the state, they will begin production of the license plate for those who have purchased a voucher. It will take approximately 3-4 months for the plates to be produced and mailed to your local tax collector’s office.

This, folks, is stunning.

Godd Monken overseeing one of the most efficient splits the last half-decade — only one of UGA's most-repped concepts in meaningful minutes finished with a Success Rate under 50% pic.twitter.com/ztBBhGiQl3

That’s right — basically every one of Monken’s standard calls but one worked over half the time, and that one had a success rate just under 50%.  That just doesn’t happen.  At least not very often.

I’d like to think Clark’s typo spelling Monken’s name was a Freudian slip.

UPDATE:  For comparison’s sake, here are some of Alabama’s numbers.

Can't be a dominant force in the SEC if less than 40% of your runs work to start a set of downs. Where will Saban turn to "fix" things is of course one of the burning questions the next few weeks.