It’s an exercise he goes through every spring, and he’s been ten for ten the last three years.  Here’s his prediction for the first top ten list of this season:

Is ESPN’s coverage of Georgia’s opener going to be so over the top that it’s a turnoff?  Asking for a friend…

When I worked for ESPN full time, I put out a weekly article entitled the Vegas Power Ratings. I still have all the sources that I used to produce that article as it featured my plus/minus ratings which closely resemble Vegas’s numbers as well as three different casinos including the fine folks over at the Westgate Las Vegas Sportsbook @SuperBookSports.

This is not the AP poll but gives you an idea of how much teams would be favored over another team if they met on a neutral field. 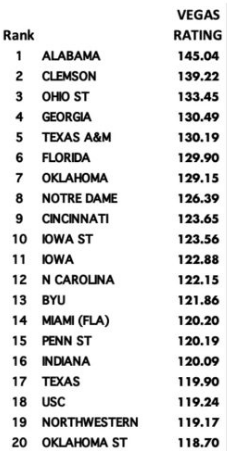 All 14 SEC teams are in his top 25, including the entire top eleven.

He’s about the only one I’ve seen rank Georgia’s schedule easier than Florida’s.  Not that there’s anything wrong with that.

It’s a little hard to read (duh!), but that doesn’t stop the last line of Steele’s analysis of the Georgia-Alabama game from stinging:  “Dawgs have led or been tied with Bama 119 of 120 min in L/2 games but lost both.”

After I got it, I spent the first hour doing what I do every year: figuring out his take on the Dawgs.

His 2020 Preview isn’t too high on Georgia’s prospects.  He does favor UGA to win the SEC East, but his preseason Top 40 has Georgia sixth, behind two SEC teams, Alabama (natch) and Texas A&M (!).  His Power Poll has Georgia seventh, behind those two SEC teams and LSU.

There are several reasons I gleaned for that.

His national unit rankings are revealing.

In conference unit rankings, Georgia is in a six-way tie for first at quarterback, which, if you think about it, is a great way to show how mediocre the conference picture is at that position.  Georgia is also first at defensive line and linebacker.  Its lowest ranking, sixth, is at special teams.

If there’s one puzzling thing, it’s how little mention he makes of the change at offensive coordinator.  He cites Monken’s resume, but that’s it.

It’s not a bad picture overall, but considering that Georgia was third in his 2019 Power Poll, it does come off as something of a let down.

Around the horn in college football:

Filed under College Football, Georgia Football, Phil Steele Makes My Eyes Water, Recruiting, SEC Football, See You In Court, Strategery And Mechanics, The Body Is A Temple, The NCAA

My favorite thing I learned writing this @philsteele042 story? At one point, Phil got down to 6-point type. When people started asking him to include a magnifying glass with each magazine, he decreed that he would use nothing smaller than 8-point type. https://t.co/jHVURwD1TI pic.twitter.com/ApEGPni86J

There’s a reason Steele’s category here is named what it is.

Breaking News. We just finalized a deal with Barnes and Noble to distribute this years magazine!!
The 2020 Phil Steele College Football Preview will be sold in all Barnes and Noble @BNBuzz locations and available around July 24.

You can’t keep a good magazine down.

We have finalized the specifics of the 2020 magazine.
Last page goes to press July 7
Not available on newsstands this year
Start shipping pre-orders out of office July 20 – Priority Mail
You can order today https://t.co/XBixEEM57t
Five more coaches interviews today.

Though it will be sad not to find it on newsstands this year.  Damn you, COVID-19!

One last snapshot from the Preview, and then you’re on your own.  (Buy the mag, in other words.)  Here’s his four preseason conference teams.

That’s 116 players in total.  Here’s the breakdown by individual teams, with the first team numbers in parentheses:

And a few random observations: