Category Archives: The Body Is A Temple

All in, in College Station.

Full speed ahead at Texas A&M:

“Our approach as we sit here today on February the 23rd is that we will operate at full capacity, that we’ll have full stadiums,” he said. “We’ll have the full experience. We’ll have the Aggie band back on the field. We’ll do all the things that we normally do.”

He’s not being stubborn or insane — “If we have to pivot, we know we can,” Bjork said. “The virus will dictate.” — he’s merely being aggressive in making plans.  I’ll be curious to see how quickly any of his peers jump on the bandwagon.  Or if Sankey feels a need to weigh in.

Filed under SEC Football, The Body Is A Temple

G-Day, and butts in the seats

The plan is about what I expected.

As for FY 2022, which runs from July 1 of this summer to June 30, 2022, UGA’s financial picture will be dictated by whether a full football schedule will be played before capacity crowds. They’re tentatively planning on full stadiums.

“We’re going to be ready for that,” Brooks said. “But we can’t commit to a budget until we know where we sit next fall. So, we’re going to have to play a lot of that by ear. But we’ve proven we can pivot quickly, and we’ll adjust from there if needed.”

At least for the April 17 G-Day intrasquad game, Georgia is planning for the same limited-season, socially distanced plan that it utilized last fall. That allowed for 20,524 spectators in the 92,746-seat stadium.

By “tentatively”, they mean “unless the pandemic puts a gun to our head, we’re filling the damned stadium, thank you very much.”  Let’s hope the science keeps up with the game plan.

As far as G-Day goes, well, the devil’s in the details.  I can’t imaging they’re planning on handling the crowd on the basis of first-come, first-served, so that leaves either a random lottery or some sort of ticket purchasing plan to cover allocation.  As a side issue, is the school ready to tolerate tailgating in some form or fashion this spring?  Stay tuned.

Today, in doing it for the kids

College football players sustained far more concussions during practices than they did in games, medical researchers reported on Monday, a finding certain to add to the years long debate about regulating training regimens across the sport.

… The authors of the new study, published in JAMA Neurology, a peer-reviewed journal, found that 72 percent of the concussions they reviewed over five college football seasons happened during practice. And although preseason training accounted for about one-fifth of the time the researchers studied, they found that nearly half of the concussions occurred during that period.

The report will fuel the longstanding debate about safety in college football, but changes do not appear to be imminent.

… and pretty soon you’re talking about real money.  A shit ton, as a matter of fact.

The NCAA’s cancelation of last season’s Division I basketball tournament because of the COVID-19 pandemic resulted in a $600 million annual decline in the association’s total revenue for its 2020 fiscal year, its new audited financial statement shows.

The document, a copy of which was obtained by USA TODAY Sports, showed a $700 million decline in television and marketing rights revenue, nearly all of which came from the NCAA’s multimedia and marketing rights contract with CBS and Turner. In the association’s 2019 fiscal year, it reported nearly $868 million in such revenue

The NCAA received $270 million from event cancelation insurance, the statement said, but that covered only a small portion.

Although I can’t help but wonder what Emmert would do if players collectively decided to sit out March Madness unless the NCAA dropped its opposition to their NIL rights.  Besides shit his pants, I mean.

Filed under It's Just Bidness, The Body Is A Temple, The NCAA

“Football season’s over,” Courson said. “But COVID’s not.”

The 2020 season may not have been the on-field success we hoped for, but the Georgia football program definitely did well combating the pandemic.  As Seth Emerson notes ($$), there never was an outbreak that spread through the team and only one staffer was hospitalized.

No doubt there were plenty of reasons behind that success — one that I assume the staff has trumpeted on the recruiting trail to parents, and why not? — but the biggest one is something pretty simple.  The program took the thread of the pandemic seriously.

Inside the building, there was no politicizing of mask-wearing, social-distancing or otherwise.

Naturally, that started with Smart, but everyone followed his lead.  Well played, y’all.  Keep up the good work.

Is it just me who finds Greg Sankey’s sanctimonious posturing a wee bit distasteful?

Sankey's conference nearly had Keyontae Johnson die because of myocarditis and he has the balls to say this pic.twitter.com/jg8tSb4YoM

Now Brian’s an unabashed SEC hater, but he’s not wrong there.  Sankey took a gamble, just like every P5 commissioner did (or, more precisely, every president of a P5 school did).  Yeah, sure, you can mock the Big Ten for its about face if that makes you feel superior, but Brian’s point about Johnson should sting, assuming Sankey gives a shit about anything besides the bottom line. 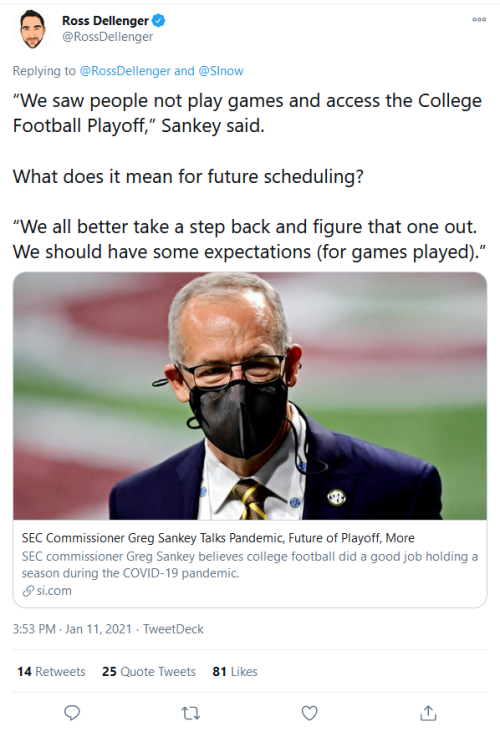 Anyway, what I find troubling about Sankey’s comments is stooping to use a horror show of a year as a reason to work the refs in order to force every other commissioner to march in lockstep with the lowest common denominator.  Not that my opinion is gonna change anything, at least as long as the checks keep rolling in.

Filed under BCS/Playoffs, SEC Football, The Body Is A Temple

UGA football five-star QB signee Brock Vandagriff will not need surgery on the torn posterior cruciate ligament (PCL) in his right knee and will instead rehab, his father, Greg, told the Athens Banner-Herald.

Ron Courson, UGA football’s director of sports medicine, met Tuesday morning with the Vandagriffs and chose rehab as the best course of action instead of surgery that sometimes doesn’t completely repair the ligament.

“PCL surgery is not an exact science and they don’t like the results that they get typically,” Greg Vandagriff said. “It doesn’t guarantee that it is corrected and that most athletes at higher levels can play without a 100 percent functioning PCL.”

Courson and trainers believe with proper rehabilitation that the injury will not be problematic for the top-15 player in the 2021 class.

“Their studies have shown that they just need to build up the muscle around the quad, around the knee and it’ll take care of himself,” Greg Vandagriff said.

Good to see no surgery is recommended.

ESPN’s Kirk Herbstreit says he has tested positive for COVID-19 and will have to call the College Football Playoff semifinal between No. 2 Clemson and No. 3 Ohio State from home.

Herbstreit posted Tuesday night on Twitter that he was feeling good and his family is OK.

He said he will still be part of College GameDay on the morning of Jan. 1 and on the call of the Sugar Bowl with play-by-play announcer Chris Fowler in New Orleans that night.

This is my favorite week of the year. I was so excited to head home, to DFW, to call the @CottonBowlGame and then to be on the radio call for @rosebowlgame.

Unfortunately, I tested positive for COVID.

I’m disappointed, but I feel good and hope to be back soon. Appreciate y’all!

Filed under ESPN Is The Devil, The Body Is A Temple

While Georgia is still testing three times a week, the Bearcats are testing just about daily, Fickell said, and “still asking our guys to make sacrifices. … One bad day can lead to a lot of different things.”

There have been enough hints and whispers to suggest that Kirby Smart is holding his breath about who will and who won’t be available to play Friday in the bowl game.  As I mentioned yesterday, cross your fingers those Wednesday tests come back with nothing but good news.

It’s gonna be a close call, and maybe not just for players.

Players were able to return home for a few days around the Christmas holiday.

It came during a week where the state had a 14.3 percent positivity rate, higher than the peak of the summer surge, according to Amber Schmidtke, a public health microbiologist who tracks Georgia cases for her Daily Digest. The weekly case total for 18 to 29 years olds in the state has risen 189 percent in the last eight weeks.

Smart is prepared in case he would be affected by COVID protocols like some of his SEC colleagues.

“Every time I test it’s a concern of mine,” Smart said. “I’m not going to share that exact plan because it hasn’t had to come to fruition. But we’ve been through it and talked about it, and have things available for Skype meetings, for Zoom meetings, to sit in team meetings, to be in practice by way of Zoom meetings, to have someone be in charge of gameday decisions. Pretty much everybody in the country has that now.”

It would really suck to get this far, especially after losing the last regular game of the season, and then be tripped up by COVID.

Georgia, it turns out, is specializing in five-star quarterbacks who need rehabbing from knee injuries.

Five-star quarterback Brock Vandagriff played the final 10 games of the season with a torn posterior cruciate ligament (PCL) in his right knee but managed to play through it and lead the team on Monday to a Class A private state championship.

Vandagriff is expected to meet Tuesday morning with UGA football director of sports medicine Ron Courson to set a plan for surgery and a path to recovery.

“We have a doctor’s appointment with Courson in the morning at 8 and we have to go through and check some stuff and see where he is,” said Greg Vandagriff, Brock’s father and Prince Avenue Christian’s head coach. “It’s just gotten worse and we realized he’d probably need surgery. Not everybody needs surgery but his is to a point where he does need surgery so we’ve got to deal with it.”

Makes you wonder if Kirby is incorporating a Courson sales pitch into his recruiting chats with parents.  If he hasn’t already, maybe he should.