Good morning, campers!  Don’t forget to pick up a tray on your way to the buffet line.

Filed under Academics? Academics., Because Nothing Sucks Like A Big Orange, Georgia Football, It's Just Bidness, Nick Saban Rules

The SEC’s “decades-long tradition that’s been in place”

You know, before you read this post, think about what traditions are left for the Southeastern Conference to hold near and dear to its collective old heart.  This is, after all, the place where football teams can go over a decade before visiting some stadiums in the other division and the place where basketball schedules seem to be set almost on a whim.

So what is Greg Sankey feebly defending the honor of?

The NCAA this week is likely to abolish long-standing legislation outlawing alcohol sales at its championship events.

The NCAA Division I Council is set to vote on a proposal to eliminate a policy that has long kept booze out of championship events. The governing body for college athletics has used a waiver the past two years to sell alcohol at various championships, including the College World Series.

Such a waiver would no longer be needed if the council approves the proposal at meetings Tuesday and Wednesday in Indianapolis, which is expected.

The potential decision only furthers the growing push from some SEC schools — LSU included — to lift the league’s ban on stadium-wide alcohol sales. Commissioner Greg Sankey on Monday insisted that it won’t be “easy” to overturn such a “decades-long tradition that’s been in place,” he said during a panel discussion at the APSE Southeast Region meeting at Samford University.

The NCAA’s decision is only a “data point,” he said, in the conversation and not a “determinative for our direction.”

The no-brainer here would seem to be to let each conference program decide what’s best for itself with regard to beer sales, but that’s not how the SEC rolls.

“We have some that would like to remove the policy and have others that have no interest in that,” Sankey said. “From a stadium wide (standpoint), there are those that think ‘Let’s just take the restraint off the conference level.’ But that’s not a unanimous or, I’m not sure right now, a majority position.”

Do I detect a faint whiff of the Georgia Way here?  Why, I believe I do.  Stadium booze is only for those who can hold their liquor; it’s a lucky coincidence that only those in the fancy seats are capable of that.

I still think at some point in time the dollars will rule.  It’s too easy a revenue stream to ignore forever, but in the meantime, I guess it’s hard to put a price tag on feeling holier than thou.

A beer and a fashion statement

Courtesy of reader Bourbon Dawgwalker, I’ve been alerted to what sounds like a stylishly refreshing malty beverage. 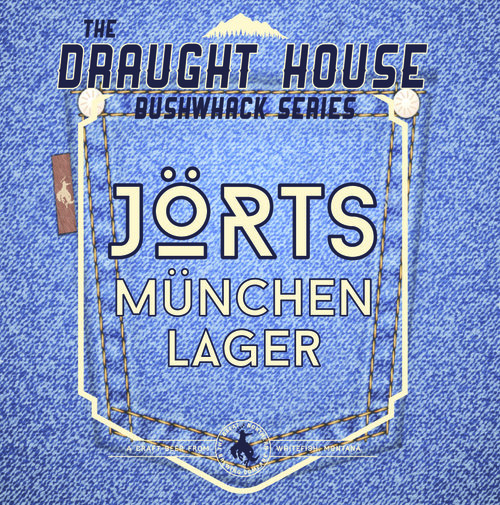 If that doesn’t sell you, see if this doesn’t set your mouth watering.

Randy exhaled a shallow sigh of temporary relief. His Gators just made first down with a minute and a half to go. All they need is a few more yards to go to be within kicking range. Three points to win the game. Dagnumit, they really need this win after their loss last week. Adjusting his favorite shorts that he had fashioned from his favorite pair of Wranglers, Randy remembered those ribs smoking on the grill need to be flipped. His lawnchair creaks as he gets up. Ambling over to his Weber, he grabs another pale lager from the cooler.

Sadly, it doesn’t appear that Jorts is distributed outside of the Northwest.  Sure would make for a great addition to any Dawg’s Cocktail Party cooler.

Filed under Gators, Gators..., I'll Drink To That

This may be the most perfect marriage of beer and university yet.

I don’t think the school currently allows beer sales in the stadium, but I imagine until then, it’ll do fine at tailgates.

Filed under I'll Drink To That

So, one year in to Ohio State selling beer in the stadium, it turns out sales generated more than $1 million in revenues and school officials report they actually experienced fewer problems with fans at games this year than in previous years.  Sounds like a win-win to me.

Now, if they could just do something about their fans’ taste in cold malty beverages.

Filed under Georgia Football, I'll Drink To That

These football games are making me thirsty.

Ohio State raised more than $1 million in its first year of stadium beer sales.  (And look at some of these other numbers.)

I really don’t see how McGarity can ignore that kind of revenue stream forever.

A former B-Mer is returning to Athens.

Josh Brooks is returning to Georgia for a high-level job in the athletic department.

Two and a half years after leaving the school, Brooks is on the way back to become executive associate athletic director and chief operating officer. He has resigned as deputy athletic director at Louisiana-Monroe to take the UGA position, according to the Monroe News Star and NBC10news.net.

He brings with him an interesting entry on his updated resume.

He was hired away from Georgia to become athletic director at Division III Millsaps College in Jackson, Miss., where he drew attention to the school by adding a beer garden and kids’ zone to home football games.

What’s that… “beer garden”, you say?  Hmmm.  My first thought is that nobody’s gonna care.  Then again, if McGarity can hit up contributors for the cost of the improvements like he has the IPF and baseball stadium, what’s the downside to picking up a new revenue stream with no upfront expense?  And that’s before you even get into the bidding for naming rights…

Today is a holiday.

You can never have too much beer.

Fun fact: 545,000 beers were ordered for the Battle at Bristol on Saturday between… https://t.co/gVOLw9gicb pic.twitter.com/iODrhcIjOJ

What really sells that picture are the beers being stacked up in front of a funnel cake stand.

Though, now that I think about it, that’s only a little more than three beers per fan in attendance.  I guess the kids will have to drink less.

Filed under I'll Drink To That

Today, in beer is coming

Here’s something you wouldn’t have heard ten years ago.

New Belgium Brewing has given the school $4.3 million towards the construction of an on-campus football stadium. Both New Belgium and Colorado State are located in Fort Collins, Colorado.

“We’re delighted to expand our partnership with New Belgium Brewing – and to honor the innovative, entrepreneurial spirit of our community by highlighting a tremendously successful, home-grown brand at the new stadium,” CSU president Tony Frank said in a statement.

A school “in partnership” with a brewery… what’s the world coming to?

And think of the naming possibilities at Georgia.  Greg McGarity’s mouth is probably watering just thinking about it: “Marjorie, get Don Leebern on the phone for me, please.”