Well, now… this is interesting.

In 3-page letter, obtained by @Stadium, Power 5 league commissioners ask Congress to “enact clear national policy on NIL & not wait for NCAA process to conclude” & “so there will be uniform national standard that will preempt state NIL laws. … time is of the essence.” pic.twitter.com/VbaRCHTGXL

After stalling all this time through the antitrust litigation and sitting back watching state legislatures react, now, suddenly, time is of the essence.  Right.  It’s not exactly a vote of confidence in the NCAA getting the job done.  (And wouldn’t you love to hear the conversation when the P5 commissioners speak with Emmert about this?) 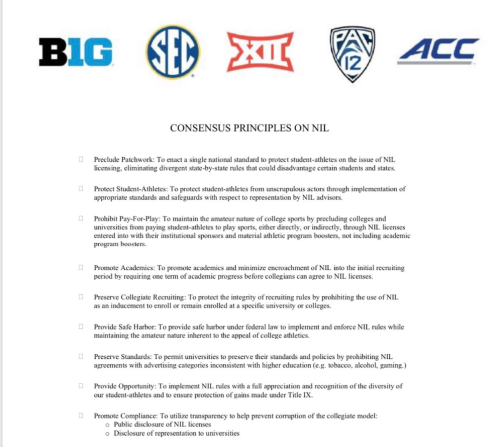 Some of this is fairly anodyne.  Some of this has the potential to be troubling — “prohibiting the use of NIL as an inducement to enroll or remain enrolled” sounds like a worthwhile goal, but prohibiting how, exactly?  If we’re talking about criminalizing the NCAA rule book, that’s a cure that could be worse than the disease.

But the real wants are two:  “Prohibit Pay-For-Play” is an attempt to make it illegal for schools to compensate college athletes directly, while “Provide Safe Harbor” is an antitrust exemption for doing so.  All that in return for allowing less than what the emerging state laws would permit.  Such a deal, in other words.

Based on their public comments, I can’t imagine there are too many members of Congress that are ready to jump on an offer like that.  On the other hand, the chance to bypass Mark Emmert might be tempting.  It’ll be interesting to see if this has any legs.